There’s a Scientific Reason Why We Love Fall 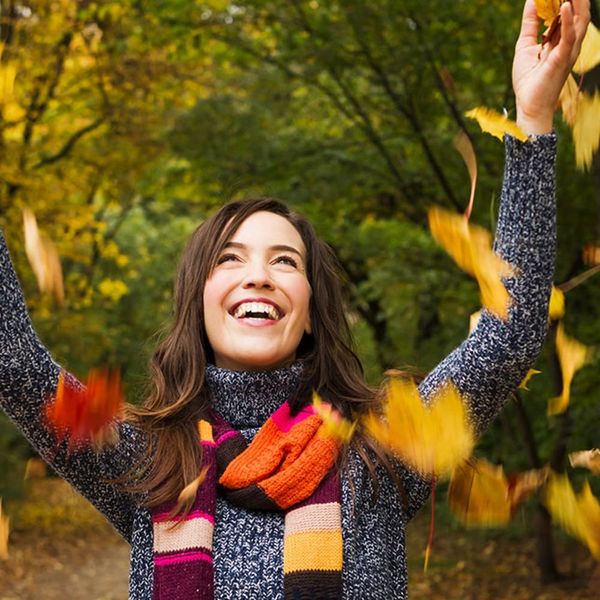 Summer is coming to an end, and you know what that means: Fall is on its way. Starbucks has launched its famous pumpkin spice latte (already?!), your favorite stores are bringing out the cozy sweaters and scarves, and your local Target is fully stocked with back-to-school gear. If you’re a die-hard autumn lover who gets giddy with the chilly weather and colorful foliage every year, you’re definitely not alone. According to one survey, 29 percent of Americans say fall is their favorite season. And it seems that there’s actually a legitimate scientific reason for all the warm, fuzzy feelings we have for fall.

In an interview with The Huffington Post, Dartmouth sociology professor Kathryn Lively explained that many of us have been conditioned from a young age to anticipate — and love — autumn and all the fun milestones that come with it. “As children, we come to associate fall with going back to school, new school supplies, seeing friends. It’s exciting, for most. We still respond to this pattern that we experienced for 18 years,” Lively said.

Think about it: For many of us, the crisp air and changing colors of the leaves in fall represent a new beginning. Whether we’re going back to school or not, the transition from one season to another — in this case, summer to fall — can summon the same emotions we experienced going back to school as kids, which might inspire us to try new things, learn a new subject, or make a change in our lives.

In fact, scientific research on the concept of “temporal landmarks” shows that special times like birthdays or holidays — for fall, that’s back to school, football season, Rosh Hashanah, Halloween, and Thanksgiving, just to name a few — can play a big role in bolstering our sense of motivation. Another study showed that just like the beginning of the new year, temporal landmarks promote the feeling of a fresh start, which can inspire “aspirational behavior.” (And you thought it was just all the pumpkin spice lattes!)

Fall also brings with it a noticeable shift in routine. With the arrival of the autumn months, the slow, laid-back pace of summer evolves into a more regimented, fast-paced schedule, which for some personalities can be a powerful motivator for getting things done and even for feeling more mentally balanced. And depending on where you live, there’s also the impact of the cooler temps on morale. Research has also shown that in many cases, warm weather can negatively impact our decision-making capabilities, whereas cooler weather helps us think more clearly. The drop in temperature could also bring a respite from summer depression.

Unsurprisingly, Lively said there’s also likely a sociological basis for loving autumn because we see it as a comforting time — think snuggling up in a chunky sweater and lounging by a crackling fire. (Speaking of which, did you know that thanks to evolution, humans are wired to find comfort in the warmth of a fire?)

Sounds like it’s time to break out the candles, oversized sweaters, and warm flannel pajamas, and get cozy!

What’s your favorite thing about fall? Tell us on Twitter @BritandCo!