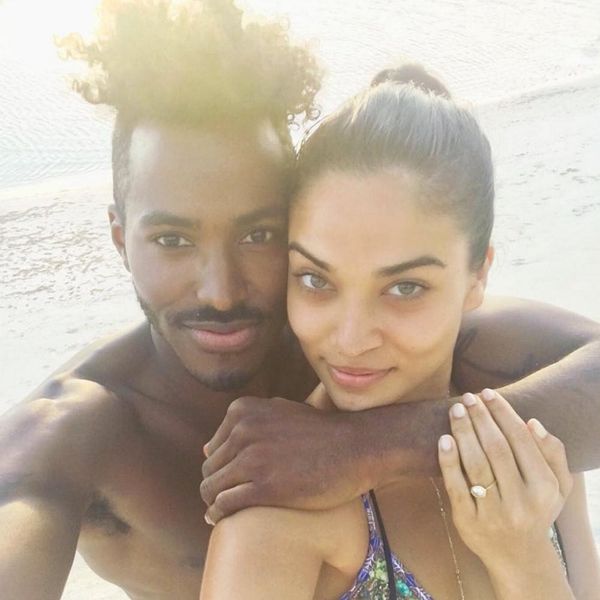 The holidays (and post-holidays) are a hard time to be single. Just when you get over all the romantic winter dates you’re missing out on, social media slaps you in the face with seemingly endless stories of your friends getting engaged over Christmas and New Year’s. But it’s not just your friend getting hitched this time of year, celebrities are doing the same. Just yesterday, Pitch Perfect’sAnna Camp got engaged and a dreamy Instagram put Julia Stiles’ engagement ring on full display. Now, VS model Shanina Shaik and her boyfriend DJ Ruckus are sharing the details of their engagement and TBH, it’s just too epic to be annoyed about.

According to People, DJ Ruckus (AKA Greg Andrews) called up his cousin Lenny Kravitz to borrow his private beach in the Bahamas (because that’s a thing). Ruckus wanted to propose the day after Christmas but because there is no FedEx delivery on Christmas Day, naturally he asked his buddy Denzel Washington and his wife to come and bring the rings in person from LA. We repeat: RINGS.

Ruckus recruited celebrity-approved jewelry designer Lorraine Schwartz to help him design two rings so that Shanina could pick her favorite. She ended up opting for a large gold hexagon-cut diamond, that has the couple’s initials engraved in diamonds and amethysts (Shaik’s birthstone) under the ring. After she said yes, the two celebrated by FaceTiming some of their closest celeb friends and partying on Lenny’s private beach with their nearest and dearest.

Cool, so we’re just going to back to binge watching Making a Murderer with our cat now…

Cortney Clift
Cortney is the senior writer and special projects editor at Brit + Co. She typically covers topics related to women's issues, politics, and lifestyle. When she's not buried behind her computer you'll find her exploring New York City or planning her next big adventure.
Engagement
Celebrity News
Engagement