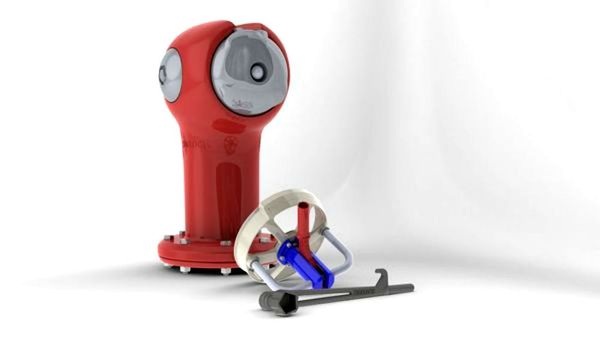 Fire hydrants aren’t something we usually think of until we get a ticket for parking next to one. But retired NYC firefighter George Sigelakis has spent a lot of time thinking about them. He’s been working on revolutionizing the century-old design for about 20 years at his company Sigelock Systems. They’re now the proud makers of the Sigelock Spartan Hydrant, which is the world’s first sustainable, fully secure fire hydrant.

If you’re of the mindset “if it ain’t broken, don’t fix it,” well… it actually is broken. Fire hydrants are made from cast iron. Over time, cracks and leaks start to become a problem. In a 2013 report from Newark, New Jersey, the city found that one in seven fire hydrants do not work. In fact, on a hot July day in 2012, a fire broke out in an abandoned building; firefighters arrived within minutes to fight the blaze, yet there was a crucial element missing — water. It took two hours, claimed five lives and destroyed a family residence before the water issue could be resolved.

Another problem is that fire hydrants are easy to open. And on a hot day, it’s a tempting way to cool off, using up precious water resources. Sigelock Systems tackles both of these problems head on.

Dubbed as “a maintenance-free hydrant,” the cast iron technology from before has been fortified with a mixture of stainless steel, ductile iron and a powder coating that’s powerful enough to resist rust and corrosion from even the toughest environments. The Sigelock is also nearly impenetrable. Its nozzles, outlets and operating nuts are completely encapsulated with a tamper resistant lock. To prevent unlawful water usage and unauthorized access, the revolutionized fire hydrant requires a special tool to open it.

So does the Sigelock hydrant do its job? Only time may tell. Sigelakis stands by his design but notes, “Rome wasn’t built in a day. It was built brick by brick, pebble by pebble.” Sigelakis is slowly paving the way for the Sigelock hydrant, as he travels across the country sharing his invention in hopes of convincing communities to plant the first “pebble.” Since 2010, there have been 150 Sigelock hydrants installed throughout small communities in 11 different states. So far, not a single one has required maintenance.

Would you introduce the Sigelock Systems fire hydrant to your community? Share your thoughts below

Michelle Swift
Michelle Swift is a freelance writer and blogs on michelleswift.com. She has an affinity for running, culinary eats, travel and sparkly gold things. People and adventure light her up like a hot pink neon sign!
Tech