The Most Affordable Automatic Standing Desk Ever 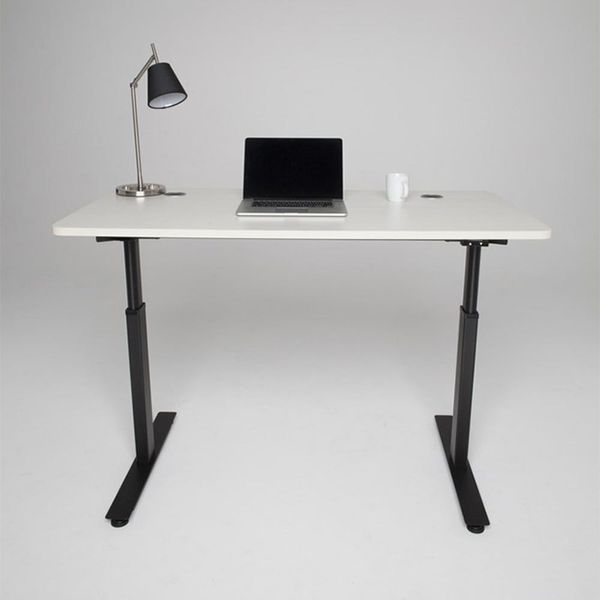 In case the numerousstanding desks on the market haven’t already let you know, sitting is killing you. We’re not even being dramatic. Even NASA says so. But rather than focusing on our demise, let’s look at the latest standing desk that will keep us around for years to come. It goes by the name of Stand Desk and is currently raising funds on Kickstarter.

After getting in a motorcycle accident, creator Steven Yu had some pretty, pretty, pretty bad chronic back pain. He asked his doc if there was anything he could do to lessen it, and doc said, “Don’t sit down at your office.” As much as most of us want to stand all day, standing desks are, like, cray expensive. So Steven did what any determined and innovative guy would do: He made his own with a bunch of bells and whistles.

First off, this desk moves up and down with a touch of a button. You have the option to get memory that will allow you to store four preset heights. So your desk remembers that you want it at 44” when you’re standing and at 20” when you’re sitting… because you still might want to sit every once in a while. It’s been tested to carry over 225lbs. So if you want to keep your dumbbells on your desk, you can do that. Your desk will still go up and down.

Then there are add-ons that you’re going to want. Like a surge-protector parking spot and a grommet hole so your cords don’t end up taking over that valuable work place.

We’re also pretty pumped that there are style options. The frame comes in matte black, gloss grey and a TBD color, soon to be picked by users. The desk surface can be made in eco-friendly bamboo, frosty white and midnight black. We’re kind of fans of the bamboo surface and will probably just washi tape the hell out of the frame no matter what color it comes in.

Oh, and if you need some numbers to convince your boss to spring for Stand Desks for the whole office, maybe drop this little factoid: Standing desks increase productivity by 10%. Blamo.

If you don’t think standing desks are going to be filling offices everywhere in the not-so-distant future, maybe this will convince you. Stand Desk reached their Kickstarter goal of $50,000 in 38 minutes flat. They’re currently sitting pretty at over $300,000 and still have over a month of fundraising to do.

The Early Bird Special is already gone, but you can still get your own Stand Desk by pledging $399. At the rate they’re getting funding, you best be making claim on yours now, before they’re sold out.

As Steven, the creator, aptly notes, “You may not have time for diet or exercise, but you always have time to stand.” Touche, Steven, touche.

Ready to pledge your bucks to Stand Desk? Let us know in the comments below!

Lex Monson
Alexis is the co-founder of Punkpost, the app that lets you send handwritten cards (yes, handwritten by a real human) in the amount of time it takes you to send a text message. The exclusive card collections are created by a community of artists and designers and hand letter pressed on high-quality cotton paper. Get the full experience by downloading the app from the iTunes Store.
Kickstarter
Health
Kickstarter Office