‘This Is Us’ Star Sterling K. Brown Made History at the 2018 SAG Awards 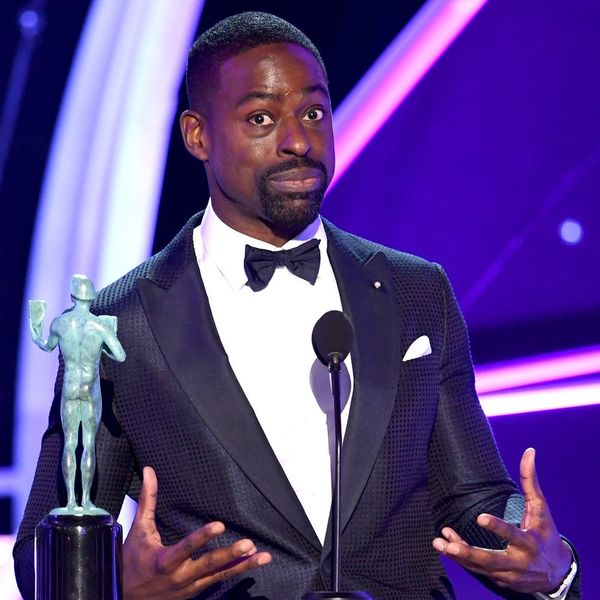 The 2018 Screen Actors Guild Awards ceremony was one for the history books. Not only was it the first time the show has ever had a host (in the funny and heartfelt Kristen Bell, no less), but the entire show was also presented entirely by women. There was an historic win too, as This Is Us star Sterling K. Brown became the first Black actor ever to receive the Best Actor in a Drama Series award. He was up against Ozark‘s Jason Bateman, Stranger Things‘ David Harbour, Game of Thrones‘ Peter Dinklage, and Better Call Saul‘s Bob Odenkirk for the award.

“What a blessing it is to do what you love for a living,” Brown said during his emotional acceptance speech. “What an honor it is to be recognized by your peers for a job well done.”

Brown also acknowledged his TV family, the Pearsons, with a joking reference to Jordan Peele’s hit movie Get Out. “To my glorious cast of This Is Us, you guys feed me day in, day out,” he said. “To my white family, which is thankfully nothing like the family in Get Out, I love you. To my TV wife, Susan, let’s keep on repping for the people. To the two other young actors that play Randall, to Lonnie and Niles, thank you for making the work so easy and seamless.”

Fans were ecstatic about Brown’s win, taking to Twitter to enjoy the actor’s moment in the spotlight.

Brown’s role as Randall Pearson in the hit NBC show also earned him an historic win at the Golden Globes earlier this year, when he became the first Black actor to win Best Actor in a Television Series, Drama, in the ceremony’s 75-year history. In September, he also picked up an Emmy for his role, making him the first Black actor to win the category since 1998, when Andre Braugher took the award for his role on Homicide: Life on the Street. Congrats to Sterling K. Brown!

Were you happy to see Sterling K. Brown win another award? Let us know @BritandCo.