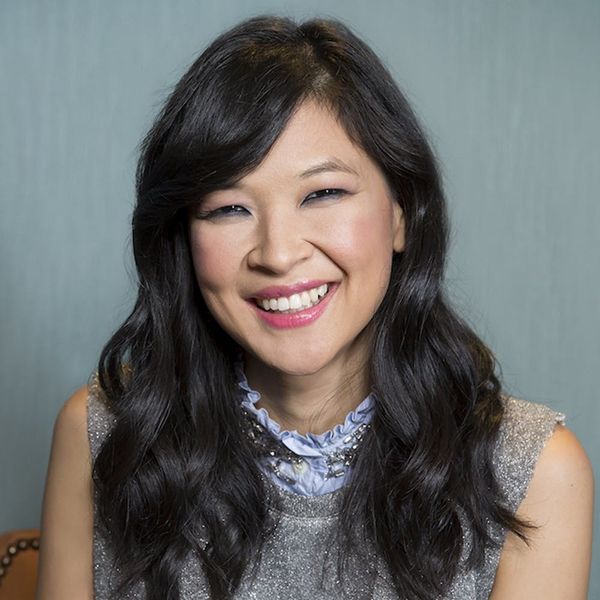 SuChin Pak is many things — mother, wife, daughter, reporter and the first Asian-American correspondent on MTV. Ever. Back in its heyday — we’re talking ’90s to ’00s when boybands and teeny bopper pop stars still ruled the charts — MTV was at the very hub of American culture, and SuChin Pak was in our living rooms on a very regular basis. To most, she seemed to be living the dream, but in reality, SuChin couldn’t even rent an apartment in New York City on her own. They say it’s impolite to talk about money, but it’s what SuChin talks about a LOT now — on her new podcast and with us. She has some seriously sage advice about what to do with your hard earned dolla dolla bills. Believe us, you’re going to want to take notes.

“The subject of money, when I really sat down and thought about it, it is at the center of who I am and I think a lot of people would agree with that,” SuChin tells us. “It’s a source of tension or happiness or whatever. There’s always such an emotional reaction to that question.”

These days, SuChin is less into rubbing elbows with teenage pop stars, and more into working on more personal ventures — projects that are almost a form of personal expression. Her latest collaboration with Umpqua Bank is a podcast series called Open Account where she has candid conversations with guests (NBA player Meyers Leonard, chef Eddie Huang who authored Fresh Off the Boat and SNL actress Paula Pell have all made appearances on her show) regarding the rather taboo subject of money. “I didn’t want to talk about money in the general sense like, does it buy happiness? That I think is a very common conversation. But I get down to the [questions like] what’s the number that feels right for you in your bank about, what do you do with your paycheck? I wanted to get to the really nitty gritty of it,” she says. And SuChin is not afraid of the nitty gritty. We asked her what her greatest financial mistake was and ish got honest.

“The worst financial decision I ever made was to put the down payment of my car on my credit card in college, which then spiraled into just an enormous amount of credit card debt because I really couldn’t afford the down payment or the car,” SuChin says in her weekly intro for Open Account. “I kept putting that on the credit card and then on multiple credit cards. Nobody taught me how to use a credit card. My parents never had a credit card, they never had a debit card. There was nothing like that. I’m sure they had a bank account, but that was never a part of our conversation at home.”

It began when she was a bright-eyed young college freshman. She did what a lot of us did — opened up her freshmen welcome packet, listened to one of those flyers encouraging her to get a credit card and signed up. Then she bought a car with it — a debt she ended up carrying around for 15 years. “That was the most expensive, cheapest car ever bought from that dealership,” she says with a laugh. “From that point on, I’ve always used the credit card like a bank card, meaning I never spend on my credit what I can’t cover in my checking account.”

Since then, SuChin has gone on to carve out an impressive career for herself, gotten married and had kids. We asked her what sort of financial lessons she most wants to impart on her three-year-old son. “Credit card definitely is one,” SuChin is quick to say. “Linked to the credit card is ownership of your credit score. Having lived in New York and even when I was making a really pretty decent living working in television, I couldn’t rent an apartment because my credit was so bad. Nobody told me that this thing you kind of carry it around with you and it can help you or prevent you from doing very basic things like getting your own apartment or a loan.”

And that’s exactly what she hopes to accomplish, not only as a parent but with her podcast. “I wish someone would have explained this to me very early on. And being mindful of making sure your payments are on time. The other thing too is the act of saving… everyone says this, and they say it for a reason. I think even if you’re starting out and you’re saving just a little bit, it doesn’t seem like very much, but the practice of saving — of [thinking] the first person you pay is yourself, and cutting off a piece of whatever you’ve earned and putting that straight into the bank — it’s a muscle. It should be reflexive.”

Because of the money lessons she’s had to learn, as a college student with steep credit card debt and also as the child of immigrant parents who didn’t use credit cards, money is truly an emotional subject for her. “I think I have a lot of guilt and I have a lot of fear when it comes to money,” SuChin tells us frankly. “I think that I tend to always have a feeling of lack when it comes to money and I think that has a lot to do with how I grew up.”

For her kids, she wants something different. “I hope that my kids will understand that you can be responsible and save, and when you spend responsibly, it should be a very freeing process,” SuChin says. “I want to give them some basic building blocks, so that when they do spend the money, they can feel really good about it.”

“Spending has never been a freeing thing for me, so I hope that’s something I can teach them,” she says. “It’s something they should be proud of.”

What’s the worst financial decision you’ve ever made and what sort of advice would you give others on how to avoid it? Tell us in the comments below!

Kimberly Wang
Kimberly Wang writes about all things pop culture, tech, style, and beauty. She's a Bay Area transplant and has an MFA in Creative Writing from Columbia University. On a sunny New York day, you can find her hanging out with her mini schnauzer Isabelle Jellybean on a blanket in Central Park.
Interview
Home
Interview Money