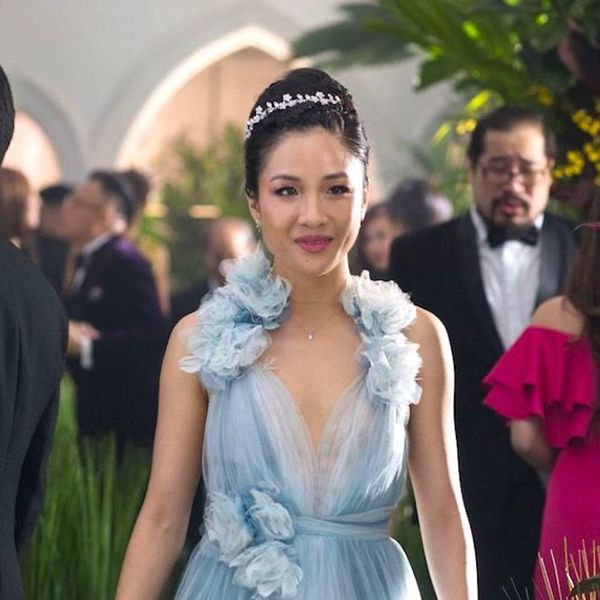 Summer’s a time for enjoying the outdoors, vacations (hopefully), and all the warm-weather activities you can fit into your schedule. But luckily, when you’ve hit peak sun exposure or you just need a night inside, there are a plethora of must-see movies coming down the pike. We like our films with a healthy dose of fashun, and this season does not disappoint. Ahead, eight flicks coming out this summer 2018 that we’re putting on our watch list. Pass the popcorn.

A flick that centers around the Met Ball? Count us in. This all-female version of the Ocean’s 11 franchise stars Sandra Bullock, Cate Blanchett, Mindy Kaling, Sarah Paulson, Awkwafina, Rihanna, and Helena Bonham Carter (enough star power for you?). The group, led by Danny Ocean’s estranged sister (Bullock) plans a heist at fashion’s biggest night of the year. The target: Anne Hathaway as Daphne Kluger, a celebrity wearing a necklace worth around $150 million. Suffice it to say, they had us at fashion — then kept us at girl gang. Bring it on. (Photo via Warner Bros. Pictures)

Based on the first of the trilogy book series, this film introduces us to Rachel Chu (Constance Wu) as she joins her boyfriend, Nick (Henry Golding), on a trip to his best friend’s wedding in Singapore. There, she discovers he’s basically one of the country’s most eligible, wealthiest bachelors — as in, Prince Harry status (up until recently anyway). She’s then forced to contend with being thrust into the public eye and has to fend for herself against jealous rich girls and Nick’s mother (Michelle Yeoh), who is convinced Rachel isn’t good enough. Between the rich, eccentric family members and glamorous partygoers, the cast’s wardrobe is basically dripping in extra-ness. As author Kevin Kwan told Fashion magazine, “We want this to be a defining fashion movie in the way The Devil Wears Prada was, and, maybe, hopefully even exceed that.” Oh, we are so here for it. (Photo via Warner Bros. Entertainment)

This documentary tells the story of the late Alexander McQueen, from his humble beginnings as an East-End London boy to his rise to one of the most highly regarded fashion designers of all time, to his suicide in 2010. The film pieces together footage from McQueen’s incredible fashion shows in addition to personal clips, offering a glimpse into his dark genius and chronicling his journey from the beginning to its tragic end. As a voice in the trailer states, “No one discovered Alexander McQueen; McQueen discovered himself.” If you’re a dedicated follower of fashion, this one is not to be missed. (Photo via Lionsgate UK)

That Summer (Out Now)

In the summer of 1972, renowned photographer Peter Beard was tasked with helping Jackie O’s younger sister Lee Radziwill make a film about her childhood on Long Island. He ended up capturing the life of her eccentric cousins Edith and Edie Beale before the cult 1975 documentary Grey Gardens turned them into icons. In this film, that lost footage is reassembled by director Göran Olsson, and we see Edith and Edie as they are about to be evicted from their decrepit East Hampton property. (Photo via IFC Films)

The Gospel According to Andre (Out Now)

With years at W, Women’s Wear Daily, and Vogue under his belt, Andre Leon Talley is one of the most recognized, larger- than-life personalities the fashion industry has ever churned out. In this documentary, we get a look into the journey that shaped this editorial force. The fashion footage alone would be enough to get us to watch. But, from a kid growing up in the segregated Jim Crow South to an actual style icon, Talley’s is a story we cannot wait to hear. (Photo via Magnolia Pictures)

Give us all the ’70s reboots! Directed by music video legend Director X, the 2018 version reimagines the classic 1972 blaxploitation film for the present day (it involves cryptocurrency). Judging by the sexy stars (hi, Trevor Jackson) and the stylish nods to the original flick’s wardrobe (lots of turtlenecks and leather jackets), this one promises to deliver. (Photo via Sony)

Remember how torturous middle school was? Well, at least we can laugh about it now. Truth be told, it’s nothing compared to modern-day, social media-era adolescence, as illustrated in this funny yet heartbreaking story. We get to follow Kayla, a 13-year-old just trying to survive through her last week of eighth grade (there’s a pool party and an amazing neon green bathing suit involved) and make it to high school. If you have a teen or tween in your life, or you just want to feel immensely grateful to be a grown-up, this is the movie to see. Plus you can spot all the tween-age fashion highlights throughout the tale, from chokers to logo tees. (Photo via A24)

Photographer Lauren Greenfield has traveled the globe shooting the rich and famous. In this documentary based on her book of the same name, she examines materialism, celebrity culture, and social status — and why people are obsessed with being wealthy at any cost. We meet all types of characters, from Los Angeles to Dubai, who give first-person accounts of everything from plastic surgery to private jets to designer kids clothes. As Greenfield put it to NPR, “The thing about this project is: It’s not about the rich, it’s really about our aspiration to wealth, and our needing to show it off whether we have it or not.” Expect a lot of luxury fashion moments, including a woman who owns the original Birkin bag in every color. (Photo via Amazon Studios)