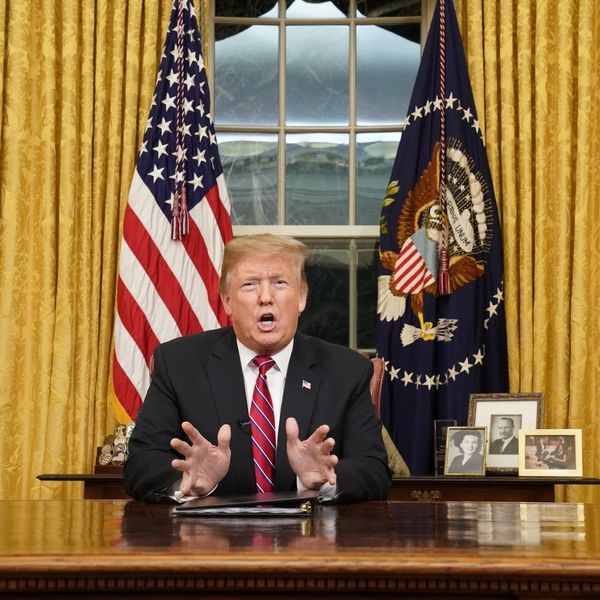 In his Tuesday night Oval Office address, President Trump gave a speech on border security and the government shutdown that skewed the truth from beginning to end. Throughout, the president used fear instead of facts to justify his refusal to budge on his demand for border wall funding, and thus end the partial government shutdown currently affecting hundreds of thousands of federal workers, their families, and government-run programs — which, in turn, affect millions more.

His first assertion, that a humanitarian crisis has arisen because of the “thousands of illegal immigrants trying to enter our country” every day, is misleading. Outside of the “caravan” of asylum seekers that began arriving at the southwestern US border at the very end of 2018, Customs and Border Patrol data reports extremely average 2018 intake numbers that are in keeping with the kinds of numbers CBP has seen at the border every year for the last half-decade.

But this isn’t the only misinformation provided during the address:

In order to solidify his argument of a crisis, the president said that immigration causes a strain on public resources — leaving out the caveat that without legal status, undocumented workers have no access to government programs, regardless of the billions they pay in taxes every year.

A further claim, about the adverse effects of illegal immigration on Black and Latinx Americans’ job prospects and wages, makes the gross implication that undocumented people are somehow the cause of current workplace racial inequities in the US. Racial inequity has a long history in the US and is often perpetuated by unequal access to income and education. Scapegoating immigrants for the country’s legacy of racism is ignorant at very best; taken at face value, it’s xenophobic.

Further, the president’s speech drew a misleading link between southern border crossings and drugs that cited data cherry-picked to fit his personal narrative — a dangerous precedent for policy planning.

“Our southern border is a pipeline for vast quantities of illegal drugs, including meth, heroin, cocaine and fentanyl,” the president declared. “Every week, 300 of our citizens are killed by heroin alone, 90 percent of which floods across from our southern border.”

While the statement that 300 people die every week in the US from heroin overdoses is, in fact, very sadly true, the overwhelming majority of illegal drugs arrive in the US via legal points of entry. A 2018 report from the Drug Enforcement Administration shows that while it’s true that 90 percent of the heroin seized in the US does come from Mexico, the drugs are overwhelmingly entering through legal ports of entry.

It is true that, over the past four decades, drug overdose deaths have only increased in the US, a trend driven largely by the rise of fentanyl. But fentanyl isn’t just coming from Latin America by way of the southern US border; it’s also coming via US mail from China, or through Canada.

And although a DEA drug assessment report confirms some fentanyl arrives to the US from Mexico over the southern border, it also points to the Chinese pills and powders being shipped legally to the US as far more prevalent, lucrative, and deadly. Even the president’s own report on fentanyl from November 2017 correctly states that the fentanyl crisis is being fueled by China, and not Mexico.

The president’s speech also addressed the peril faced by women and children crossing into the US, but with several glaring omissions and lies. He failed to mention the children who have died under the watch of US officials in border detention, the often unsafe detention of thousands more, or the ongoing human rights violations taking place at the border under his administration — not least of which is the persistent denial of individuals’ right to claim asylum. Instead, Trump made the assertion that the undocumented children entering the US “are used as human pawns by vicious coyotes and ruthless gangs,” when border documentation verifies that they are almost exclusively arriving with family members.

At the end of his address, President Trump circled back to the argument that the government shutdown is not his fault, and that he believes a newly-drafted North American trade deal will eventually pay for the wall he’s so desperate to see built. It won’t: The USMCA hasn’t even been passed in Congress yet, and trade deals generally don’t allocate specific funds to programs in the way the president claims.

In the end, the president called out Democrats as “those who refuse to compromise on border security.” But the facts at his very disposal — facts that he’s either selectively consulting, or ignoring all together — show that Trump is the only person who’s refusing to compromise.