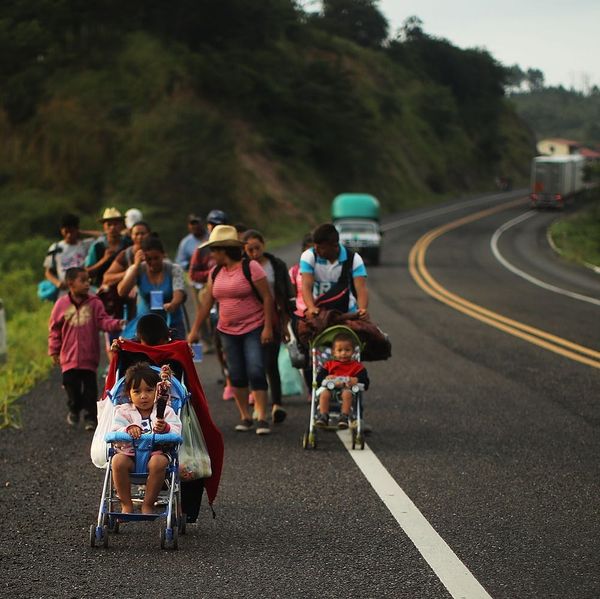 After weeks of stirring racist conspiracy theories about a caravan of Central American asylum-seekers heading to the United States, the Trump administration has just approved the use of lethal force by the military at the US-Mexico border.

The Military Times reports that on Tuesday evening, White House Chief of Staff John Kelly signed a memo that will allow members of the US military stationed at the Southern border to exercise “a show or use of force (including lethal force, where necessary), crowd control, temporary detention, and cursory search.”

This development, which could vastly increase the risks to the individuals within the caravan, comes just days ahead of Thanksgiving — a holiday that’s ostensibly premised on welcoming outsiders who are persecuted abroad.

The fable of Thanksgiving that is popularly told to school kids (and often goes unchallenged by adults who ought to know better) is that the Pilgrim fled religious discrimination in England, and were met with open arms by the Indigenous people who already lived in what is now the US. This popular mythology obscures the genocidal impact of European settlement on Native American populations.

The dark and unsettling true history whitewashed by the Thanksgiving story has heartbreaking parallels in the Trump administration’s response to the latest cohort of Central American immigrants to the US. In fact, the asylum-seekers currently fleeing home to come to the US have been forced to uproot themselves and take a perilous journey largely because of the aftershocks of US foreign policy in Central America. Arguably most devastating was the Reagan administration‘s funding of right-wing military governments in Central American civil wars, which set off a chain of human rights atrocities that have necessitated waves of evacuation over a course of decades.

We helped secure safe passage for these LGBTQ+ migrants to Tijuana and are supporting their asylum claims.

Please watch and share, to see who's actually in the migrant caravan. pic.twitter.com/Og5xOSVGE7

While the Trump administration continues the regrettable US tradition of imperiling the lives of vulnerable Central Americans seeking refuge, myriad pro-asylum activists have been raising funds and supplies to assist asylum-seekers as much as possible when they arrive. RAICES, the non-profit that raised hundreds of thousands of dollars to bail out ICE detainees over the summer, is raising money to bail out members of the caravan who are already being detained. Activists in Chicago have also been collecting supplies including diapers and clothing that are set to be delivered to asylum-seekers.

In the face of new threats against vulnerable immigrants, people are stepping up to help. For that, at least, we can be thankful.