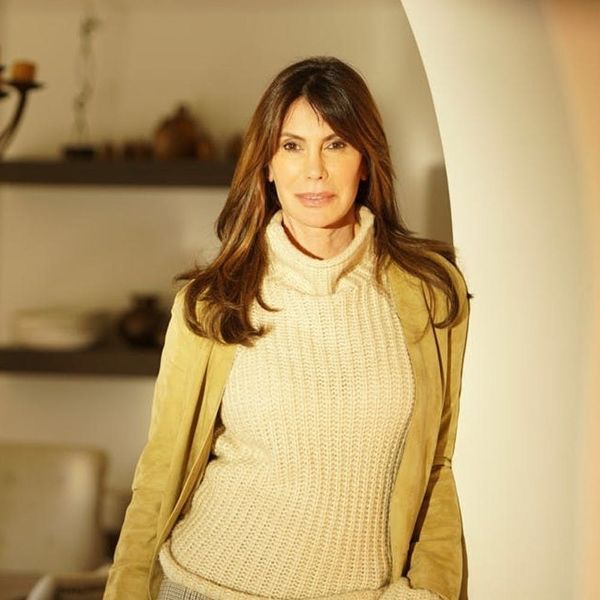 For 14 years, Lizanne Falsetto lived the ultimate fashion dream. Shortly before graduating from high school, Falsetto signed with her first modeling agency. She said a gracious “no thanks!” to the basketball scholarship she’d previously earned and instead hopped a plane to Tokyo — a journey that would kick off more than a decade of international travel as she walked runways and booked print shoots for designers like Yves Saint Laurent, Donna Karan, and Armani. Sounds pretty fabulous, doesn’t it? Years later, Falsetto reflects on the experience positively, as “the best education I could ever ask for,” but there was one specific element of her modeling career that sounds especially unglamorous: airport food.

“Back in the day in the airports, they had hamburgers and hot dogs,” Falsetto tells us with a laugh. “It was like a golf course.”

The young model learned early about the importance of traveling with an apple or banana, and she had her first taste of a health bar in Tokyo, where she says vendors sold nutrition cookies that could be split into blocks and eaten easily on the go. In light of her experience with nonstop traveling — and a love for food born out of many hours spent cooking with her grandmother for their “big Italian family” as a kid — Falsetto describes the Japanese nutrition bar as a kind of revelation. This simple snack would set her down a new path to fill a gap that she’d discovered in the food and wellness market because of her modeling experience.

“I learned about nutrition because of jet lag,” Falsetto explains. “I would be so tired between traveling from Tokyo to Paris in three days and having to come back that when I didn’t hydrate and I didn’t eat right, I was fatigued — and I didn’t look good! That’s when I really started learning more about herbs and vitamins.”

Contrary to the common stereotype of fashion models who are interested exclusively in cutting calories and being thin, Falsetto hungered (get it?) for information about how she could use food to make her feel better. She explored Asian food cultures extensively over the course of her travels in the ’80s and ’90s, paying special attention to the use of ingredients like ginseng and ginkgo biloba. At the age of 19, she put herself on a gluten-free diet when she had a hunch that gluten was making her sick — long before “going G-free” was a thing.

Fully educated and more convinced than ever that her fellow models needed to be able to fuel themselves more effectively with food, Falsetto returned to an old comfort zone: the kitchen. “I used my grandma’s recipe,” she shares. “My grandma made the best peanut butter cookies and brownies you would ever have. I started pulling out the sugar from her recipes and adding protein and fiber. I started playing with it! I would cut them up, and I would carry them to the modeling gigs, and I’d hand them out to the models. Everybody was like, ‘This is so good!'”

Falsetto knew she was on to something — and her taste testers agreed. People began paying $2 each for one of her high-protein, low-sugar bars. Soon after, Falsetto left her modeling career and moved to Los Angeles, where she worked to scale up her baking operation to manufacture larger quantities. Her operation grew into thinkThin, a brand that many of us are familiar with today. According to Falsetto, thinkThin bars were the only nutrition bars in the ’90s that were explicitly gluten-free and formulated with the maximum amount of protein that the human body can absorb. They were also sugar-free.

“I always used to say that you should save your sugar for your wine,” Falsetto jokes.

After years of working as a pioneer in the wellness space — Falsetto notes that she was part of some of the earliest Whole Foods expansion meetings — the thinkThin founder sold the company in 2016 for more than $200 million. She remains passionate about body positivity and eating for wellness, making major adjustments to her own diet as she’s aged so that she’s no longer sticking to the low-carb, high-protein regimen that defined her life and brand for so long.

“They say the new skinny is strong, and I wanted to be strong,” Falsetto says of her evolving routine.

In addition to the unique perspective on wellness, body positivity, and the importance of proper nutrition she gained from her time as a model, Falsetto also advocates for maintaining a particular mindset. Though she admits to taking some heat over the years for a company name that has been said to add pressure to young girls to be thinner, Falsetto reinforces the importance of thinking — thinking about food, thinking about health, and thinking about your own beauty and value.

“I believe that you’re beautiful at any size,” Falsetto says. “But that really comes from the mental clarity that you have within yourself — how you believe, how you perceive yourself, and how you look at yourself in the morning and say, ‘I love you! You look good today!'”

How do you think wellness and body positivity relates to today’s modeling industry? Tweet us @BritandCo!