This Is Us Season 1, Episode 14 Recap: I Call Marriage 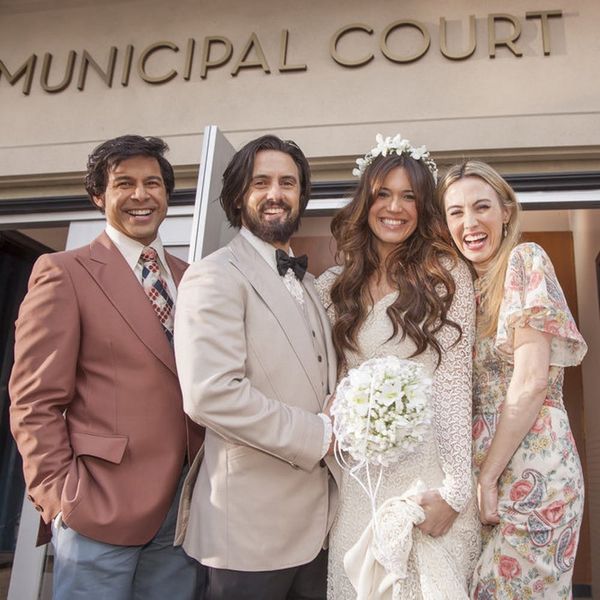 At this point, I’m pretty sure I owe This Is Us my therapy bill. Actually, forget the bill. This show owes ME therapy, because each week is a new emotional rollercoaster that manages to gut punch me even if I don’t think it will. Although, I’ll admit that knowing what tonight’s episode focused on, I was prepared for Feelings with a capital F. “I Call Marriage” took us back to the day that Jack and Rebecca got married. In present day, we got to see Kate, Kevin and Randall grapple with their own feelings of love, in different ways.

A joyous Jack and Rebecca start off the episode, having just come from getting hitched. The most important thing to take away from this flashback? JACK HAS A BEARD. Seriously, the evolving facial hair of Milo Ventimiglia in this show may just be the best thing ever. Miguel gives them a rousing and adorable speech at their reception, and then we flash forward to some years later. As with any relationship, the fire has dwindled a little, but that’s okay, because Jack and Rebecca still are OTP. But we do learn over dinner that Miguel and his wife Shelly are getting a divorce. Jack’s upset and Rebecca’s shaken, and we’re finally getting some insight into Miguel and how he might have fit into Rebecca’s life after Jack’s death. Speaking of that, these flashbacks after the wedding don’t have a time period, but we’ll assume it’s late 80’s given that Jack’s mustache is not a beard, but a goatee. Either way, from the glimpse we get of young Kate, it seems the kids are visibly older, so I half wonder if we’re closer to the time of Jack’s death. In which case, these flashbacks just HURT. (Also, Jack, stop foreshadowing your death with the line “you stay together until you die, period.” It’s not nice.)

Jack goes to find Miguel, confronting him about his divorce. Miguel tells him nothing bad happened… him and Shelly just drifted and stopped noticing each other. Meanwhile, Rebecca gets a talk after singing at the club. Ben wants her to go on tour, but Rebecca’s unsure if she can do that to Jack and her family. When she comes home, she finds Jack dressed up. He wants to take her out, and Rebecca’s confused, but you don’t say no to Jack Pearson. He blindfolds her and drives her to their first apartment, which he’s apparently rented out and lit with candles and lights and blankets. IN CASE YOU ALL WERE WONDERING WHERE KEVIN GOT HIS ROMANTIC GRAND GESTURES FROM, LOOK AT THE CASE OF ONE MR. JACK PEARSON, HUSBAND EXTRAORDINAIRE. (Sorry. Jack makes me emotional. Also, the soap dish — formerly broken due to shower sex — was fixed.)

Jack and Rebecca end the night drinking champagne in the bathroom and cuddling while Jack brings out their vows as a last surprise. And then… Rebecca tells him she wants to go on tour after all.

Kate’s still trying to make her weight loss immersion camp program work. But things get complicated when Toby shows up to surprise her. At first, Kate is thrilled and happy to see her fiancé. But when Toby talks about getting them a room and going into town, Kate gets a little wary. After all, she’s got her routines here. Toby’s already feeling a little meh, and to make things worse, he meets Duke. Toby decides to get himself a day pass to her classes, light up sneakers and all, but Kate’s not having it because he’s clearly invading her space. They argue afterwards about Toby’s presence at camp, because Kate is angry that he’s not taking it seriously and Toby’s angry that she left him alone in New York after his surgery. He gives her his last surprise — his grandmother’s ring — and then we see Kate on the elliptical trying to work off her frustration and feelings. Duke joins her, and has a really jerky conversation about how he’s sure she’s gonna end up in his cabin soon, and… yeah. Ugh. Next!

Kevin “Grand Gestures” Pearson starts his rekindling of love with Sophie by commandeering the booth at the diner where they sat together in the 8th grade and had conversations about their dreams. He also orders her lava fries. (LAVA FRIES FTW.) Sophie is NOT happy about Kevin waltzing back into her life like this, but everyone loves lava fries, so…needless to say, she stays. Kevin tries to talk to Sophie about what she’s doing with her life, because he never stopped thinking about her — she’s apparently a nurse manager now and “pretty badass” but when Kevin hits a chord, she gets up and bolts. They end up on the subway (in a stalled car, no less) arguing about their relationship. And again, we don’t get much, because This Is Us intends to tease big things about its characters just to toy with our emotions. But we do know now that Kevin cheated on her and that’s why their marriage was ruined. Oy.

Kevin makes Sophie talk to her, though, because he knows her too darn well. (So well he created a fake Facebook profile JUST to keep up on her life…) She tells him about her life since the divorce: she moved back in with her parents, she tried to date, and she even married again, even though it didn’t work out. Kevin tells her that aside from the first day she walked into his 4th grade class wearing overalls, the day she decided to marry him was the best day of his life. And he wants her to give him another chance. Spoiler alert: she totally comes to the diner the next morning.

We are loving these two. RETWEET if you are Team Kevin and Sophie! #ThisIsUs pic.twitter.com/eis3glSwAR

Randall gets woken up by a nightmare about William dying, but he’s really woken up by his daughter needing his help. Him and Beth find out that their their oldest daughter Tess is way up past her bedtime, practicing with William for a chess tournament. Randall’s not doing well, y’all. He’s starting to lose it. He’s snapping at his wife and kids, he’s upset about William, and he can’t even handle talking to the hospice nurse that comes to the house. He deals with his issues by going to work, but even that’s taking a toll on him, because between his family and emotions, he can’t give his projects the attention they need. He ends up bailing on a client dinner with his co-worker Sanjay once Beth finds out it conflicts with his Tess’s chess tournament, and as a result, his boss takes away the case. And we finally see the stress of everything catching up to Randall as his hand starts shaking with tremors. Yeah, Randall’s definitely NOT okay, and something tells me he’s not gonna say anything.

And now… the weekly “Jack will make you cry” part of the recap….