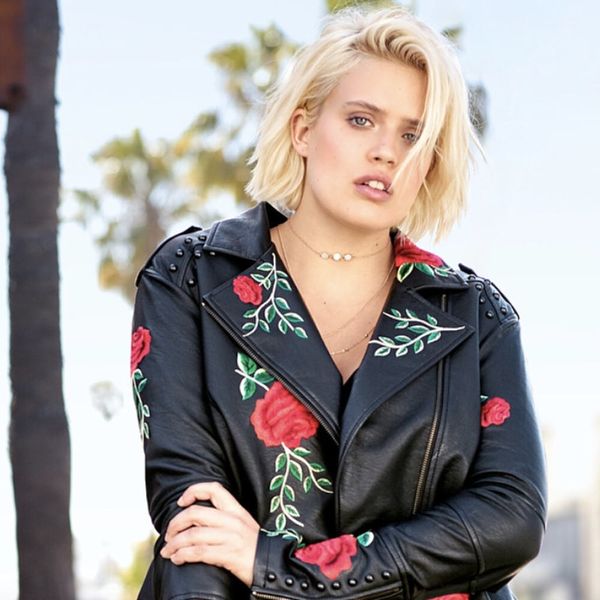 A popular fashion brand’s Instagram photo featuring a model dressed in a sparkly tank top and leggings that say “Badass” on them is at the center of a serious social media storm. “WTF?” and “Because why?” you ask? It’s all over the fact that the model, who’s also rocking a mermaid-themed, millennial pink seashell purse, is a man.

The company, Torrid, is a fashion-forward brand designed for sizes 10 to 30. They’re all about body positivity and creating a positive culture around cool, trendy, plus-sized fashion — which makes it extra weird that some of the brand’s fans would react with such negativity to this photo:

@abearnamedtroy is here to get you through the week like...💋✨ #TheseCurves

“Nothing like catering to an insignificant portion of consumers while isolating the base of your consumers,” said one Instagram commenter after Torrid posted the snap of plus-size male model Troy Solomon dressed head-to-toe in the brand’s clothes. “Umm…pretty weird. Is torrid actually advertising for men to wear torrid? Who’s in charge of this Instagram account? This is a woman’s store,” wrote another.

The super important thing these commenters seem to be forgetting? That it’s basically impossible AF to be body positive while intentionally excluding a huge segment of bodies (i.e. male ones).

“If the body positivity movement is going to be a success, there can’t be any exceptions,” said Solomon in an interview with MIC that addressed the backlash.

“People can’t just be positive towards the bodies that look like theirs or the ones they admire on social media,” he said. “The movement is about accepting and loving everyone of all shapes and sizes, regardless of how they choose to present themselves; it has to be all or nothing. If this experience has shown me anything it’s that even though a lot of people are on the same page, we have a ways to go.”

Solomon’s take on the controversy makes it obvious that the social media upset is way more about gender than it is about size. While Torrid exists because women demanded that cool clothes be made to fit their bodies, some Torrid shoppers aren’t ready to accept the idea that the clothes might also appeal to a wider range of genders and identities.

The brand, however, is: “Whoever wants to buy our clothes instantly becomes our customer (and part of the Torrid family),” a spokesperson told MIC. Their most recent Instagram post seems like an indirect response to the controversy:

What’s awesome is that after the backlash began, commenters who liked the photo began to chime in, making it feel like the positive vibes outnumbered the negative.

“Torrid just became my main place for buying clothes. I’m more than happy to support a company like this,” reads one comment.

“Super happy to see positive messages are greatly outnumbering trolling… because body positivity and gender fluidity in clothing choices is where it’s at :),” wrote another fan of the brand. The photo currently has around 10,000 likes.

Is the idea of gendered “men’s” and “women’s” clothing going out of style? Share your thoughts with us on Twitter!

Corrina Allen
Corrina Allen is a film + television + travel writer from Toronto. Her journalistic goals include a backstage interview with David Byrne, the fictional character she identifies most closely with is John Wick, and her favorite dead person is Vladimir Nabokov. She never, ever Instagrams photos of her food (just her dog).
Body Positive
Diversity
Body Positive