This Alarming Story Might Make You Reconsider That Pregnancy App 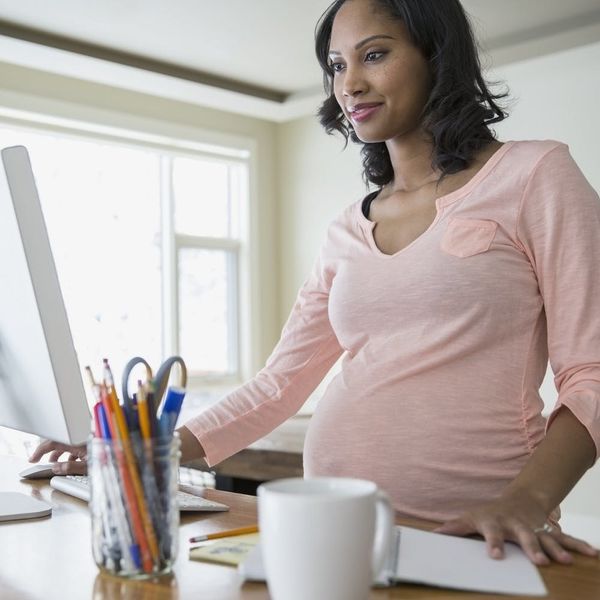 Have you ever wondered exactly what happens to the data you share to the apps you have downloaded on your phone? With everything readily available at your fingertips these days, from shopping to period tracking, what exactly is happening with your data? Writer Kashmir Hill decided to find out while planning her pregnancy, and the creepy AF results should make you think twice about sharing your pregnancy on Facebook — or using any of the many pregnancy tracking apps you might consider downloading.

In an essay for Jezebel, Hill details the months leading up to her getting pregnant, starting with her purchase of prenatal vitamins on Amazon. Four weeks after the purchase, she started getting fetal heartbeat monitor commercials for the first time on Spotify, and she needed to know how much of a coincidence the targeted ad was.

Hill downloaded as many pregnancy-related apps as she could, and used them religiously while tracking what personal information was going out into the marketing world. These apps asked everything from mood and cycle notes to when and if Hill was having sex with her partner. Halfway through her initial tracking, Consumer Reports released information that one of her apps, Glow, had a security breach, allowing anyone who knew her email address access to her personal medical information (they quickly fixed the problem).

Once she was successfully pregnant, Hill’s data was more widely shared by the apps she was using, including the ubiquitous What to Expect app. Using a data tracker called ReCon to monitor how her personal info was being used and potentially shared, Hill found that when using each of the pregnancy apps, every single bit of data she’d entered was being shared. Everything.

“The number of security and privacy issues that we discovered in just this cursory look at the few most popular apps could lead one to a pretty grim view of women’s health apps,” wrote Cooper Quintin from the Electronic Frontier Foundation (who helped Hill use her tracking tool).

Further investigation found that the parent companies of most apps make money by selling users’ personal information to advertisers, their primary way to generate income. “As soon as I signed up for the app [What to Expect], it passed my email address along to a bunch of other companies,” Hill writes, “including Pottery Barn Kids and Huggies, who immediately began spamming my inbox.”

And the apps didn’t just sell personal info to advertisers. Facebook, Google, and Adobe all got Hill’s personal info, which was all tied into her iPhone’s IMEI (personal serial number), enabling tracking of her shopping habits, movement, and more.

Apps, of course, aren’t the only way that companies might figure out you’re pregnant. Anyone who’s noticed targeted ads for engagement rings suspiciously soon after posting online about a significant other knows full well that sites like Facebook are also where privacy goes to die.

While she admits that the apps were ultimately helpful in helping her track her fertility and pregnancy, the data sharing Hill uncovered between her phone and social media is scary. Should she become pregnant again, Hill admits that she’ll work at avoiding all of the digital interference, quipping, “The only privacy invasion they’ll be subject to in utero will be the ultrasound.”

Do you use period tracking or pregnancy apps? Tell us @BritandCo!

Kat Armstrong
Kat has been a writer, social media maven and mom for longer than she's willing to admit. She's also spent time in front of and behind the camera, interviewing celebs, politicians and acting as a producer for fashion and artistic photography shoots. When she isn't writing for various orgs and publications, she's hanging with her kids, husband and French Bulldog, Peter, in Toronto, Canada.
Apps
Womens Health
Apps Pregnancy
More From Womens Health