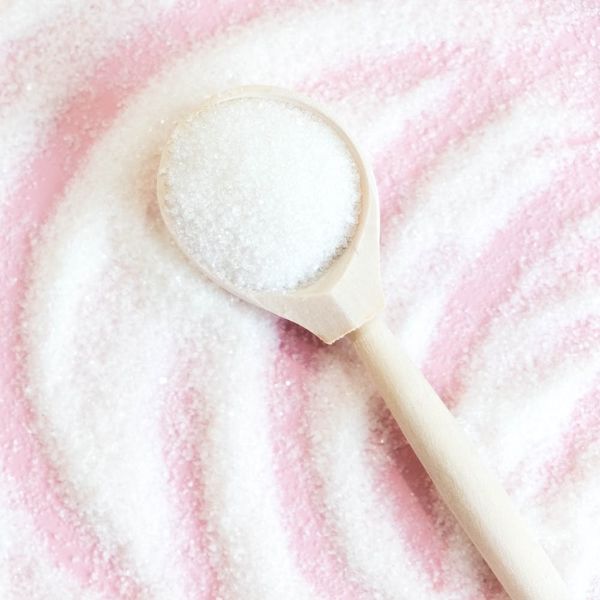 If you’re trying to make over your eating regimen and work toward a healthier lineup of food and drink, it should come as no surprise that sugar is a fickle, fickle friend. We love indulging in an apple crumble or basically anythingdulche de leche, but those treats don’t always love us back — and the fact that they’re loaded up with added sugars means that nutrition pros aren’t too excited about the idea of us eating ’em regularly. According to Stephanie Perruzza, in-house registered dietician at KIND Snacks, it’s added sugars — not the natural ones found in fruit and dairy — that we need to be most concerned with. We got the lowdown from Perruzza about added sugars, and got some tips on how to eat less of them.

“It’s really about the vessel the sugar is consumed in,” Perruzza says of the difference between natural and added sugars. While these two categories are largely the same biochemically, natural sugars come with fiber, calcium, and other nutrients, while food products with tons of added sugar often lack any redeeming nutritional qualities. “You tend to get a better health package with a natural sugar.”

To draw attention to our national problem with added sugar, KIND dumped 45 thousand pounds of sugar — that’s how much added sugar children in the US are eating every five minutes (!) — into Times Square last month. According to a recent poll by the snack company, many parents don’t understand the differences between natural and added sugars. Enter Fruit Bites, a new naturally sweetened take on fruit snacks that KIND hopes will set more kids on a path toward healthier treats.

It’s not just well-known “sweet treats” that include gratuitous sugar, though. Added sweeteners lurk beneath the surface of plenty of other foods, Perruzza says. Condiments (like salad dressing, barbecue sauce, and ketchup), pasta sauces, pre-packaged oatmeal (especially those flavored with brown sugar or maple), and products labeled as fat-free or low-fat are just a few of the sneakier food culprits loaded up with the kind of sugars we really don’t need.

Thanks to Perruzza, we’ve pulled together a list of five habits you can work into your shopping and eating routines that will help you cut back on added sugar. Our favorite thing about this approach? It encourages us to toss out the unhealthy sweetness without pretending that we can totally eliminate the yummy flavors we love. Read on for all the details!

1. Swap out sugar-sweetened beverages. According to the USDA’s dietary guidelines for 2015 to 2020 (published in December 2015), beverages other than milk and 100 percent fruit juice account for 47 percent of added sugar intake among the American population. Soft drinks make up the largest portion of this category, but fruit drinks, sport and energy drinks, coffee, tea, and alcoholic beverages also contribute. To cut back on the intake of beverages with added sugar, Perruzza recommends drinking more water and seltzer. If you just have to have that little extra somethin’ somethin’ in terms of flavor, toss in fresh fruit.

2. Read food labels. Perruzza encourages you to pay more attention to ingredient lists before you buy. “Sugar comes in different names like malt syrup, invert sugar, agave nectar, [and] corn syrup,” she says. “Be aware of these on a food’s ingredient list.” Recently, some food companies — KIND being the first — adopted a new label that offers a separate disclosure for added sugars. These labels note how much of the total sugar listed comes from added sugar sources. Look out for information like this at the supermarket.

3. Use fruit as a natural sweetener. Using real fruit and spices to flavor yogurts, beverages, and other oft fruit-sweetened foods is a great alternative to the syrups and jams typically used by manufacturers. Instead of purchasing “fruit on the bottom” yogurt cups, for example, add fresh berries and cinnamon to a serving of plain or Greek yogurt. It may tack on an extra minute or two to your morning routine, but it will pay off in spades for your health. Fruit is just as delicious (if not more!) as the pre-packaged syrups, but it also contains fiber and other nutrients.

4. Take added sugar out of your sight lines. That pretty ceramic sugar bowl may look great sitting in your kitchen next to the coffee pot, but it’s one more thing bringing you face-to-face with unhealthy added sugars. Stash sugar bowls and syrups in the pantry whenever possible. “Out of sight, out of mind!” Perruzza says.

5. Practice moderation. Practicing moderation in many things is key to maintaining a healthy lifestyle, and sugar is no exception. Give yourself permission to indulge in your favorite desserts and sweet treats here and there, but don’t make a habit of doing so after every meal. If you just have to tend to that pesky sweet tooth more often, Perruzza says, consider enjoying fruit, which will take the edge off of your craving without added sugar.

How do you minimize added sugar in your diet? Tweet us @BritandCo!

Alli Hoff Kosik
Alli Hoff Kosik is a freelance writer who is passionate about reading, running, rainbow sprinkles, her lipstick collection, watching embarrassing reality TV, and drinking pink wine. She lives in Brooklyn with her husband and (in her dreams, at least) three golden retriever puppies. Listen to her talk books on The SSR Podcast.
Diet
Health
Diet Healthy Living Sweets
More From Health