The Most Popular Cookbook Recipes We Shared in 2018 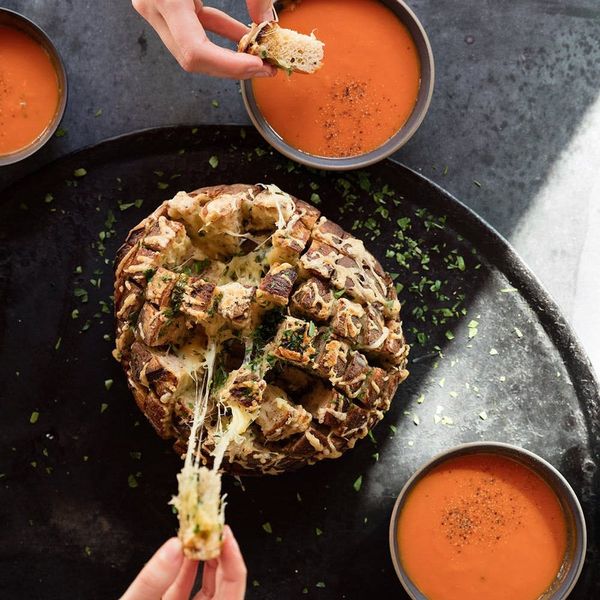 We dirtied many dishes and glossy book pages when testing out this year's cookbooks for our Cookbookmarked series. From a complete slow-cooker guide to Whole30 to Chrissy Teigen's highly anticipated sequel to Cravings, 2018's options made a lasting — and delicious — impression. Since we're all about balance here at Brit + Co, it's only fitting that our most popular Cookbookmarked posts of the last 12 months feature a mix of healthy mains and indulgent desserts. Read on for nine of the best cookbook recipes of the year.
Slow-Cooker Keto Shredded Mexican Chicken: This buttery, tomato-y, well-seasoned shredded chicken makes a versatile base for keto salads, lettuce wraps, cauliflower rice bowls, and more. (via Kristie Sullivan / Victory Belt / Keto Living Day by Day)
Salted Butter Chocolate Chunk Shortbread Cookies: Alison Roman's buttery, salty, and oozing-with-chocolate shortbread cookies took the internet by storm this year, so much so that they became known as "The Cookies." Make a batch of the sugar-dusted slice-and-bake treats for your most deserving friends, and you'll understand why. (via Nicole Perry/Brit + Co / Dining In)
Whole-Loaf Garlic Cheese Bread: Few foods bring people together like bread, especially when said bread is filled with herbed garlic butter and cheese and baked over potatoes. We bow down to Tartine Bakery for developing this recipe and to Leslie Jonath for publishing it in this cookbook. (via Molly De Coudreaux / Feed Your People)
Bulgogi With Cucumber Kimchi Salad: Joanna Gaines couldn't resist using her mom's recipe for brown-sugary bulgogi beef in her first cookbook. Take a warming bite of the flavorful meat on a bed of white rice, topped with spicy cucumber salad to cut through the richness, and it just might remind you of your own home. (via Amy Neunsinger / Magnolia Table)
Chrissy Teigen's Tropical Fruit Salad With Coconut-Lime Dressing: This pineapple, mango, papaya, and lychee fruit salad was the first recipe we tried from Cravings: Hungry for More, and we've wanted to put its sweet coconut milk dressing on just about every piece of fruit we've eaten since. (via Brittany Griffin/Brit + Co / Cravings: Hungry for More)
Broccoli Chicken Ranch Salad: Garlicky, herb-filled twice-baked potatoes are Whole30-compliant but don't taste like it. Shredded chicken and broccoli, plus lots of scallions and ghee, make a dairy-free tater that's both comforting and healthy. (via Michelle Smith / The Whole Smiths Good Food Cookbook)
Instant No-Yeast Naan: Making yeast-free naan at home is simpler than you may think once you employ basic baking ingredients and simple kneading. When you smell it cooking on a hot skillet, you'll be proud you didn't order take-out. (via Asha Shivakumar / Masala & Meatballs)
Funfetti Explosion Birthday Ice Cream Cake: Dini Kodippili's cleverly named Secret-Layer Cakes features beautiful cakes with surprises inside. This funfetti blondie cake, gloriously filled with funfetti cake batter ice cream, could turn even a sugar hater's head. (via Dini Kodippili / Secret-Layer Cakes)
Paleo Cumin Cilantro Cauliflower Rice: Cauliflower rice doesn't always have to play sidekick to a flavorful protein, as demonstrated by Paleo Nom Nom blogger Michelle Tam. When cooked with garlic, onion, cumin, cilantro, and lime, the healthy veggie can take center stage. (via Nicole Perry/Brit + Co / Ready or Not!)

Sara Cagle
Sara is a food and lifestyle freelance writer in Los Angeles. She writes a weekly events column for the Los Angeles Times and loves writing food content for Brit + Co. After all, the English language's most fun adjectives are best applied to delicious foods. In her free time, she's a hip hop dancer, avid moviegoer, and thorough face-mask user.
Best of 2018
Recipes
Best of 2018 Cookbookmarked Recipe Roundup
The Conversation
More From Recipes