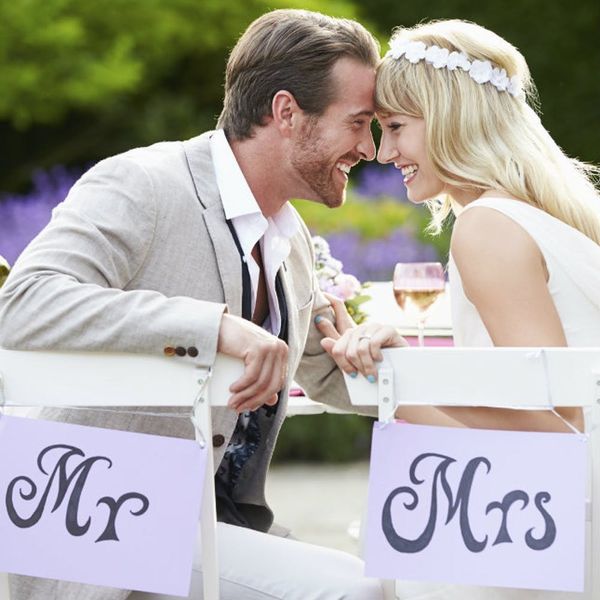 Marriage is a lot of work. Planning the wedding alone is a months-long ordeal. And whether you’re a more traditional bride planning a full-on princess-dress blowout or you’re wearing white jeans and DIY-ing your own minimalist wedding, there are some things every engaged couple needs to do. One of the biggest: deciding whether or not you’ll change your last name.

Maybe it’s actually not that big of a decision for you. You might consider a name-change a given, or you might be thinking “Yeah, there was no way I was ever going to do that.” If you’re just not into it, that’s totally fine — no matter what your future mother-in-law thinks. But if you’re on the fence about it, or looking for some ways to back up the decision you’ve already made to family members who’re pressuring you, here are 10 personal, professional and cultural reasons for why women choose to keep their own last name.

1. It’s trending. According to a 2015 New York Times survey, after a dip in the ’80s and ’90s, the number of women keeping their last name is once again on the rise. Around 20 percent of married women these days choose not to take their husband’s name, and 10 percent combine it with their own using a hyphen. Looking at the number of wedding announcements in the NYT over the same period as the survey, the numbers were even higher: 29.5 percent of brides who appeared in the NYT kept their own name.

2. You consider it a feminist statement. Not changing your last name for marriage became particularly popular in the ’70s, when some state laws still made taking your husband’s name a requirement around things we take for granted now, like voting or opening a bank account. (Seriously, WTF.) So keeping your maiden name was a symbolic gesture in support of the women’s movement, and for some women, it’s still seen as a way to assert independence and make a statement about women’s equality.

3. It could make things confusing for you professionally. If you’re literally making a name for yourself in your industry, you might not want to have to deal with building up a whole new name, and having your work and reputation under the old name completely forgotten. Or maybe you just don’t want to have to add a new Google Alert for your new name. Either way, it’s a big deal.

4. Your partner’s last name is hard to spell or pronounce. Not for you (hopefully). But if your partner-to-be is constantly bemoaning how people can never seem to get his name right, you might be more inclined to avoid the hassle.

5. Your first name sounds weird paired with their surname. Remember in The Wedding Singer, when Drew Barrymore’s character almost became Julia Gulia? Even if you just plain don’t like your partner’s last name, that’s reason enough not to take it.

6. It’s a lot of paperwork. Legally changing your name isn’t something to be taken lightly, if only because you have to jump through so many clerical hoops to do it. (Just ask our own Brit Morin.)

7. Your name is simply a huge part of your personal identity. Your name has been your name your whole life. It only makes sense that you’d feel attached to it. If you just can’t picture yourself going by anything else, then don’t.

8. All the top celebrities are doing it. Lots of married stars opt to keep their own last name. Neither Angelina Jolie nor Jennifer Aniston ever became “Mrs. Pitt,” for example. Zoe Saldana’s husband, Marco, actually took her last name.

9. Your family name “ends” with you. If you’re an only child or come from a family of girls, not keeping your last name would prevent you from passing it down to your kids and continuing it for more generations to come.

10. You’re not planning on having kids. Many women don’t see the point in changing their last name if they’re not planning to have children, because with no kids there won’t be any maternity/paternity name confusion to worry about. Even if you do end up having kids, your kid could always just take both names.

Are you keeping your last name? Tweet @BritandCo to tell us why that was the right move for you.