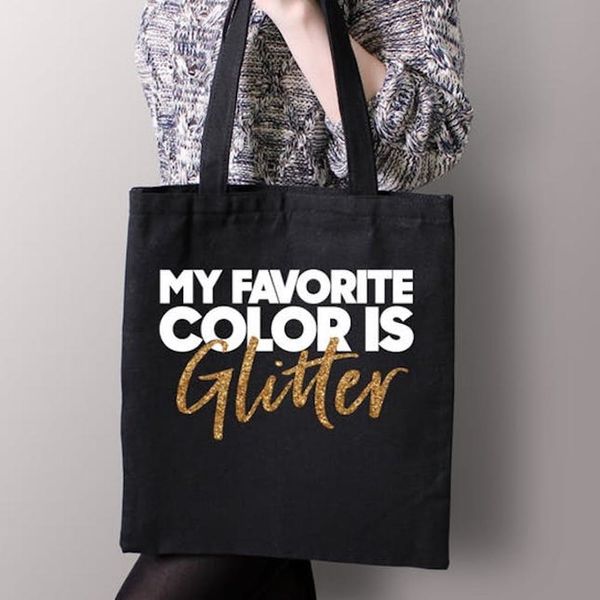 Pepsi and Topshop, you’re not alone. The most recent fashion controversy sweeping the internet has to do with an unfortunate choice of typography on a tote bag being sold by BelleChic.

Two days ago, people started noticing something a little odd about one of BelleChic’s sister brand Quotable Life‘s offerings. While the intended phrase printed on the black tote bag was “My favorite color is glitter,” the font made it look a heck of a lot like “My favorite color is Hitler.” Oops.

People think this bag says, "My favorite color is Hitler," so let's avoid this font at all costs.https://t.co/8j2ENA05mU pic.twitter.com/9Hu9pNNuxA

I read that as
My favorite color is Hitler and got very confused. https://t.co/fopTlWxrQZ

Interestingly enough, the bag has been for sale for over a year without issue, according to BelleChic’s chief marketing officer Matt Molen. He told Allure, “While I realize that most of the social media buzz and commentary has been tongue-in-cheek, the type of abhorrent sentiment conveyed as part of the misinterpretation absolutely does not align with our company values, nor is it something we would ever want to encourage or support.”

Since the controversy broke, BelleChic has been quick to act. They replaced the font for the word “glitter” on their product and updated the images for both the BelleChic and Quotable Life websites.

We are beyond embarrassed about the design of our GLITTER tote bag 🙈 ✨. We replaced it with a new design. Hope you like this one better! pic.twitter.com/1ZXGAOcnGj

The company also tweeted about their faux pas, writing, “We are beyond embarrassed about the design of our GLITTER tote bag. We replaced it with a new design. Hope you like this one better!”

Now you won’t need to worry that everyone is misreading your intentions.

What do you think of Quotable Life’s snafu? Tell us @BritandCo!

Shea Lignitz
Shea can be found in the nearest bookstore or brewery, exploring the great outdoors, or blasting Led Zeppelin. She grew up in the cold and rain of Northern California's redwoods but is currently wandering around Texas.
Bags
Style News
Bags Controversy
More From Style News