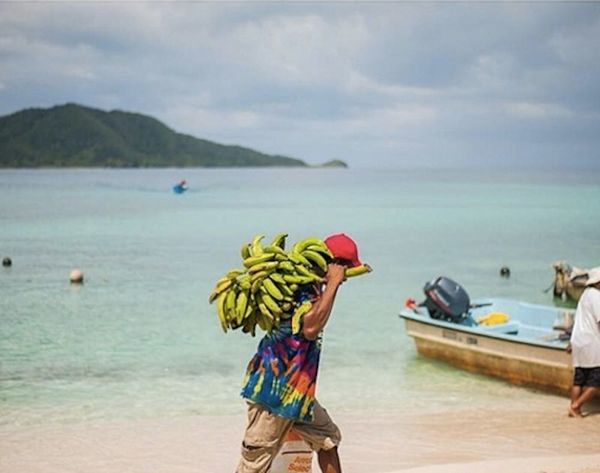 Instagram is one of the best places to scratch the travel itch. You can peer into worlds near and far with just a few swipes! For you today, we have 20 nomadic shutterbugs that don’t seem to ever sit still, moving from place to place and (thankfully for us) dragging their phones and filters along for the ride. Hide your credit cards, because these ‘grammers are going to make you want to buy a ’round-the-world ticket ASAP.

1. Mosey: Mosey is an app that helps you discover and share the best places in any city, and their Instagram account is a must-follow. They feature images from in-the-know locals regularly, so it’s like a little window into each locale featured, from Scotland to Hong Kong. This shot is from Cappadocia in Turkey. (via eeeekim and wemosey)

2. Cynthia D: ‘Grammer Cynthia D describers herself as a “flâneur,” which means idler. This lady likes to move though. Her photo adventures range from capturing London street style to navigating the Amazon River and Icelandic fjords. Our favorite snaps so far are from her snorkeling trip near Christmas Island, which included the stalking of adorable Australian marsupials. Oh, and then there was the time she was in Gibraltar, hanging with primates. (via jetsetcd)

3. Kristen Alana: We’re pretty sure photographer Kristen Alana spends more time in beautiful places than you do. It’s just a fact of life. Last month, she was hiking in the Cascades. Right now, she’s visiting temples in Bali. (via kristenalana)

4. Brian DiFeo: Whether riding around New York City’s West Village in his vintage truck or jet-setting to Abu Dhabi, Brian DiFeo is living The Life. (via brindif)

5. Megan Gilger: That’s no ocean next to those dunes — it’s Lake Michigan. Megan Gilger is the Traverse City blogger behind The Fresh Exchange. Like a one-woman PR rep for the Great Lakes, she snaps the most stunning views of Midwestern lakeside life. (via megangilger)

6. The American Edit: Not gonna lie. We crush hard on Rita Mehta. Her blog The American Edit is a definitive guide to American-made everything. Her mission to discover new makers and brands takes her all around the U.S. Her recent travels to Europe make us want to pack ourselves in her suitcase. Take us with you, Rita! (via theamericanedit)

7. Jennifer Picard: Vancouver photographer Jennifer Picard is upping the road trip game with this gorgeous pastoral picture from the Oregon coast. Her entire feed is flush with amazing mountain hikes and ocean views. (via jennifertakesphotos)

8. Winning Me Over: From Russian cityscapes to gelato in Portland, this account asks people to share how their city is winning them over. Cologne’s pastel-painted buildings are certainly winning us over. (via kenziestroesser and winningmeover)

9. Cole Rise: If he hasn’t won all of them already, this professional escape artist deserves an award for this picture of the Wailua Falls in Hawaii. Judging from his ‘grams, he’d probably have to accept the award from Dubai or Tokyo or Oslo. (via colerise)

10. Megan Kathleen: On any given day, free-spirited yogi and globetrotter Megan Kathleen could easily be found doing back-bends on a still mountain lake, befriending locals in Honduras or lusting after VW buses on the way to the next music festival. (via omegankathleen)

11. Sarah Norris: Based in Southern California, this ‘grammer is a favorite of ours for Southwest road trip inspiration. One day she’s camping solo in Texas, the next she’s on the open desert road in Arizona and the next she’s sipping craft cocktails in San Diego. (via sarahknorris)

12. Gary Arndt: Gary Arndt has thousands of followers for good reason. He’s been to all seven continents (yup, Antarctica, too!) and over 100 countries, click-click-clicking his shutter all the way. (via everythingeverywhere)

13. Mali Mish: If you’ve ever thought about living a vagabond life, you might just commit to doing it when you start following this family of five. That’s right, this husband and wife team travel around the country with their three wee ones, schooling them along the way and then taking them to live out their lessons in real life. (via malimish_airstream)

14. Nicole Warne: From Croatia to New Zealand, you’d have to scour the globe to find a more stylish frequent flyer than Nicole Warne. (via garypeppergirl)

15. Poler Outdoor Stuff: This bi-coastal American outfitter is all about the camp vibes. Get a look at their handle, and you’ll be itching to pitch one of their tents next weekend. (via polerstuff)

16. The Blonde Gypsy: This blonde is definitely having more fun. (via theblondegypsy)

17. Mustafa Seven: Istanbul-based artist has an incredibly unique eye. His shots around his own neighborhood are just as stunning as his work around the world. (via mustafaseven)

18. Vaggelis Fragkakis: This Greek photographer has never met a white facade he didn’t like. We love that even when he’s in the most mind-blowing places on Earth, he finds the beauty in simplicity. (via vagfrag)

19. Murad Osmann: Moscow’s cutest couple roam the globe. The Internet applauds. This photographer shoots his destination snaps from his point of view with his girlfriend and her glorious head of hair leading him by the hand. Check out their hashtag #followmeto, as well. (via muradosmann)

20. Kevin Russ: The crazy thing about photographer Kevin Russ is that he only uses his iPhone for these Instagram shots. We love his North American wildlife collection so much that we actually bought a few of his prints last year. And looks like this fox is itching for a trip as much as we are. (via kevinruss)

Well, where are you going first? Let us know in the comments!