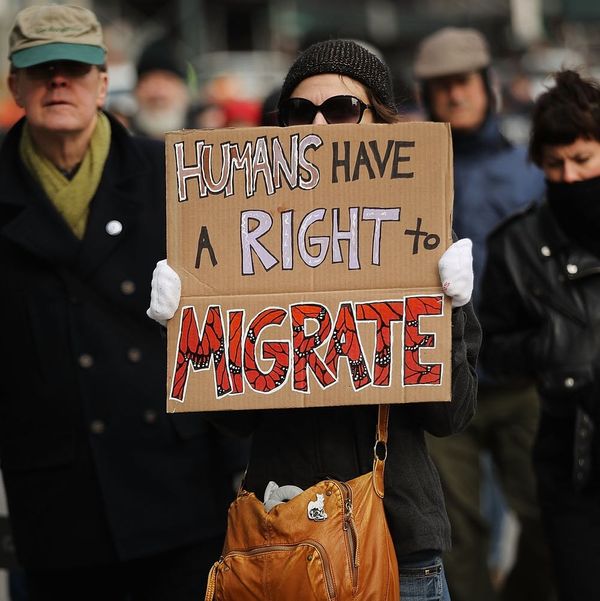 Wanna start a small business but can’t afford to pay your employees minimum wage? No problemo! Just handpick the immigrant of your choice and give ’em a call! They’ll live in your basement — you’re not using it! — and will be grateful for the $5 an hour you pay them.

The scenario described above is obviously completely illegal, but if it were up to two extremely misguided professors, it wouldn’t be. In an essay published Wednesday on Politico titled “Sponsor an Immigrant Yourself,” Professor Eric Posner of the University of Chicago Law School and Professor Glen Weyl of Yale University explain that under the current immigration system, it’s the corporations that hire immigrants and the immigrants themselves who are reaping all economic benefit. But what about your everyday American? Where is her immigration windfall?

The solution to this highly questionable injustice, say Posner and Weyl, is to give individual Americans the chance to personally select and employ an immigrant of their choice. Here’s how they lay it out:

“Imagine a woman named Mary Turner, who lives in Wheeling, West Virginia. She was recently laid off from a chicken-processing plant and makes ends meet by walking and taking care of her neighbors’ pets. Mary could expand her little business by hiring some workers, but no one in the area would accept a wage she can afford. Mary goes online—to a new kind of international gig economy website, a Fiverr for immigrants—and applies to sponsor a migrant. She enters information about what she needs: someone with rudimentary English skills, no criminal record and an affection for animals. She offers a room in her basement, meals and $5 an hour. (Sponsors under this program would be exempt from paying minimum wage.)”

But wouldn’t immigrants get exploited, you ask? They can leave any time they want, say Posner and Weyl. And won’t Americans lose jobs to these new immigrants? Maybe at first, but those same Americans will soon learn how to use the system to their advantage — by hiring a basement full of $5 an hour immigrants!

We’re not sure how this is all sounding to you, but it’s pretty hard to ignore the marked parallels to indentured servitude.

And we weren’t the only ones to notice:

I have a name for this app how about Slaver-E

Like, the way you talk about people who’s situation was begat as a direct result of US policy, you act as though this mass human suffering is some sort of lucrative business opportunity Americans have to take advantage of. As if we haven’t exploited these people enough.

The fact that anyone would try to promote an idea by referring to it as “a Fiverr for immigrants” shows just how out of touch these guys are. The original title of the piece was actually “What if you could get your own immigrant?” It was later changed, a fact that co-author Glen Weyl felt was important to point out, while at the same time standing by his controversial stance:

For those following our piece @politico today (https://t.co/pSUVDaoYEA … … …) or the reaction, please understand we had no influence on the original title and I regret it, along with elements of the tone. Thank you to @suellentrop for updating title. I stand by the argument.

The Politico essay is just one idea pulled from a soon-to-be-released book by the co-authors titled Radical Markets. It’s packed with jaw-dropping ways to rethink the way the nation’s political and economic systems work.

In the book, Posner and Weyl “show how the principle of one person, one vote inhibits democracy, suggesting instead an ingenious way for voters to effectively influence the issues that matter most to them.” Fantastic! They also present a new business model in which Facebook pays users for content. Genius!

Happy Valentine's day to everyone except Eric Posner & Glen Weyl

What do you think of the essay? Tell us @BritandCo!

Lia Grainger
Lia Grainger is a freelance journalist and reluctant nomad who divides her time between Canada and Spain, weather dependent. She's written for The Atlantic, Reader's Digest, the Toronto Star and other print and online publications, and her work appears in dozens of languages around the world.
Controversy
Current Events
Controversy Immigration
More From Current Events