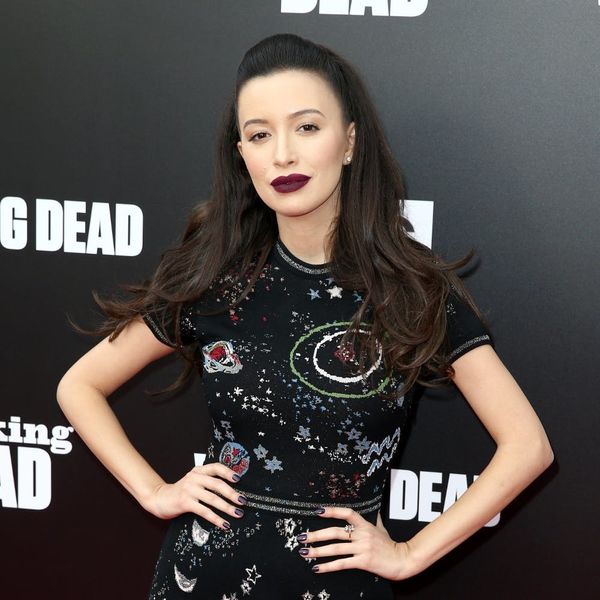 Another day, another woman being shamed for doing something that’s completely natural. The Walking Dead’s Christian Serratos is fighting back after being shamed for sharing a pic of herself breastfeeding her baby while working. And while we can’t believe this is something that women are *still* dealing with, Serratos’ response is definitely worthy of applause.

Two days ago, the 26-year-old mama posted a pic of herself breastfeeding her little one (whose name and sex have been kept private by the doting parents). The post, which Serratos captioned with a thank you to Jewels by Durrani for her custom necklace that celebrates her little family, is a beautiful image of a mother and child together — but some folks couldn’t keep their snark to themselves.

Thank you for our custom D.C.W necklaces that represent us and OUR DAUGHTER @jewelsbydurrani 😘

Commenters trolled the first-time mom in pretty much every way possible — from claiming that the pic was “disgusting” to accusing Serratos of simply wanting to show off her body (ugh!). It was a pretty fierce example of what many (!) other women have experienced.

Serratos wasn’t having ANY of it, though.

This is my body and my page. So I will post what I want, when I want. Those who disapprove can suck my left tit. 😘 #workingmom #chill

Posting a second picture, again where she’s breastfeeding her little one, this time while also doing her makeup in a Walking Dead trailer, she added an on-point caption, writing, “This is my body and my page. So I will post what I want, when I want. Those who disapprove can suck my left tit. 😘 #workingmom #chill.”

What do you think about the fact that women are *still* being shamed for breastfeeding pics? Let us know @BritandCo!