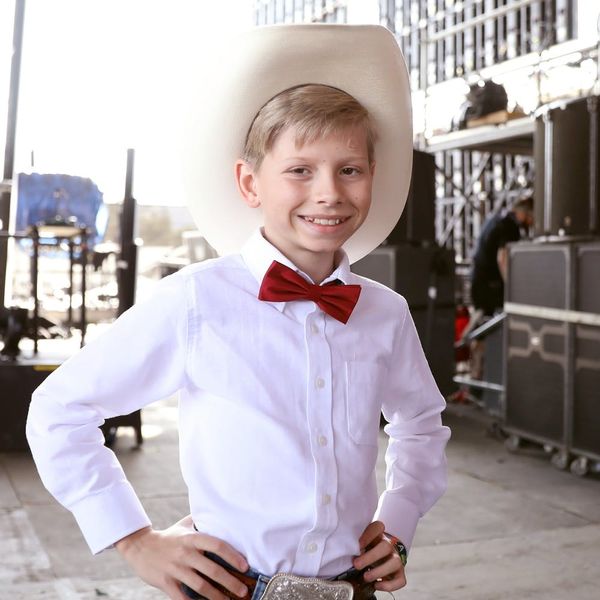 Coachella 2018 is shaping up to be a memorable one indeed! As if Twitter didn’t have enough to freak over after Beyoncé’s EPIC Destiny’s Child reunion, this year’s fest has the internet in a tizzy over ANOTHER very special and very unexpected star: the one and only Walmart Yodeling Boy!

The 11-year-old singer, whose real name is Mason Ramsey, became famous overnight after a video of him yodeling Hank Williams’ “Lovesick Blues” at his local Walmart in Harrisburg, Illinois started attracting millions of views. He’s since had quite the week: In addition to appearing on Ellen, he was invited to play a major concert in said Walmart’s parking lot plus hit the stage at the Grand Ole’ Opry, he took Coachella by storm Friday, joining Chicago DJ Whethan on stage.

The pair posed in front of a massive crowd with Whethan joking that the pint-sized cowboy was “supposed to be playing his school talent show but took him to Coachella instead.” Ramsey, meanwhile, showed off his signature Western threads and belted out a few lines of the song that made him famous to massive applause that was almost deafening.

As Funny or Die‘s Eric Turtle revealed on Twitter, he played a major role in making the surprise appearance a reality. “After the yodel kid followed me, I DMed him to try and get him to come out as Whethans guest at Coachella,” he wrote. “And it happened. You’re welcome everyone. I love you Mason and I love the internet.”

While there, the lil’ yodeler also made another A-list fan: Justin Bieber! The Biebs, who actually shared his wishes for a live Ramsey set earlier in the week, made sure to meet up with the viral star backstage, where the two reportedly chatted about California and even snapped a couple of selfies together. Dreams really do come true!

Are you a fan of the Walmart Yodeling Boy? Tweet us @BritandCo.

Barbara Pavone
Barbara Pavone is a pop culture-obsessed writer based in beautiful (but ridiculously cold) Montreal, Canada. When she's not working, she's sipping on a Pimm's Cup and daydreaming about her celebrity hero, Saint West.
Music
Music
Music
More From Music