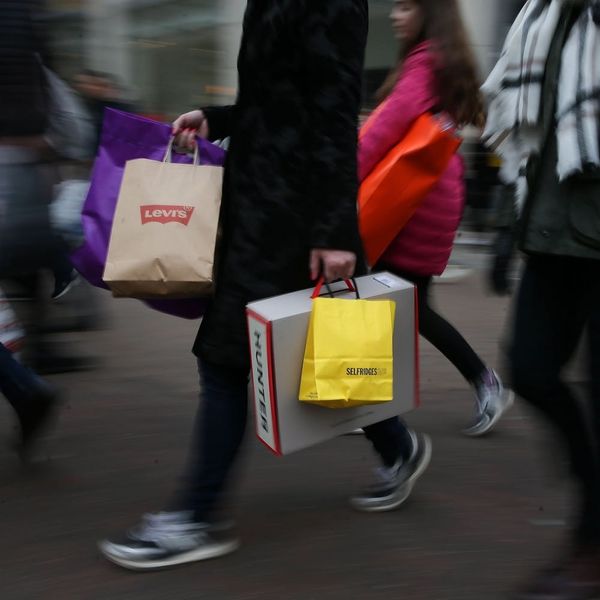 Black Friday, the craziest shopping day of the year, is finally upon us. Aside from doorbusters and blowout sales, there’s one more thing you can count on if you dare to venture out into the shopping arena today: mile-long lines. But some enterprising store employees are trying to sell their uniforms to those desperate to skip to the front.

I’m selling this Walmart vest for $100. Use it to skip the line during Black Friday. You can even walk in, grab what you want, and walk out🤷🏾‍♂️. pic.twitter.com/Q0UyDHUeU0

It all started with a viral tweet from one Twitter user named @OverlyLiked, who sent out a message to the world saying he was selling a Walmart vest for $100 to anyone who wanted to go to the big box retailer, “walk in, grab what you want, and walk out.” (Ahem, after paying, of course.)

While his tweet was meant as a joke (he followed up by saying he doesn’t even own a Walmart vest), it has since been retweeted over 31,000 times and liked over 79,000 times.

Going out for Black Friday?

Pick up this Walmart vest for $30!

But for folks who actually DO have Walmart vests, the seed was already planted.

Now I know them Walmart vest seemed like a good deal ,but I got these Best Buy joints going for $110 walk right in , skip the line , and take whatever you want !! pic.twitter.com/eVzML3RYbQ

And it was only a matter of time before employees (or former employees?) of other retailers began to jump on the uniform-selling train.

When you bought a $100 dollar Walmart vest to finesse Black Friday and the manager starts telling you to help unload in the back https://t.co/E9KaIvlKYm

While this certainly is an interesting way to *maybe* get ahead of the lines, there is one downside if you get caught: You might be put to work.

Kimberly Wang
Kimberly Wang writes about all things pop culture, tech, style, and beauty. She's a Bay Area transplant and has an MFA in Creative Writing from Columbia University. On a sunny New York day, you can find her hanging out with her mini schnauzer Isabelle Jellybean on a blanket in Central Park.
Black Friday
Style News
Black Friday Shopping twitter