Your Travel Guide to the Nation’s Capital: 72 Hours in Washington, DC 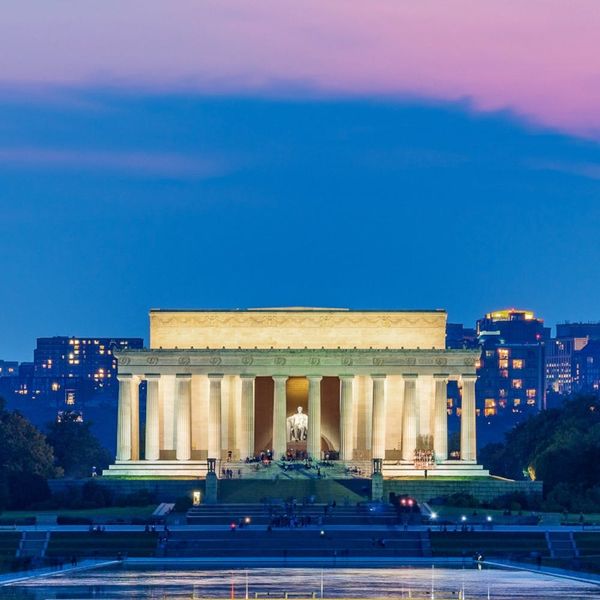 These may be times of drawing political lines in the sand, but if there’s one thing everyone can agree on, it’s the charms of our nation’s capital city itself. There’s much more to the District of Columbia than the federal government: Its flourishing nightlife, innovative culinary scene, and inspiring museums are waiting to be explored by intrepid weekend travelers.

Washington replaced Philadelphia as the nation’s capital in 1790, due to a central location on the East Coast that made it accessible to both southern and northern states. Today, DC is only a three-hour Amtrak train (or four-and-a-half-hour Bolt Bus) down from New York City, making it the perfect candidate for this edition of carless weekend travel. Whether you’re interested in art or history, cocktails or tapas, there’s something for everyone in Washington, DC. So pack up your bags (and maybe some protest signs), and read on for your travel guide to 48 hours in the District.

Whether it’s the upscale Sofitel in Lafayette Square or one of the 10 boutique Kimpton Hotels located throughout the city, there are endless accommodation options for the luxury-seeking traveler in our nation’s capital. Additionally, iconic institutions such as The Ritz-Carlton, Georgetown and the Four Seasons both have enticing outposts in DC’s Georgetown neighborhood. Even if you end up somewhere other than the Four Seasons, we recommend making a reservation at the hotel’s restaurant, Bourbon Steak, and ordering a bourbon tasting. The server arrives with an entire cart of bourbon, so it’s probably best to plan this event for the evening — it will mean you can take advantage of the neighborhood’s lively bar scene as well.

Other chic choices include a Cambria Hotel centrally located in the bustling neighborhood of Shaw, or the ever-popular W Washington DC. Directly across the street from the Treasury Building, the W is a go-to spot for a reason: The hotel’s POV rooftop bar serves cocktails overlooking an unforgettable view of monuments and the White House.

First things first: East Potomac Park is the prime starting spot for touring the monuments of the National Mall (we particularly encourage visiting over cherry blossom season). Wake up early to catch the sunrise over the Tidal Basin — note that the Martin Luther King, Jr. Memorial gazes across the basin at the Thomas Jefferson Memorial (our nation’s third president enslaved over 600 people), symbolizing the country’s continuing evolution regarding civil rights. Continue tracing American history with a visit to the Newseum, only one block from the National Mall. Though many museums in DC are free, the Newseum is more than worth the price per ticket. The interactive museum chronicles the evolution of expression in this country, and it’s never been more important to educate yourself on the First Amendment.

The White House is, of course, another must-visit destination — whether to protest or merely witness a bit of living history. If the behavior of the current occupant has you feeling down, check out the free exhibits at the Renwick Gallery, a branch of the Smithsonian American Art Museum located across the street from the Eisenhower Executive Office Building. Once a well-kept local secret, The Renwick has become increasingly celebrated in recent years.

The American History and Natural History museums may get all the glory, but the National Portrait Gallery (featuring Obama’s presidential portrait) and National Gallery of Art (with an Insta-worthy blue rooster in the East Building) are decidedly underrated and far less crowded. Other lesser-known cultural attractions include the National Arboretum in northeast DC, where you can go on a nature walk and check out the National Bonsai & Penjing Museum, and Glenstone, an outdoor gallery of contemporary art in Potomac composed of 200 infinitely-Instagrammable acres featuring sculptures by Jeff Koons and Richard Serra. And while Glenstone may be DC’s equivalent of Storm King, the Dupont Underground is (in our humble opinion) far cooler than any art space in Manhattan. Only one mile away from the White House, this subterranean abandoned streetcar station in Dupont Circle has been transformed into an experiential platform for contemporary art. If you love street art, graffiti, live music, or anything new and innovative, the Dupont Underground is a must-see.

Continue your cultural tour by catching an installment of the speaker series at Politics and Prose, one of the city’s best independent bookstores. Book nerds should also visit the well-curated Upshur Street Books (which features an array of local artists) and the endless stacks of used titles at Capitol Hill Books, in the historic Eastern Market. Speaking of hidden gems, we recommend exploring the food hall and pop-up shops of Union Market (the old warehouse space next to Union Station) and visiting Salt & Sundry for all home-related treasures. If you’re more sartorially inclined, Tuckernuck corners the market on classic, all-American style — one visit to the company’s flagship in Georgetown is sure to have you in utter agreement (and weighed down with shopping bags on your way out the door). If you’re still in need of retail therapy, visit the District Wharf (the remodeled waterfront is the latest go-to shopping area) or CityCenterDC (which offers a solid selection of high-end brands and designers).

Take advantage of DC’s mild climate in the cooler months by visiting some of the city’s parks (the relatively balmy weather will be especially appreciated by visitors from Boston or New York City). Walk among the historic Capitol Stones of Rock Creek Park, or journey 20 minutes outside the capital to hike the Billy Goat Trail in Great Falls, which boasts a rock scramble and picturesque views of the Potomac River. On Sunday, stop by Meridian Hill/Malcolm X Park at 3pm to dance along with the liberated crowd at one of the weekly drum circles, a 40-year tradition in DC.

Spend an afternoon enjoying America’s favorite pastime (baseball, naturally) at Nationals Park, located in the heart of DC near Chinatown. Grab a drink at Bluejacket brewery before cheering on the home team of the nation’s capital. If you’re visiting during the winter, change course to the nearby Capital One Arena to witness what’s considered by many to be DC’s favorite sport: ice hockey. Of course, we’re partial to their NBA team, the Wizards, as well.

Finally, although the Smithsonian’s National Zoo is a must-see year-round (because of the pandas, obviously), we especially encourage visiting during ZooLights, an annual tradition when the zoo remains open at night, illuminated by festive lights for live music and events during the winter holiday season (most nights November 23 to January 1). Though the cherry blossoms may make spring the most appealing season to visit the National Mall, these picturesque outdoor lights at the National Zoo ensure that winter is the most #lit time of year for this DC attraction.

Where to Eat & Drink

Start your day at Baked & Wired, one of the most well-Instagrammed (and punniest) spots in Georgetown. Other options include Ladurée (in case you wish you were in the French capital instead), DGS Delicatessen (DC’s answer to Russ & Daughters for homesick New Yorkers), The Wydown (order the scones), and Tynan Coffee & Tea (this coffee shop’s cold brew is the city’s best-kept secret).

If you like pizza (“if”), then order the wood-fired pizza at Etto or Timber (the gourmet Petworth restaurant was once a pizza truck). For those looking for healthier offerings, Little Red Fox offers delicious, made-daily food selections, while Chaia serves fresh and simple ingredients on its all-veggie menu (and was once a farm-to-taco stand before opening its first-ever Georgetown storefront).

For French cuisine, Le Diplomate in Logan Circle has a bustling brunch scene, while Georgetown’s Chez Billy Sud is perfect for a date night (the fireplace at Bar à Vin next door is the coziest place in all of DC). Barcelona Wine Bar, a Spanish tapas spot on 14th Street, is always a good time for dinner, but be sure to book a reservation (the popular restaurant is always crowded). Estadio is another good option for tapas, while the Thai food at Thip Khao is heaven (order the crispy rice salad). DC has a sizable Ethiopian population, so you’d be remiss not to check out one of the many delicious West African restaurants in the city. We recommend Keren for the lively atmosphere, welcoming environment (arrive early, stay until late), and shared dishes (great for groups).

For drinks, check out the Wunder Garten beer garden in balmy weather (though the climate-controlled space is open even in winter) or Off the Record on a chillier night (hidden away in the basement of the Hay Adams, this bar is a DC classic). If you’re feeling fancy and don’t mind a wait, head to Blagden Alley to sample the award-winning cocktails at Columbia Room. Lovers of speakeasies should visit the Prohibition-themed Sotto. If the weather is warm, head to the back patio of Hill Prince and prepare to get your dance on, or visit the open-air terrace at Jack Rose, where bourbon lines the walls (remember to order the chicken skins and a double whiskey neat). Meanwhile, Colony Club transforms from a hip cafe into an even hipper (or hipster) bar at sundown.

Visit U Street for a night on the town: Start your evening with fresh sashimi at Izakaya Seki and a quick drink at El Rey before exploring the area. Catch a movie at Atlantic Plumbing — the indie theatre serves food and wine to its patrons — or watch a concert at the iconic 9:30 Club or multi-level (and locally beloved) venue Black Cat.

If you’re looking for a dive bar, play Buckhead at Solly’s Tavern, compete in table tennis at Comet Ping Pong, or order Bud Lights at Red Derby (this bar in northern Columbia Heights only sells its drinks in cans). Additionally, the fratty late-night scene at The Wonderland Ballroom transitions to a low-key brunch spot after the sun comes up (a well-earned reward for staying up all night).

Tag us in your go-to spots in DC on Instagram @BritandCo.

Katherine Parker-Magyar
Katherine is a freelance writer focusing on travel, culture, lifestyle, and politics. Her work has appeared in The Week, Tasting Table, Elite Daily, POPSUGAR, and Electrify, among other publications. She's traveled to all 50 states and 40 countries, but calls New York City home. Follow along on Instagram at @katherineparkermagyar or visit her website at www.katherineparkermagyar.com.
Carless Weekend
Travel
Carless Weekend inspiration Learning Vacation
More From Travel