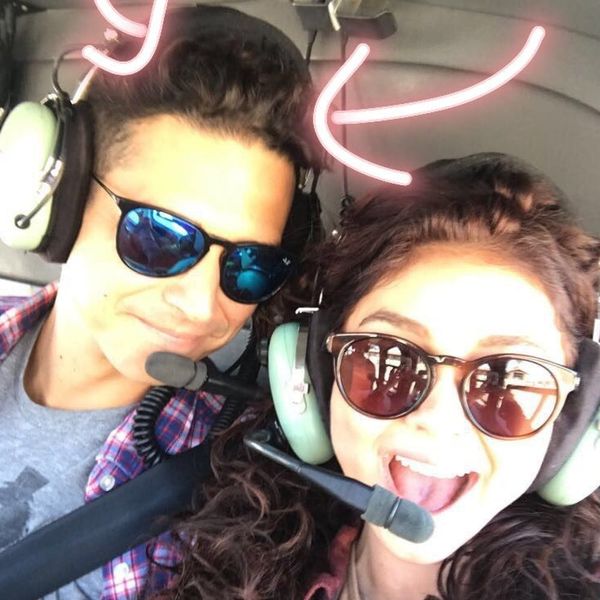 Miley Cyrus isn’t the only one combining her birthday celebrations with Thanksgiving — Sarah Hyland turns 27 on Friday, November 24, and her boyfriend, Wells Adams, surprised her with the sweetest outing before they settled in for a festive feast with a group of friends.

What you want Thanksgiving to be Vs. What it actually is. #boxwine

On Thursday, Hyland shared the details of the surprise on her Instagram story, revealing that Adams would be taking her on a helicopter ride to Catalina Island near Los Angeles. She warned her followers of the “annoyingly cute” Instagram videos to come, and while she wasn’t lying about sharing a lot of clips, we’d say there was nothing annoying about their day — just cute.

“This one SURPRISED ME with a helicopter ride to Catalina to celebrate my birthday early and… I can’t. I’m all gushy,” the Modern Family star captioned one snap. She then shared photos of the couple in the air, calling Adams “the cutest ever.”

At the end of the trip, Hyland shared another sweet snap of her and Adams, this time standing in front of the helicopter, hugging and smiling. “Ok I think I’m done with the gush for now,” the caption read.

Later, the couple celebrated the Thanksgiving holiday with a group of friends, making sure to post a goofy selfie that was just right for the occasion.

Adams and Hyland first sparked dating rumors when they were spotted sporting a couples Halloween costume, and things have moved pretty quickly from there. But while they’re happy to share snippets of their time together via social media, both have stated that they won’t be speaking more about their relationship in the media.

“I’ve made the mistake in the past of being way too open and talking way too much about [relationships],” Hyland previously wrote on Twitter. “This time is different. It’s special. And I will share what I [deem] ‘appropriate’ on social media because I still want you all to be updated.”

How much do you share about your relationships on social media? Tell us @BritandCo.