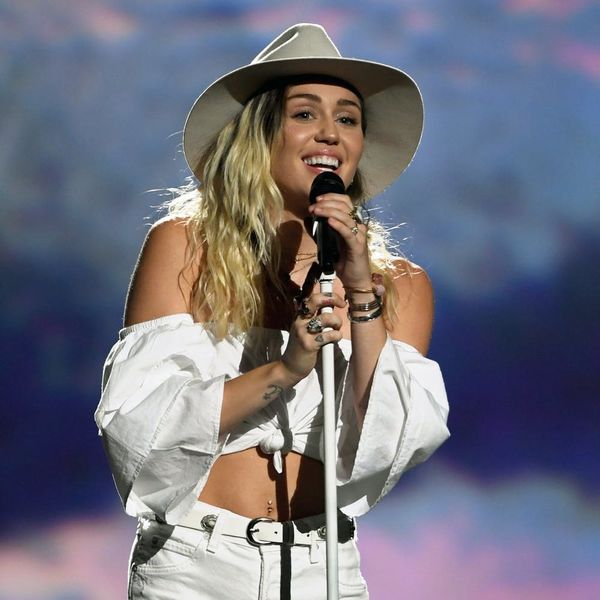 The 2017 Teen Choice Awards proved that there’s a lot of talent (and inspo-worthy fashion) in young Hollywood right now. And while we were all about celebrating the nominees and lucky winners this year, there was one thing missing from the show. Scratch that — there was one PERSON missing. Despite being honored with the event’s “Ultimate Choice” Award, Miley Cyrus was a no-show, and now we know why.

“To my dearest fans & all of those watching @teenchoicefox ! I want to say thank you from the very bottom of my heart for presenting me with #TheUltimateChoiceAward,” the 24-year-old said via an Instagram post. (She also happened to be nominated in four categories — Choice Female Artist, Choice Song: Female Artist for “Malibu,” Choice Summer Female Artist, and Choice Summer Song for “Malibu,” though she lost to other musicians for those awards.)

“I am beyond bummed I couldn’t make it to the show as I had every intention of being there to accept and celebrate this honor,” she continued in her message. “I created an unrealistic schedule for myself…”

While we’re giving Cyrus a virtual high-five for recognizing her limits (even if it did come a little late, after over-scheduling herself), we’re also giddy over the reason she’s so busy.

“I’ve been tryin to keep the secret but I can’t hide it any longer! My new single / music video #YoungerNow will be dropping this Friday, Aug 18th & I am sooooooo EXCITED to share it with all of you!” she wrote. She ended her message with what sounds like a snippet from her would-be Ultimate Choice Award acceptance speech: “I hope to always make people smile and shine light thru my work! I look forward to making music for the rest of my life and I’m thankful everyday for those who listen! I am sending so much love and peace into the world right now because THATS what we need most! Love Love & more LOVE! ❤️💙💚💛💜❤️💙💚💛💜.”

Did you watch the Teen Choice Awards? What was your favorite part? Let us know @BritandCo!

Desiree O
Desirée O is a ‘Professional Bohemian’ who loves anything and everything related to the arts, entertainment, and pop culture. She ADORES being a ‘Newsy’ for Brit + Co, covering all of the latest tidbits of awesomeness that you want to read about. When she’s not writing, she’s either making messy art, going on long adventurous walks with her camera, or poking around over at bohemianizm (http://www.bohemianizm.com/). You can find out about Desirée O and her work at http://DesireeO.com/ or follow her on Twitter @DesireeO.
Miley Cyrus
Pop Culture
Miley Cyrus