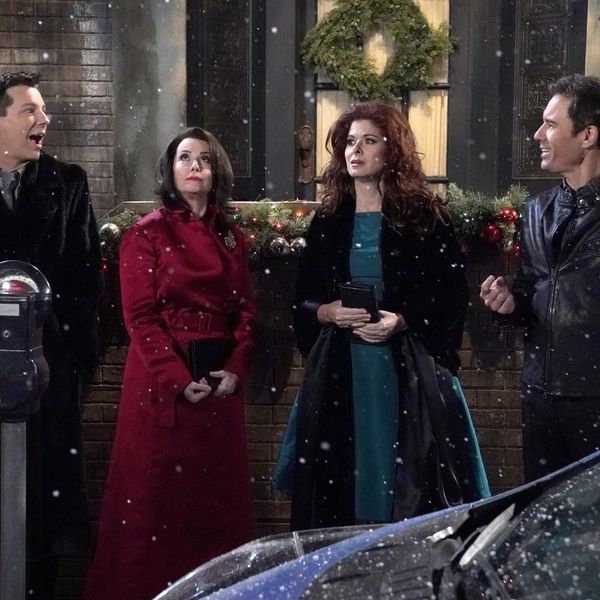 NBC’s Will & Grace revival hasn’t shied away from tackling tricky story lines. The show premiered by perfectly explaining away the previous series finale, and when it came time to say goodbye to the beloved Rosario, the cast gave her the emotional sendoff she deserved. On the most recent holiday episode, Will & Grace paid tribute to another key character in the show with a heartwarming tribute to the late Debbie Reynolds.

Reynolds played Grace Adler’s mom, Bobbi, through the series’ original eight-season run. In Tuesday’s Christmas special, titled “A Gay Olde Christmas,” the cast traveled back in time while, all throughout, a beautiful painted portrait of a young Reynolds watched over them.

Debra Messing shared a sweet selfie with the portrait before the show aired. Wearing the same dress that Reynolds is seen wearing in the painting, she wrote, “Debbie is with me in tonight’s flashback Christmas Episode. I love that portrait of her. It captures her Light.” She included a heart emoji in memory of the legendary actress.

Debbie is with me in tonight’s flashback Christmas Episode. I love that portrait of her. It captures her Light. ❤️

Reynolds passed away almost one year ago, in late December 2016, just one day after her daughter Carrie Fisher died of a heart attack at the age of 60. At the time, Messing wrote a lengthy and loving message for her late TV mom, sharing her heartbreak with the world.

“She was loving, and bawdy, and playful — a consummate pro — old school and yet had the work ethic and investment in her craft of a new fiery up and comer,” Messing wrote on Instagram. “I lost my mom a few years ago. She loved that Debbie was my TV mom.”

Reynolds appeared on 12 episodes of Will & Grace, and remains one of the show’s most memorable recurring guest stars.

Did you watch the Will & Grace holiday special? Let us know @BritandCo!