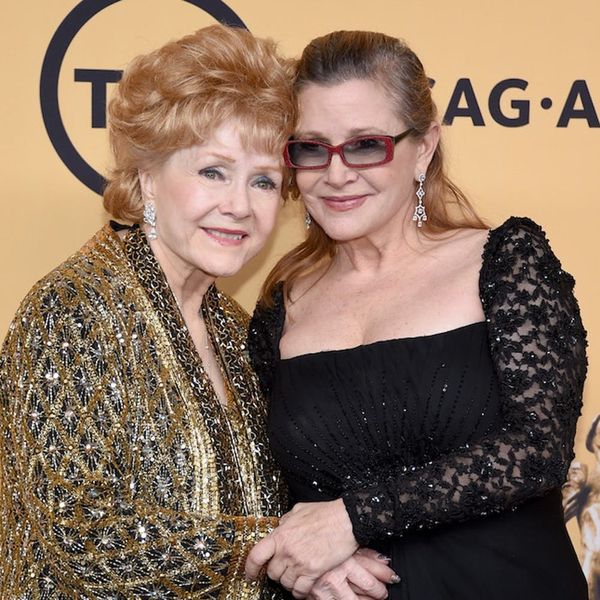 Hollywood’s mourning of another loss leads today’s top news stories. Check that and more out below.

1. After being rushed to the hospital for a possible stroke on Wednesday afternoon, Debbie Reynolds has died at the age of 84 — just one day after her daughter Carrie Fisher died of a heart attack at the age of 60. Her son Todd Fisher tells TMZ that just 15 minutes before her stroke, she said “I miss her so much, I want to be with Carrie.” Devastating. (Photo via Ethan Miller/Getty)

2. Pink had her baby boy over the holidays and shared his first pic and name on Instagram! The singer and husband Carey Hart welcomed little Jameson Moon Hart on Boxing Day, December 26, and appear to be over the…moon. Pun intended. “I love my baby daddy,” Pink captioned another pic of little Jameson being held by his dad. Congrats to the growing family!

3. JonBenet Ramsey’s brother is suing CBS for $750 million over their TV special on his sister. CBS’ docuseries on JonBenet’s unsolved murder theorized that it was most likely her brother Burke Ramsey who killed her, and he is now suing to “redress the permanent damage to his reputation resulting from defendants’ false accusation that he killed his sister, JonBenét Ramsey.” Burke had also previously filed a claim against a forensic pathologist Dr. Werner Spitz featured in the special. (h/t Us, image via CBS)

Tweet storm. I was on a plane a couple of days ago. A guy took off his jeans & lounged around in his boxers with his feet up on the wall. pic.twitter.com/CHcsWXnlNB

4. Just be thankful you didn’t have to sit next to a guy who took his pants off on a flight like Silicon Valley‘s Kumail Nanjiani did. Kumail explains that on a recent flight, a passenger took off his pants and got comfy in his boxers, and even PUT HIS FEET UP ON THE WALL while watching TV. This was in the front row, so everyone had a full view as they walked by. He didn’t listen to flight attendant requests to put them back on, and waited until the last minute during landing to do so. Kumail’s whole tweetstorm is worth a read, a lol, and a head shake.

I told myself I would eat salad today, but things change. 😅Chocolate Strawberry Oreos are here! Blog review incoming tonight.

5. ALERT: Chocolate strawberry Oreos are HERE. In case you haven’t had enough sweet treats over the holidays, select stores are now carrying these dreamy looking new Oreo flavors. The creme center is chocolate, and has a dollop of strawberry creme right in the middle. These are going to be a problem!

6. Quote of the day: “To this day, Chris would take a bullet for me.” Gwyneth Paltrow tells InStyle about the strong family bond her and ex-husband Chris Martin still share. It’s kind of sweet!

Have you ever stayed friends with an ex? Let us know over at @BritandCo!