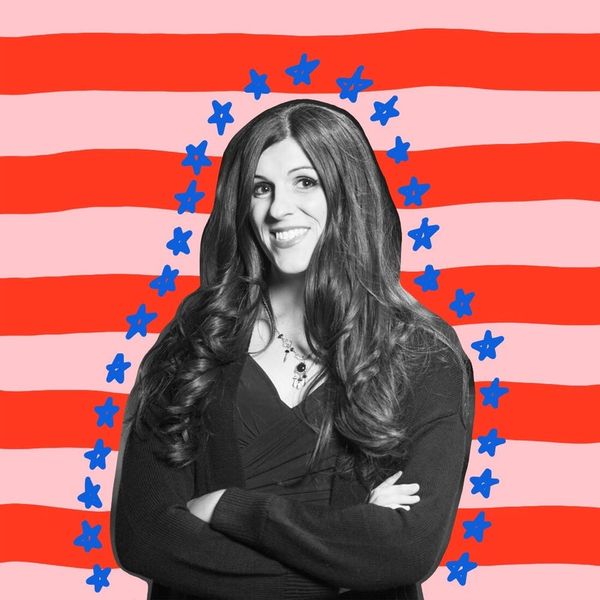 Women Who Run is a series highlighting female candidates currently running for office. Whether the roles they’re campaigning for are in local, state, or national government, they’re all proof that more women are getting involved in politics than ever before.

These days, Danica Roem doesn’t have much time for social outings. The 32-year-old ex-journalist, heavy metal singer, and lifelong resident of Manassas, Virginia is busy campaigning for a seat in the Virginia House of Delegates in a historic political race. She’s up against someone who’s had the job for 25 years. She’s also the first transgender candidate ever to run for the position.

Roem’s election date is just over two months away, and she and her team are in total crunch mode. But recently, her friend scored two tickets to a Metallica show. It was too good an offer to pass up.

“That was the first time I’d seen Metallica since I transitioned, and I cried,” says Roem. “That definitely did not happen when I saw them on that exact stage 17 years ago when I was a little, 15-year-old closet case. But as an out stepmom, with a nine-year-old stepdaughter, and having seen everything that’s happened with that band over the last 17 years, I realized my own personal changes and growth over 17 years. I looked at the band and thought, ‘You’re still here and I’m still here, too.’”

While Roem is welcoming of the support she’s received as the first trans candidate to run for the Virginia House of Delegates, her focus is entirely on the hyperlocal issues affecting her district.

“I’ve had reporters literally tell me that “transgender candidate” in their headline brings in a massive amount of clicks,” she tells us by phone. “Then, when you actually get into the story, it turns out, ‘oh, she’s a public policy nerd who talks way too much about Route 28′” — a major thoroughfare that has been a pain point in the district for decades.

That said, Roem cares deeply about working to keep her home state an inclusive space in the country. “No matter what you look like, where you come from, how you worship or who you love, everyone should feel welcome in our Virginia,” she says.

Here, we talk with Roem about her campaign and what inspired her to run for office for the first time ever.

Roem: Our [Virginia House of Delegates] 2015 nominee, Don Shaw, emailed me saying he had to move out of the district and couldn’t run, and said I’d be a good candidate. I didn’t even respond to that email, but the next day I got a call from Delegate Rip Sullivan saying the same thing. I talked to him for a while, and a lot of the local elected and non-elected Democrats in the area, who all said the same thing, and so I decided to do it.

I knew exactly what I was getting myself into. Very few things in the campaign have surprised me this year. I was well-trained: I attended the Victory Fund’s campaign training program last year in Dallas. I know the public policy issues of the district thoroughly, from nine years, two months, and two weeks of covering them as a journalist. And I know what I need to do to win. I’ve covered politics at the federal, state, local, and even town level for 11 years. I know what I’m doing.

Roem: My platform consists of three key issues: transportation, economic development, and education, all while working to make Virginia a more inclusive commonwealth.

I’ve made fixing Route 28 my number one priority. The next issue is finding a cost-effective way to extend the VRE [the Virginia Railway Express] to incentivize business owners to set up shop in Manassas Park and western Prince William County. And I want to attract the best and brightest talent to teach at our schools by raising teacher pay in Prince William County and Manassas Park so it’s not the lowest in northern Virginia.

Roem: Delegate Marshall has not fixed Route 28. He’s had 25 years to get it done, and he hasn’t gotten it done. He blames his own constituents for his inability to get adequate transportation funding. And as one of his constituents, I’ve had enough of it.

I’m also a journalist who understands the public policy issues, and I can do a better job than Delegate Marshall who, in his 25th year in office, passed two bills this year. Last year he went one for 41. Which means that 68 of his 71 bills in the last two years died. I know I can do better than that. I can trip over the chair and fall forward, and as long as I land on my face, I’ll have passed more bills than that my first two years.

B+C: You’ve said your constituents don’t care that you’re “the transgender candidate.” Do you fear any silent discrimination showing up on election day?

The way that I like to put it is, if you’re stuck on Route 28, and you can’t get where it is that you’re trying to go, do you really care about the gender of the person who has the best ideas to alleviate your commute? At that point, of all the obscenities that you’re yelling, probably none of them have to deal with gender identity. You just want your commute fixed. You want the road fixed.

Roem: The election is on November 7, 2017. The three things I need from supporters are for people to donate at DanicaforDelegate.com. I need people to sign up to volunteer to either knock on doors or make phone calls, both of which you can do at the website too. And the last thing we need people to do is keep spreading the word.