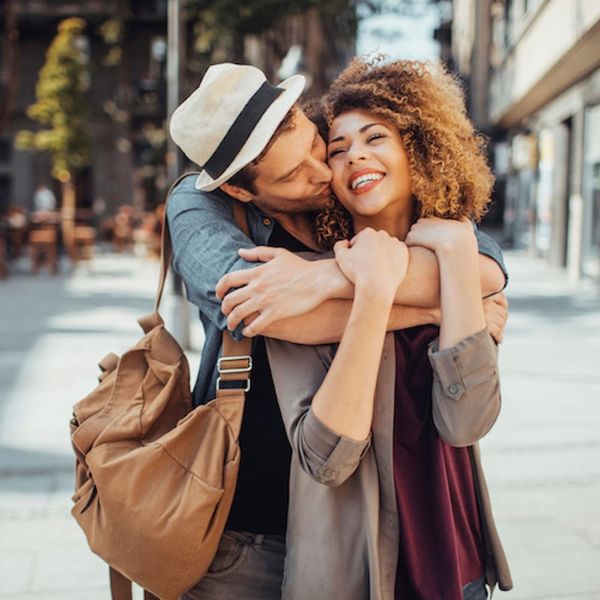 Tinder sometimes gets a bad rap as purely a hook-up app used only by, say, thirsty dudes who can’t attract women in real life, but new data shows that you’re actually more likely to find a serious relationship on Tinder than through offline dating. Who knew?! Tinder’s recently released data busts some dating myths and shows that there are tons of upsides to dating online, including the fact that you’re actually more likely to find love through your screen than IRL.

There’s a common perception that committed dating has been killed off by apps like Tinder, but the opposite appears to be true. In their national survey of daters between 18 and 35 years of age, Tinder researchers found that nearly three-quarters (74 percent) of online daters have been in at least one committed relationship. This number drops to less than half (49 percent) for those who date offline.

The data also reveals that fidelity is really important to both online and offline daters, but slightly moreso for the online crowd. Also, 93 percent of people who date online said fidelity was somewhat or very important to them, compared with 90 percent among offline-only daters.

Not only are people who are interested in committed relationships much more likely to be seeking a relationship online, but folks who date online are much less judgmental than people who only date offline. Tinder’s data shows that 20 percent of offline daters who wouldn’t consider dating online consider different career aspirations to be a total deal-breaker for potential new partners. Only 13 percent of online daters said the same.

Anyone who has spent some time on Tinder knows that the number of people “in your area” who are looking to meet someone can be overwhelming — one could easily swipe left and right for hours. But Tinder found that the number of available people to date doesn’t stop people who use the app from committing to someone they like. Only nine percent of Tinder users surveyed said they had a hard time committing because of dating options, white 44 percent of online daters overall and 42 percent of offline daters said the same.

We spoke to two women who found themselves in long-term relationships after swiping right a few years ago on Tinder.

Ilana, who is 26 and lives in New York, tells us she wasn’t necessarily looking for love when she found her partner of nearly three years on Tinder — she just wanted to find someone who would treat her well. While she was open to a relationship, she says she was very surprised to find herself in a long-term relationship. In fact, she was right about to delete the app when she found her love.

Finding love on Tinder also came as a big surprise to Audra, who says she found her partner of eight months while she was bored and swiping through because she was jet-lagged from a trip. Before that, she tells us she’d only use Tinder to find dates while she was traveling.

In its coverage of Tinder’s new data, the New York Times notes that the findings still require additional research before anyone can know how accurate they are or how broadly they should be applied. The Times notes that by surveying only millennials, a group that is more prone to use online dating, the results comparing online to offline daters could be skewed.

But of course, millennials use dating apps more than any other age group, so surveying millennials about this subject is a good start, at a minimum (Tinder is also the most popular dating app overall for any age group). Further, Tinder’s findings jive with previous research on marriage and online dating. According to a 2013 report from the University of Chicago, two-thirds of marriages between 2005 and 2012 were the result of relationships that started online.

Nobody is here to argue that dating in any format is easy. It’s messy, can be difficult, and there’s always the chance that it’ll end in heartbreak, but against the stereotypes, the data shows that plenty of people are finding the real deal online.

Are you in a long-term relationship with someone you met on Tinder? Tell us about it on Twitter @BritandCo.

Elizabeth King
Elizabeth King is a politics, history, and culture writer based in the Twin Cities. She is generally pretty cranky but still enjoys traveling, music from the early 2000's, and plotting the resistance. Feel free to say hi on Twitter at @ekingc or check out some of her work at www.elizabethcking.com.
Apps
Relationships
Apps Dating
More From Relationships