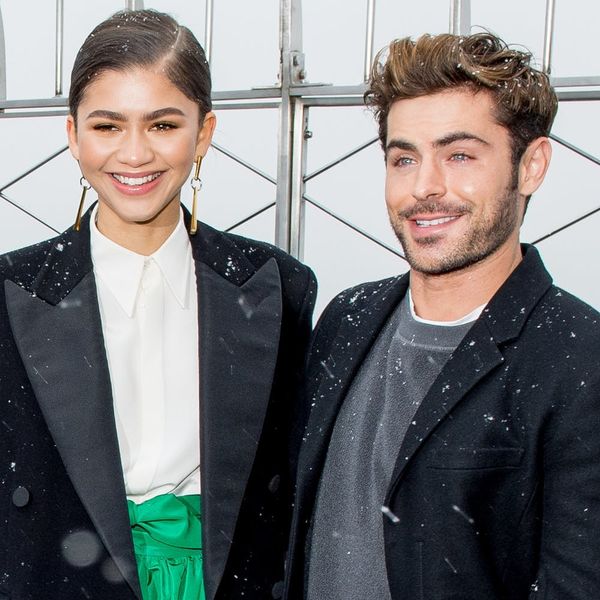 We were already prepared to head out and buy tickets to The Greatest Showman after Zac Efron confessed that the kiss he shares with Zendaya in the film might be his “favorite kiss ever,” but his co-star’s latest admission about the film, which may or may not include a cringe-worthy collision, has us even more intrigued!

The incident in question occurred as the “Ride Me” singer and the Baywatch star, who took on the role of her star-crossed stage actor love, Phillip Carlyle, shared a touching scene involving the trapeze. As it turns out, those spinning moves weren’t quite as easy as the actors made them look.

Sitting down for a chat on The Tonight Show Starring Jimmy Fallon, Zendaya, 21, revealed that her prep for role of acrobat Anne Wheeler was rather intense, saying, “It was a lot of training. It was a lot of… just literally getting up there and going for it.” She wasn’t kidding, adding, “I remember I had been rehearsing on this specific rig that I was used to. I had become normal with that height difference, and there was a net. I felt good and comfortable, and I had been doing it for a while. I was like, ‘Okay, cool. I’m a trapeze artist, now! This is great!’”

#Repost @Zendaya: The making of a trapeze artist..btw Our duet is available now...so go listen and stuff🤗✨#RewriteTheStars @ZacEfron

But when it was time for the cameras to start rolling, she felt less confident in her skills. Especially considering the fact that the first scene she shot with the High School Musical star was the complicated aerial spin move. “The rig was 15 to 20 feet taller and there was no net, because back in the day, they didn’t have those yet,” she explained. “I was hooked up, so I’m safe, but visually — that’s a lot to get over.”

Thankfully, one of the project’s megastars stepped in. “Right as I was going to go up in the cherry picker, Hugh Jackman walked by and he goes, ‘Zendaya, you’re a badass.’ I was like, ‘Take me up! Hugh Jackman called me a badass!’”

Still, it wasn’t enough for the pair to avoid a collision. “We’re supposed to grab onto each other with the other arm and begin like, this swing, which is in all the posters and it’s beautiful — and that’s great,” she said with a pause “But, if you don’t catch each other…”

She didn’t need to finish her sentence, smacking her hands together instead to mimic exactly what had happened when she and Efron, 30, suffered from one heck of an unromantic fail. And it wasn’t their last, either.

The honest star admitted, “And that’s just one of the many that we could choose from for that specific body slam!” Ouch!

Check out their painful-looking collision in the clip above and catch the more successful version when The Greatest Showman hits theaters on December 22!

Are you impressed with Zendaya’s trapeze work? Let us know @BritandCo!

Desiree O
Desirée O is a ‘Professional Bohemian’ who loves anything and everything related to the arts, entertainment, and pop culture. She ADORES being a ‘Newsy’ for Brit + Co, covering all of the latest tidbits of awesomeness that you want to read about. When she’s not writing, she’s either making messy art, going on long adventurous walks with her camera, or poking around over at bohemianizm (http://www.bohemianizm.com/). You can find out about Desirée O and her work at http://DesireeO.com/ or follow her on Twitter @DesireeO.
Celebrities
Celebrity News
Celebrities Movies
More From Celebrity News