10 Ways to Turn a Scarf into a Vest 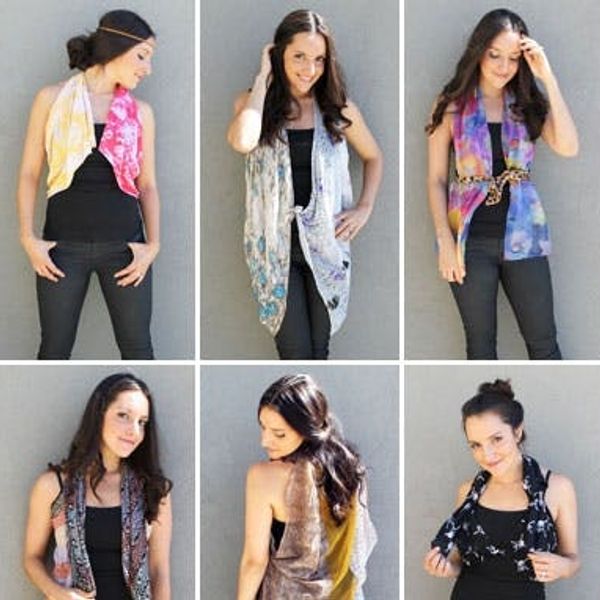 When we stumbled across this gorgeous DVF scarf vest on Shopbop the other day, we were intimidated by the $295 price tag but super inspired by the design. Not only do we have a surplus of colorfully patterned scarves, but vests happen to be one of the best ways to transition summer clothes into early autumn.

So, instead of creating one way to turn a scarf into a vest, we created 10! Half of these how-tos involve a sewing machine or needle and thread, and the other half are created with a few clever knots. Here we go!

The contrast of a highly structured belt and flowing jersey knit makes for a gorgeous little piece.

The first thing to do is cut off the buckle or d-ring at the end of your belt and sew off the end. Lay your belt down. Lay the scarf down parallel to the belt. Pin about 6 inches in the middle of both. Then bring the ends in to create your arm holes. Pin all the way down each end and sew.

We promise, you will use this one more than you think.

It works for just about any long scarf. Fold your scarf in half. Tie one folded corner with one end corner, and you magically have a racerback vest. Amazing, right?

The steps for this are in the title!

Take two summery silk scarves. Tie two ends together and drape around your neck. Then tie the front corners together and the same with the back. That’s it!

Ok, maybe this is a little risqué to wear just as a halter, but it definitely echoes summer halter style.

Simply drape one scarf around your shoulders and belt with the second scarf. Lovely.

Definitely the easiest one on here, the purple loop is just that. A purple loop!

Tie to ends of a scarf together and wear as a vest. Who knew chic could be so easy?

The colors of this combo make us think of waves splashing against the shore.

The first thing to do is cut your large scarf in half. We like the crochet look of this one in contrast to the crinkled beige scarf we’ve paired with it. Cut, pin, and sew! For all of these, it’s best to measure around yourself as there will be small differences for each person and each scarf.

Racerbacks can be glam too. This vest is created the exact same way as our neon little number, but using a longer pashima-style scarf instead.

You could easily rock this over a little black dress or at a summer wedding after the sun sets.

Made using not one, not two, not three, but four scarves (!), this one is definitely a unique piece.

For the front of the vest, we used a jersey knit scarf that could easily be replicated using a couple t-shirts. The back is made using three silk scarves, cut to be the same size. Sew the 3 silk ones together so they turn into a larger swatch of fabric. Follow the same steps as the belted number.

This one isn’t nearly as tough as it sounds. You’re basically turning a regular scarf into a circle with a bit of flair.

Lay your scarf out across a table. Fold each end in about 18 inches. Attach the folded ends with a little stitch. You’ll have little flaps in the front where you can add a snap button. Add a couple studs for flair wherever suits you, and you’re done

The format of this one is similar to the belted jersey knit in how you put everything together.

Sew about 6 inches at the middle for the part that will go behind the neck, then the rest, allowing for arm holes. This one is definitely our favorite!

Misty Spinney
Misty Spinney is a hair stylist, makeup artist, and fashion stylist with a strong background in design and deep passion for creativity.
DIY Style