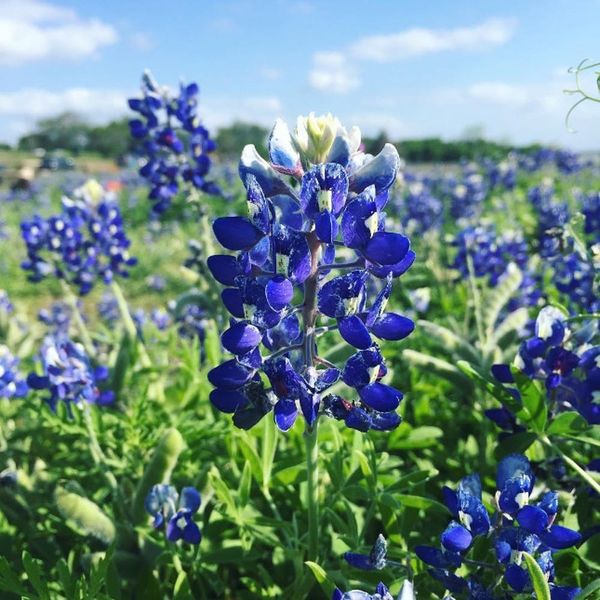 Planning a spring break with kids, your boo, gal pals or solo? From this year's California super bloom to the annual sakura season in Washington, DC, there are tons of beautiful and ultra-colorful places to spot birds and blossoms across the USA. Since sharing what you see is one of the best things about taking a trip, we talked to Laura Scruggs from Nations Photo Lab to get the 411 on where and how to score the best shots and snaps when you travel this spring. Read on for her top picks, plus a handful of handy tips.

1. Chicago Botanic Gardens, Chicago, IL: The ultra-impressive Chicago Botanic Gardens gardens span a massive 385 acres, and there's no better time to scope 'em out than in the spring. Scruggs confirms that April, May, and early June are the garden's most colorful months of the year. “Pack your macro lens, throw on some walking shoes, and go nuts!" she encourages.

2. Joshua Tree National Park, CA: You might not think of the desert when someone mentions spring, but Joshua Tree National Park has amazing biodiversity, which makes it a super-special place to visit. “Head to the park in the spring to avoid the crowds and the heat (average spring temperatures range from the mid-70s to the mid-80s, whereas summer temps rise up above 100 degrees Fahrenheit)," suggests Scruggs. “Check the Wildflower Bloom Report on the way in, and get ready to snap away." Want to head over, RV style? Check out this RV camping guide to Joshua Tree from Your RV Lifestyle for ways to make the most of your JT trip.

3. Bluebonnet Fields, Ennis, TX: Does anything scream spring as much as a field of bright flowers? Scruggs shares that Texas's national flowers (both species of bluebonnets) bloom in the springtime, in the rural areas between Dallas, Houston, and San Antonio. “Ennis, TX has 40 miles of bluebonnet trails, which are actually loaded on their mobile app. Once you've captured your prizewinning shot, enter your photo into the annual Bloomin' Bluebonnet Photo Contest for a chance to win a year's worth of bragging rights."

4. Cherry Blossom Festival, Washington, DC: A little bit of history courtesy of Scruggs: In 1912, the mayor of Tokyo delivered 3,000 cherry trees to the people of Washington, DC as a symbol of the two cities' enduring friendship. Since then, the celebration around the trees' gorgeous blooms has continued to grow. “The famous cherry blossoms bloom annually in the spring, and can be photographed easily by boat, bike, or on foot," she notes. “The Cherry Blossom Festival is photo-worthy beyond the trees too; the city hosts street festivals, parades, and fireworks along the waterfront."

5. Great Smoky Mountains National Park, Gatlinburg, TN: “Great Smoky Mountains National Park is the number one most visited national park in America for a reason," asserts Scruggs. “It sits among the high elevation areas of Tennessee and North Carolina and boasts over 1,500 species of flowering plants, most of which are in bloom during the spring months of March, April, and May." She tells us that as soon as the snow melts, flowing waterfalls and colorful vistas become a brilliant background for an unforgettable family picture or a postcard-perfect landscape photo.

6. Antelope Valley Poppy Reserve, Lancaster, CA: For photographers who love color, Scruggs maintains that the Antelope Valley Poppy Reserve is absolutely worthy of an annual trip. “With a landscape that changes daily (the wildflowers in bloom change based on the time of day, temperature, and location in the valley), you'll almost never capture the same image twice." The wildflower season lasts from late February through May, making it a great way to celebrate Mother's Day too.

7. Central Park, New York, NY: Scruggs points out that springtime in New York is special because it marks the annual return for tons of migrating birds, as well as beautiful blooms (think white azaleas and pink rhododendrons) that blossom in spots like The Ramble and Azalea Walk. “Whether you're in New York City for an engagement session or a trip with friends, you're guaranteed to especially love what you see on the other side of the lens in spring," Scruggs says.

8. Stowe, VT: Scruggs admits that Vermont might be most popular among snow bunnies and skiers, but its beauty in the springtime is undeniable. “Not only is the air sugary-sweet with the smell of fresh maple syrup (no seriously, it's syrup season!), but it's also the prime time to take a tour of nature on two wheels." She prompts us to hit up the Stowe Recreation Path, which winds over five miles of astounding mountain views that are almost too beautiful to be real. Count us in!

9. San Juan Islands, WA: When it comes to the Pacific Northwest, the San Juan Islands are where it's at. Scruggs observes, “May is the beginning of prime Orca-spotting season, and there's no better place to see them than in the San Juan Islands." The islands are just a few hours north of Seattle, up near the US-Canadian border. Just as amazing, you can also expect to see porpoises, sea lions, and other sea life — along with picture-perfect backgrounds like historic lighthouses and 25 acres of organic lavender. Talk about a wow factor.

10. Kentucky Derby Festival, Louisville, KY: Louisville really knows how to throw a party! To celebrate the Race for the Roses, the city hosts over 100 events, including BalloonFest and Thunder Over Louisville — two prime opportunities to capture some serious color in the spring. Scruggs advises, “Be sure to stop in Lexington at the Kentucky Horse Park to snap a photo of the majestic creatures in their lush, green paradise on your way out of town." We wouldn't miss it.

11. Little Tybee Island, GA: Little Tybee Island is actually twice the size of its better-known neighbor, Tybee Island, but instead of beach houses, it's filled with miles of marshland, forests, and beaches. When it comes to birds, this is totally the place to be: Hundreds of species spend time on the island while making their spring migration, including the breathtaking Painted Bunting. Scruggs reveals that Little Tybee Island is an ideal spot for anyone who wants to capture nature without buildings, cell towers, and other markers of civilization in each shot.

12. Fish Creek Falls, Steamboat Springs, CO: Northwestern Colorado is pretty gorgeous all year, but the Fish Creek Falls are extra-amazing during springtime. “The ice and snow in the area melt just before the summer months, so late spring is the perfect time to capture the falls at their peak," Scruggs reports. “This is such a pretty place to experiment with long exposure photography while enjoying a peaceful picnic." Swoon.

What are your favorite places to photograph in the springtime? Show us your best shots on Instagram!

This article was updated and previously published in March 2017.

Krista Gray
Krista Gray is a web producer and freelance writer who lives in San Francisco. When she's not working with clients through her company GoldSquare, she loves reading, traveling, and learning new things.
Photography
Lifestyle
Photography travel