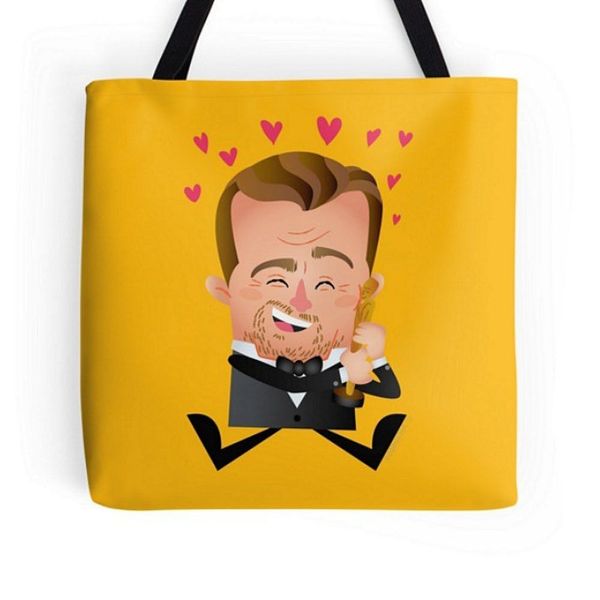 We’re only two and a half months into 2016, and there’s already been enough pop culture drama to fill an entire burn book. From Leo finally winning an Oscar to Kim Kardashian’s naked selfie (AKA her second attempt to break the Internet), let’s just say we’re pretty sure 2016 is going to be a year to remember. But for the true pop culture junkie, it isn’t enough to just retweet this year’s biggest pop culture moments. Not to worry, we’ve got you covered. These 10 mega-convenient and versatile tote bags are branded with 2016’s biggest headlines to date and will definitely keep your favorite stories #trending IRL.

1. Vic Matos Leonardo DiCaprio and His Oscar Tote ($20): It finally happened: Our fave Titanic heartthrob won his first Oscar. And the well-deserved Oscar for most fabulous tote definitely goes to this stunner, by Brazilian designer Vic Matos.

2. Cup of Sarcasm Adele and Lionel Hello Tote Bag ($22): We almost feel sorry for how many times Adele was asked about a potential Lionel Richie collab on the Oscars red carpet… But then again, it would kind of be the most amazing thing to ever happen, right?

3. Disfor If I Were a Kardashian Tote Bag ($20): From Kylie’s newest Puma ad to Kim K’s Internet-breaking nude bathroom selfie, it’s seems like America’s fave reality family will definitely be in for a fair few headlines this year — making this cheeky tote a sure-fire win.

4. Banana Almighty David Bowie Tote ($21): Pay tribute to one of the greats we tragically lost this year with this beautiful tote by Portuguese designer Banana Almighty.

5. Mauro Gatti Sole Organic Tote Bag ($19): After waiting decades for his Oscar win, our main man Leo spent his coveted moments talking about taking care of dear ol’ earthy. With this February breaking the worldwide temperature record, we can definitely see why global warming awareness will be trending all of 2016.

6. Tierra C3PO Tote Bag ($15): Although Star Wars technically came out in 2015, this mega blockbuster was a total hit this year — and you’ll be rocking this tote all the way to December 2017 when we get even more Jedi action.

7. Human Contains Hot Sauce Tote ($29): Let’s be honest, we’d do just about anything to be a little more like Bey — including carrying around this adorable tote, filled to the brim with them habañeros, of course.

9. Human Hogwarts Alumni Crest Tote ($29): The Potters are going back to Hogwarts?! This February, JK Rowling announced that the eighth book in the Harry Potter series will be released in paperback on July 31st — making this Hogwarts alumni tote perfect for all of us OG Potterheads.

10. Sploshftw Tokenism at Its Finest Tote Bags ($20): With the lack of racial diversity highlighted prominently at the 88th Academy Awards, Chris Rock definitely had to get his opening monologue right this time around. Show you’re in the know with this mint green graphic tote.

Which 2016 pop culture headline would you like to become your next fashion accessory? Tweet us your picks by mentioning @BritandCo.

Ashley Macey
Ashley Macey is a lifestyle freelance writer who loves all things fitness, wellness, and creativity. When she's not exploring her home in the Pacific Northwest with her dog Max, you'll probably find her curled up with a good book and some hot tea. Follow her daily jaunts on Twitter.
Tote Bag
Pop Culture
Tote Bag
More From Pop Culture