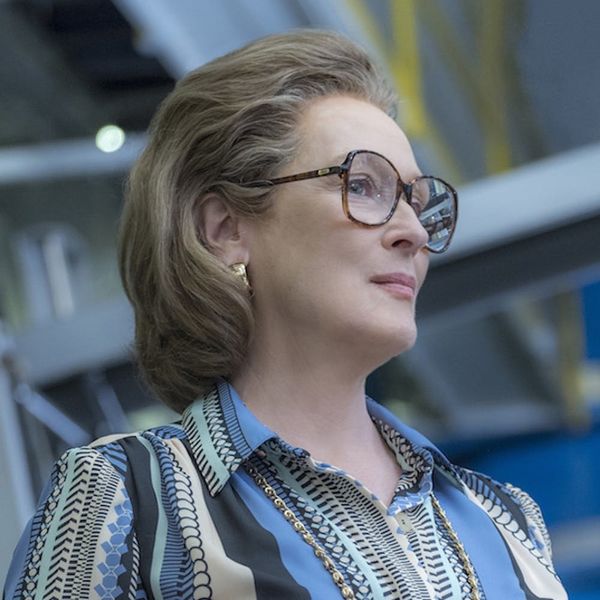 While there were a few surprising snubs among the 2018 Oscar nominations, there are also some pretty cool firsts and facts about the people and films the Academy did recognize. Click through to see some of the ways in which this year's nominees are breaking records and making history. (Photos via Kerry Hayes/Twentieth Century Fox + Niko Tavernise/Twentieth Century Fox + Justin Lubin/Universal Pictures + Steve Dietl/Netflix)
Octavia Spencer: Regardless of who wins, Spencer has made her mark on the awards this year! The Shape of Water star is up for Best Supporting Actress — her third-ever Oscar nomination — which ties her with Viola Davis as the most-nominated Black actress in the history of the Academy. She is also now the only Black actress to follow an Oscar win with two additional nominations. After taking home a statue for 2011's The Help, she was recognized last year with a nomination for her role in Hidden Figures. On top of that, she's the first Black actress to receive two back-to-back nominations. (Photo via Kerry Hayes/Twentieth Century Fox)
Mary J. Blige: Blige made history with her performance in Mudbound. She's now the only person — EVER — to be nominated for both Best Original Song and Best Supporting Actress in the same year. She's also the first actor to be nominated for a film directed by a woman of color. (Photo via Netflix)
Rachel Morrison: Mudbound's cast and crew are breaking all kinds of records. The film's cinematographer, Rachel Morrison, is now the first woman to be nominated in the Best Cinematography category. (Photo via Steve Dietl/Netflix)
Dee Rees: Mudbound director Dee Rees also made Oscars history by becoming the first Black woman to be nominated for Best Adapted Screenplay. She's now just the second Black woman ever to receive a screenwriting nomination from the Academy, following Suzanne de Passe's Best Original Screenplay nod as the co-writer for Lady Sings the Blues, way back in 1972 at the 45th Academy Awards. (Photo via Steve Dietl/Netflix)
Meryl Streep: Streep broke her *own* Oscars record for the most acting nominations when she scored a nod in the Best Actress category for her role as Katharine Graham in The Post. The industry icon has earned a staggering 21 Academy Awards nominations over the course of her career. (Photo via Niko Tavernise/Twentieth Century Fox)
Greta Gerwig: Gerwig certainly made a splash this year with Lady Bird. She's now the very first female director to land a Best Director nomination for her directorial debut, and the fifth female director ever to be nominated. This is on top of the fact that she's the first female director to be nominated since Kathryn Bigelow's nod for The Hurt Locker in 2010. (Bigelow is the only woman who's ever won the category, BTW.) (Photo via Merle Wallace/courtesy of A24)
Loving Vincent: From the very first glimpse, it's obvious that Loving Vincent is a masterpiece — and now it's a historic masterpiece. The movie is the first-ever fully painted film of its kind to be nominated for Best Animated Feature Film. (Photo via Breakthru Films/Trademark Films)
Logan: Hugh Jackman's performance as Wolverine wasn't recognized, but Logan earned itself a nomination for Best Adapted Screenplay, which makes it the first superhero comic-book film to be recognized in the category. (Photo via Ben Rothstein/Marvel)
Jordan Peele: Peele was completely overwhelmed by this year's nominations, and for good reason. Not only did he receive three *major* nods — for Best Picture, Best Director, and Best Original Screenplay — but he's also just the third person in Academy history and the first Black filmmaker to earn nominations in all three categories for a directorial debut. (Photo via Justin Lubin/Universal Pictures)
Get Out: While most Oscar-worthy movies are released in the fall, Get Out is the first film released in February to be nominated for an Oscar since 1991's (super creepy) The Silence of the Lambs. (Photo via Universal Pictures)
The Insult: Over in the Oscars Best Foreign Language Film category, Ziad Doueri's The Insult is the first Lebanese film to earn a nomination from the Academy. (Photo via Cohen Media Group)
Agnes Varda: At 89, Varda — nominated for Best Documentary Feature for Faces Places — is the oldest nominee in the Academy's history. James Ivory, nominated this year for Best Adapted Screenplay for Call Me By Your Name, is also 89, but his birthday is just a little over a week after Varda's. (Photo via Kevin Winter/Getty Images)
Christopher Plummer: While Varda and Ivory are the oldest overall nominees ever, Plummer is the oldest acting nominee at 88. He's up for Best Supporting Actor for All the Money in the World. (Photo via Giles Keyte/TriStar Pictures)
Timothee Chalamet: At 22 years old, the movie's star, Timothée Chalamet, is the youngest Best Actor nominee since 1939. (Photo via Sony Pictures Classics)
Greta Gerwig, Emily V. Gordon, and Vanessa Taylor: This is just the second time that three women have been nominated for Best Original Screenplay in one year. Lady Bird's Greta Gerwig, The Big Sick's Emily V. Gordon (with Kumail Nanjiani), and The Shape of Water's Vanessa Taylor (with Guillermo Del Toro) are all being recognized for their stellar work. (Photos via Christopher Polk/Getty Images for Turner Image + Christopher Polk/Getty Images for Turner Image + Walter McBride/FilmMagic)
Desiree O
Desirée O is a ‘Professional Bohemian’ who loves anything and everything related to the arts, entertainment, and pop culture. She ADORES being a ‘Newsy’ for Brit + Co, covering all of the latest tidbits of awesomeness that you want to read about. When she’s not writing, she’s either making messy art, going on long adventurous walks with her camera, or poking around over at bohemianizm (http://www.bohemianizm.com/). You can find out about Desirée O and her work at http://DesireeO.com/ or follow her on Twitter @DesireeO.
Awards Shows
Movies
Awards Shows Movies Oscars
More From Movies