WHOA! This Dress Was Made With a 3D Printing Pen 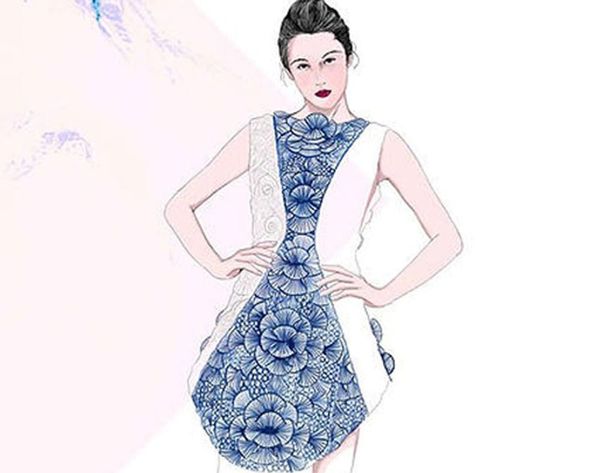 You’ll never find a fashion designer without a sketchbook on hand — after all, their drawings are the core basis for creating their garments IRL. But soon the steps that follow putting the concepts to paper might be entirely different — we’re talking game-changing here, folks. Instead of sourcing fabric and sewing the piece together to fit perfectly, designers will only need to use a pen to construct clothing.

This like-magic writing tool with the wearable “ink”we speak of is actually technology that already exists: the 3Doodler, which is essentially a 3D printing pen. And designers have already used it to draw a dress into being. Created by Hong Kong fashion studio SHIGO, the design was initially printed on cloth and draped on a mannequin before designers traced over the intricate outlines with the smartpen, layering lines of warm plastic to build the high-tech frock.

After three months of testing, production and adding on finishing touches, the hard-doodling team completed the look: an A-line cocktail dress that’s a total sight. Ornate geometric swirls and floral-inspired appliqués add a lightness to the stiff plastic dress — details that just couldn’t have been realized any other way. Plus the silhouette is so feminine that we could easily imagine wearing it with our favorite pair of black pumps… maybe to a standing room only event. Okay, so the frock isn’t exactly everyday wearable. But the drawn-to-life dress is really more about spotlighting how innovative tech can help us reimagine what’s possible (now re-read that sentence). We’re hoping that this is just the beginning of inspiring 3Doodler collaborations with artists, jewelry makers and other fashion designers… we mean, it does scream Project Runway Unconventional Challenge, doesn’t it?

Are you blown away be this 3D printed by-hand dress? What other ways would you use a 3Doodler — what would you build? Tell us in the comments below.