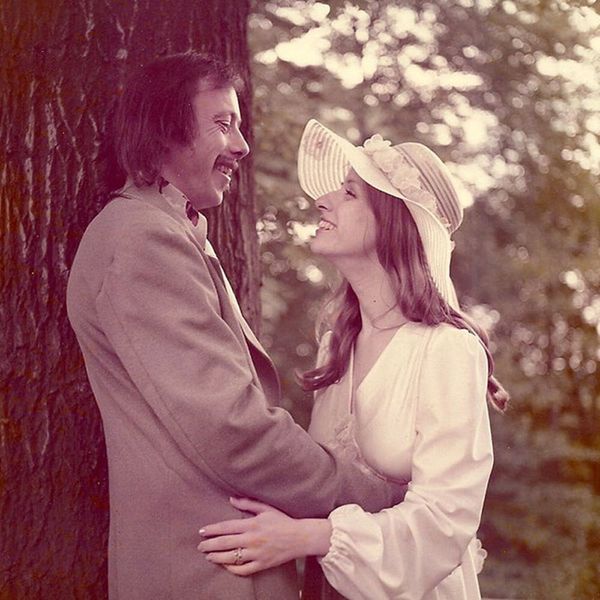 Just like creativity, love never fades. Romance can lead to memorable + touching proposal videos, unique wedding photo series and even one-of-a-kind anniversary gifts. It can also result in recreating your wedding day photos 40 years after that special day, which is exactly what one couple did. You know we’re suckers for a creative photo shoot, especially when it provides plenty of inspo. These snaps provide both.

Jay Johnson, who’s known as magic975 on Reddit, uploaded photos of his parents to the social network to celebrate their 40th wedding anniversary. You’d think being together for four decades was enough of a milestone to commemorate, but the clever couple took that celebration up a notch by redoing a couple of shots from their wedding day, and they are perfect recreations.

Posing just like they did back in 1975, the 2015 photos feature Jay’s parents sitting on a motorcycle (okay, the ’15 version is a definite upgrade) and posing next to a tree madly in love. To keep perfect consistency from ’75-’15, the bride wore the same wedding dress she exchanged vows in and the groom threw on the jacket his bride made for him for their big day. What a D-I-Bride — our kinda gal!

Like we said, creativity + love never fades. And neither do outlets for inspiration. <3

Have you taken any anniversary pictures that are as creative as these? Share them with us in the comments.