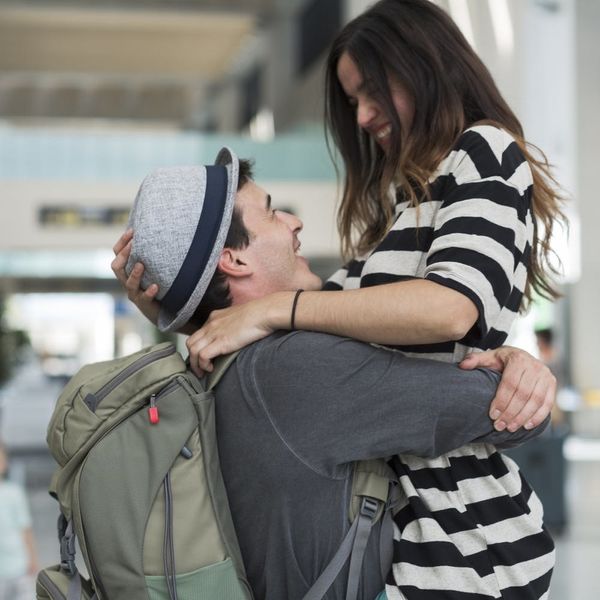 Thanks to technology, it’s easier than ever to stay connected to an S.O., no matter where you are. It might even be how you meet them in the first place. And yet, you still hear the same advice any time you bring up the idea of dating someone long-distance: “Don’t do it.”

Sure, a long-distance relationship means you might miss out on an extra-creative last-minute date night (adorable), or evenings where you stay in making each other romantic home-cooked meals (double adorable). But, according to dating and relationships coach Lindsay Chrisler, you shouldn’t be afraid to go for it just because it’s a challenge.

“Falling in love doesn’t happen every day, so if you meet someone who you see potential with, don’t write them off because they live far away,” she says. “I hate 100 percent black-and-white advice about love, because you have so many options to make it work.” (And for the record, she’s done long-distance successfully herself.)

In fact, Lindsay says there’s a key advantage that long-distance couples have over everyone else: You have no choice but to keep your own lives. “The natural instinct for everybody when they fall in love is to consume the other person and share one life,” she says. So, if there’s literally already space between you, you’re less likely to fall into that love buzz-killing trap.

The fun, warm-and-fuzzy, totally-crazy-about-this-person phase of the relationship also has the potential to stay turned on longer. “When you’re living together [or in the same city], you see each other by default, and there’s not as much choosing or desire there because they’re always around,” says Lindsay. But with long-distance, you actively have to tell them you miss them and care about them, and work more to connect. “The relationship actually gets more intimate, and you get to know each other in a different way,” she explains. But how do you make it last?

How to Make Long-Distance Relationships Work

1. You better both love talking. Lindsay says one of the biggest keys to a long-distance relationship is communication… literally. “If the chemistry is amazing, that’s great, but can this person talk? Because you’re not going to have physical intimacy and touch, you’re going to need communication, either verbal or written or Facetime.”

Of course, you can also go for some more unconventional date ideas beyond just long conversations. Lindsay suggests writing letters or watching movies together over Skype. But you might not even feel the need to get that creative. “Long-distance is really so romantic,” she says.

2. Be self-aware, and manage your own emotions. Long-distance relationships can come with a lot of anxiety and loneliness. “You want to have something to help you manage those feelings of fear,” Lindsay advises. It’s not fair to put all that on your S.O., but you don’t have to do it alone. She suggests turning to friends, therapists or professionals (like, say, your friendly neighborhood relationships expert) for support.

3. Never fight over text. It’s so easy to misconstrue meaning over text message or be accidentally passive-aggressive. “You’re going to be so reliant on texting, but everyone’s got to be really self-aware of how they’re feeling and how they’re doing, and be open,” says Lindsay. If you’re feeling lonely and not talking about it, that might come out in weird, mean ways that lead to a fight. Instead, talk about what you’re actually feeling — which is probably lonely and scared of being apart.

If you start to feel that happening, immediately stop texting and move the conversation to Facetime or Skype. “When you’re ‘in-person’ everything gets more present in reality and real,” says Lindsay. “You can go into your head for a long, long time when they’re not right there, and that’s the biggest trouble spot — being way too in your own head, and not actually in the relationship.” Also: Drunk texts can be just as damaging as they are when you’re single. Just don’t do it.

4. When you do get to spend time together, it’s still OK to take breaks. And don’t feel bad about it. They might need a break from being cooped up with you more than usual too. “There’s all this pressure to spend every moment together if you’re seeing each other just for the weekend, but if you’re feeling overwhelmed or irritable, go take space,” says Lindsay. “Go for a walk, see a friend, touch back to your old life. That space will allow the relationship to stay good, and you need to take it even if the time is limited.”

5. Know when to commit. “This is hard with any couple,” Lindsay admits. “The three-month mark, when there is a deeper commitment starting to be asked for, that’s when fears start setting in, and the realities set in of the things you might not like about the other person that you’re either going to have to accept, or let them go.” When it’s long-distance, it might take longer to get there (even as long as a year), but don’t shy away from the conversation if you’re feeling it. “Be really honest with each other and put it out on the table, and see if you’re on the same page. The key point is to keep telling each other the truth,” Lindsay stresses. And she also points out that emotional openness and honesty in a relationship isn’t usually something you’re taught; you have to learn by doing it.

6. Don’t rush into big changes. Committing to each other doesn’t mean you both have to move to the same city ASAP and start living together. “It’s a transition, so it’s going to be awkward and weird. That’s normal,” Lindsay assures us. “I like the idea of thinking of it as an experiment. Like, decide to live in the same city for three months, and see how that goes. And then if that feels good, move in together, and so on.” It can be scary to uproot your life or ask someone to uproot theirs, but making or giving into hard demands about where to take the relationship next isn’t going to help. “Everyone wants a guarantee, but there is no guarantee,” she says. “Take the next phases one step at a time. You get information every step of the way, and deal with more fear every step of the way, but they build on each other for a really great relationship if you go slow and stay honest with each other.”

And if after all that, you’re still on the fence? Lindsay’s got your back. You can schedule a free video consultation to get her take and support on your specific situation.

How do you make long-distance relationships work? Tweet us your tips @BritandCo!