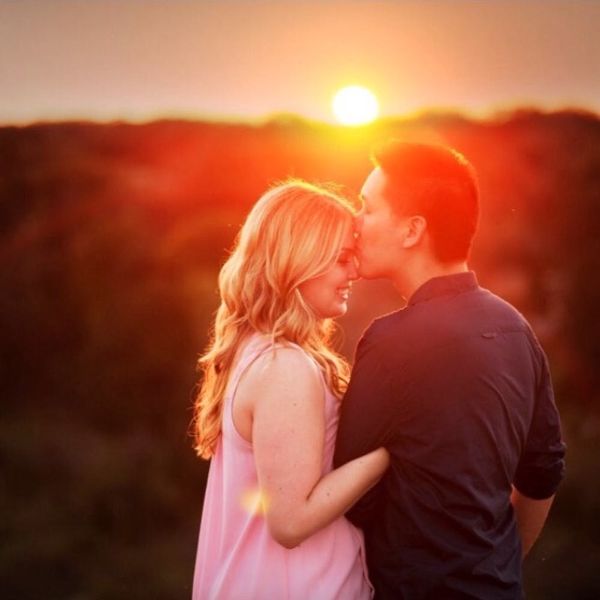 A lot of us love technology, and for good reason — it makes our lives easier, connects us with friends near and far and entertains us to no end (as soon as I’m allowed to marry my iPhone, it’s happening). Online dating is the perfect marriage — excuse the pun — of technology and romance. Back in 1995, only 14 percent of single American adults had Internet — much less dating profiles. These days, according to an April 2015 study, “nearly nine-in-ten Americans are online.” That’s a pretty impressive change in 20 years. Over the years, any stigma of saying, “we met online” has evaporated. C’mon, that’s sooooo 1995. Valentine’s Day is coming up fast, and it has us in a romantic kind of mood, so we spoke to five awesome couples who met each other online and got hitched (or are engaged to get hitched) IRL. Read on for some heart-meltingly sweet stories.

Dana: “My now-husband Darren and I met on Tumblr in March 2011 and have been married since September 2013. I was nervous to meet him, but not necessarily because he was from the Internet. I’ve made a lot of really good friends from different sites on the Internet, going back to my high school and college days. It’s something that I used to be really embarrassed to admit to people, because meeting people on the Internet seems like a weird, scary thing to a lot of people! I think the stigma on that has changed some, as people connect with others more and more via the Internet. But a few years ago, it was a weird thing for sure. When we tell our story, especially to older family members, we often just say that we met ‘through friends,’ which is kind of true! It’s easier than explaining how we met on the Internet, and not through a dating site or anything.

We’d been following each other for a while, and had chatted on Tumblr before because we had a lot of similar interests — mostly obscure horror movies, which really brought us together. I was living in Brooklyn at the time, and Darren was in Oakland, but he had friends who lived in NY, so when he was coming to visit them, he told me he would be in town, and asked if I’d like to meet up! We decided to meet at a midnight movie at Spectacle Theater in Williamsburg (basically the most obscure thing we could do). We saw the movie, stayed at a bar talking until closing time, and that was really that! We decided quickly after that night that we wanted to be together, and within a few months Darren had moved across the country to New York!”

Brendan: “We’ve been together six years and had gone on countless online dates before we met each other. We were both attracted to each other through pictures. We had very minimal info in our profiles. We spoke through email for about a month before meeting in person. Although it was not popular at the time, we were honest that we met online. Now we have no reservations about how we met. Being pioneers is fun! The stigma has definitely changed very quickly due to apps like Tinder. Other members of my family have met their spouses online too. We fell in love over our want for a life partner and our enthusiasm for living life in the most exciting ways possible.”

Brian: “My wife and I met on eHarmony in August 2013 and we had our first child January of 2016. We’re both nurses, but in different fields and hospital networks. She’s a bariatric nurse manager. I’m a pediatric critical care nurse. She’s from rural Kansas (graduating high school class of 30), and I’m from Dallas suburbia (graduating high school class of 1400). I think I might still have some of our first emails. She was about to give up on eHarmony and I thought she was out of my league, but I tried anyway. We got engaged April 2014 and married November 2014. Funny enough, a few hours after we got engaged and were headed to our engagement party, a person she once dated on eHarmony called her to see if she wanted to go out.”

Carrie: “I never would have met Brian if not for eHarmony. I am certain our paths never would have crossed. I thank God for that website. Meeting him was worth every terrible date I ever went on — and I’ve been on a lot!”

Lauren: “So online dating for me has actually been going on for awhile. I started chatting and ‘dating’ online when I was 13. I was gay and just trying to figure that out, and the easiest place to do that in a small town was to use the Internet. Now, online ‘dating’ back then was not the same as today. You were literally ‘dating’ online, people that were hundreds, sometimes a thousands, miles away. Sure, there were phone conversations, but other than that it was purely just online. I think that may be where the stigma comes from… Now it’s, look at someone’s profile, write them a message, have a conversation for a day or two, then go out for a drink. We are actually meeting people out, taking the time to know them in person, and determining from there if this will go any further. I think online dating is easier then going out to a bar and trying to pick someone up… I also guarantee the ratio of bad dates online, and bad dates meeting someone out is pretty similar. (I think there should be a study done on that.) Really I think people are afraid to put themselves out there in such a public world, photos, profile… it’s personal, and I get that, but at the end of the day because I did that I met someone I am going to spend the rest of my life with. I would take 25 bad online dates just to get to that great one again.

Olivia contacted me first — I didn’t see her profile while browsing. When I clicked through, the first thing I looked at was her pictures, which were perfect. There were the very put-together pretty ones, and then there were the goofy ones. I liked that right away, that she didn’t just put the “perfect” photo up. Made me think she was putting her authentic self out there. When I read her profile that was also the impression I got. It was a nice mix of ‘here are my skills and talents’ but also ‘I have some neurotic tendencies and I’m not perfect.’

We had a seriously epic first date. The story goes like this: I was running incredibly late, 45 minutes to be exact, she was waiting for me at a bar in Brooklyn, girl after girl was asking to buy her a drink, and she turned down everyone. She waited for me, and from that day forward I have made sure to make it up to her. It was that six-month to a year mark where I really feel like we saw the balance we created with each other. We were always looking for fun and always doing spontaneous things together. I could have asked her to marry me after that first year, but I was still struggling with the job I had at the time and wanted to make sure I could support us both, and get a really good ring. That happened at the three year mark, I bought the ring, and I asked her on her birthday (Nov 23, 2012) in my home town of Syracuse, NY. It was a nice private proposal while we were laying down to go to bed. It has to do with earplugs, but that makes this story even longer. She said yes! We had a two-year engagement, and got married October 18, 2014 (a day before my birthday) on a farm venue in Catskill, NY. It was a beautiful fall wedding, and all our family and friends attended. It was the perfect day, and everyone still talks about how much fun they had.”

Wynn: “We both went on about 15 to 20 online first dates over a number of years from a variety of sources, including OkCupid, Coffee Meets Bagel, Tinder and, obviously, Hinge. Hinge works in such a way that it only connects you to people in your extended Facebook friend network, and so I was immediately struck by the large number of third-degree connections we had (over 50!) from nearly every chapter of my life. That alone made Adam stand out. But also, a picture of him with the Obamas raised my eyebrow. And his succinctly written profile (funny, smart and serious when it counts) sealed the deal. We never had a cover story, and in fact, were quick to tell people we met on a new-fangled ‘dating application’ that is a more wholesome version of Tinder.”

Adam: “Her profile may have been more economical in its use of descriptive language than my own, but the number and diversity of the Facebook connections we shared really said it all. More importantly, once we started chatting I was struck by something intangible in her writing style. The details must seem mundane to everyone else, but her voice came through loud and clear, and I couldn’t wait to meet her in real life.”

Wynn: “I think online dating has become so incredibly common that the stigma that existed a decade ago isn’t there anymore. Every person I know that has been single for some period of time in the last five years has used either a dating site or a dating app. Apps like Tinder and Hinge make dating so easy that I think it’s more peculiar if you’re single and you want to be in a relationship, but you aren’t using one. One other reason Adam likes to underscore how we met is, truthfully, we spent years living a few blocks apart, going to the same grocery stores, attending the same shows, going to the same bars and restaurants, and somehow never met. It took a dating app to bring us together, and we’re so happy to have found each other — why not be open about it?

Our first date was happy hour cocktail that turned into a pizza — and Adam showing up very late and very full to dinner he had already planned with friends. Scheduling logistics dictated that our second date be the very next night. Adam pulled out all of the stops and executed a perfectly planned evening — a fancy dinner at the newest hip restaurant in town, followed by the best worst karaoke bar. I have been smitten ever since. Adam proposed on August 1, 2015 and we’re getting married on August 26, 2016!”

From Your Site Articles
Kimberly Wang
Kimberly Wang writes about all things pop culture, tech, style, and beauty. She's a Bay Area transplant and has an MFA in Creative Writing from Columbia University. On a sunny New York day, you can find her hanging out with her mini schnauzer Isabelle Jellybean on a blanket in Central Park.
Dating
Relationships
Dating love Valentines Day