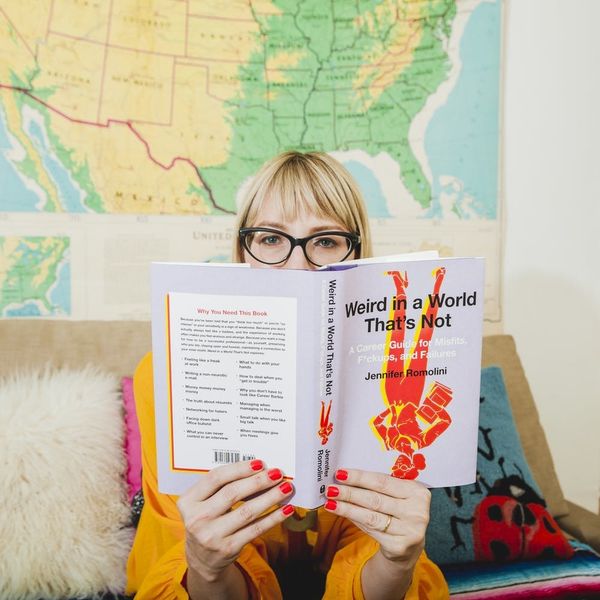 Making your way in the crazy career world is hard enough when you totally have all your ish together, but it’s even harder when you’re weird. You know who you are; interviews give you the cold sweats, presentations make you feel like a poser, and trying to please your new demanding boss makes you want to hide in the ladies room. We know, because we’ve all been there too.

Thankfully, Jennifer Romolini, Editor-in-Chief of Shondaland and former EIC of Hello Giggles, is here to give us weirdos the real talk we need to get through it all. Her new book, Weird in a World That’s Not: A Career Guide for Misfits, F*ckups, and Failures, is just what it claims. Part memoir, part career manual, Romolini delivers fantastic but raw advice from someone who took a totally non-traditional way up, written in the voice of a hilarious, wiser, more experienced BFF.

Romolini’s amazing journey from grade-school outcast and college dropout to angry workplace climber and successful leader will totally inspire anyone, from the gal just starting out to the seasoned vet who still struggles with managing a team. Her book reads more like a dishing session over drinks, filled with a mix of candid confessionals and tough advice. By the end, you’ll wish she was your mentor.

Brit + Co: What inspired you to write a career-advice book?

Jennifer Romolini: I didn’t have a conventional path career-wise. I dropped out of college, didn’t start working in offices until I was in my late 20s and, once I got there, it’s not like it all fell into place: I was not slick or polished, I had no pedigree or connections, I felt out of step, anxious, and clumsy — I often still do. But I kept going, kept climbing some kind of career ladder/jungle gym, whatever we’re calling it. I made it, in some ways, despite myself. And I wanted to write a non-posturing, no-bullshit guide that both acknowledged how everything felt like trash and told young women like me: You can do this. It doesn’t matter how weird or fucked up you feel. You are not excluded from the success club.

JR: I think when you’re weird, there’s this sense early on that you’re wired differently, you like things that other kids don’t get, you react to things in ways the people around you don’t. I see it in my seven-year-old daughter — who is wonderfully weird — she’s interested in idioms and puns, wants to dress in medieval garb, and really does not understand why other kids her age don’t want to talk about the Titanic. I wrote this book for girls like her, for the hyper-emotional and sensitive, for the women who’ve been told they “think too much” or they’re “so intense.” I wrote it for the criers, the blushers, the ones who are cranky and pissed off all the time, those who are emotionally and physically clumsy, who feel too raw for this world.

There are all kinds of weird, but the thing we all have in common is feeling different and feeling lonely in this difference. But we’re not alone. There are so many of us! I hope, if nothing else, this book helps weirdos feel seen.

B+C: What’s the one big career thing that weirdos struggle with most?

JR: I think we get in our own way. We imagine problems that don’t exist. We project our feelings of inadequacy onto other people, fixate on possible shade, thought police our bosses, spiral out of control emotionally, waste a lot of time in the process. It’s taken me a very long time to differentiate the reality in my head from, um, actual reality, but it’s been key to my feeling present enough to actually do my jobs.

B+C: And what would you say weirdos are gifted at?

JR: Being sensitive and weird usually makes you highly attuned to what’s happening around you. It makes you able to read a room and thoughtfully communicate your ideas so you’re actually heard, which is a skill that many people do not have (*cough cough* mediocre white men). It usually makes you a person with a giant imagination who can think up all kinds of unique solutions/strategies to make daily projects/office life better. You add that to working hard, being open to feedback, and the self-assurance that you belong (because you do! You belong anywhere you want to be!), and you’ll be unstoppable.

B+C: I love your advice about not faking it, since authenticity is always the most winning trait. But when I was young, I sometimes didn’t even realize how badly I was faking it. I look back now and cringe. How do you call yourself on your own BS?

JR: This came up for me a lot when I was writing the book. I would come to a section that just wasn’t working and no matter what I did, I couldn’t fix it. Nearly every time the problem was the same: I wasn’t being honest, I was trying on some posture in my writing and advice to make me seem cooler than I am, I was trying to sound like what I thought a “successful lady” should sound like — more self-assured, or so I seemed more like a hero, not like the shithead I sometimes was. Every time this happened, I asked myself “What I am most afraid to admit?” and wrote down the thing that made me feel most terrified to own (examples include: that I was not smart enough, that I was not cool, that my ego and insecurity had caused me to behave monstrously or selfishly and do harm to someone else). When I exposed what made me most afraid, the writing got better and I felt this deep calm and relief. I have many not-so-wonderful qualities, I don’t know everything, I am not always the best: Once you stop running from yourself, you don’t have to fake anymore, and you’re better equipped to deal with the mess.

B+C: A lot has been made of the super-confident “girlboss” way of working your way up the ladder in the workplace. What would you say is the difference between your book and these other “bossy” books?

JR: I think a lot of career advice is stoic and contained, delivered in shiny platitudes and inspiring aphorisms/anecdotes/quotes. Or it’s super cool, it Wonder Woman poses, it struts around with attitude and swagger. I respect all of those bossy books and, even more, the women who wrote them, but I wanted to show a different model for success, one that was not polished and poised and was instead highly emotional and sometimes had stains on its pants. I wanted to talk about how intimate work can be and the silly, clumsy things that can trip you up. I am a boss, but I am not a #bawse and I was never going to be one, and I felt like there should be a book for people like me.

B+C: One of your biggest pieces of advice you gave prospective managers was learning how to deliver tough feedback. What’s your advice to the girl who wants to be a boss but is timid and hates conflict?

JR: Suck it up. You cannot get through managing by hiding. Unaddressed, most employee problems will fester and grow worse in terrible ways you cannot even imagine. By investing in minor conflict now, by being honest and giving constructive criticism, you are saving future you heaps of trouble down the road.

B+C: You talk about mentors being important in your life through the years. Do you think mentors are like soul mates that you find magically very occasionally? Or can you make a mentor out of someone you admire who’s super smart?

JR: I think we should take the pressure off ourselves to have “mentors” in any formal way. We’ve fetishized mentorship to the degree that now if you don’t have one, you feel bad about yourself, which is really just a bunch of BS. Seek out people who professionally inspire you, ask them questions, ask for advice — if a person you barely know gives you one great piece of advice, that’s mentorship. You’ll learn the most from people you have great chemistry with and genuine affection for — like any relationship, you can’t force that, but you can be open to it when it comes your way.

Do you feel like you’re a weirdo in a “professional lady” world? Tell us your favorite career advice on Twitter @BritandCo!

From Your Site Articles
Annette Cardwell
Annette is the VP of Editorial at Brit + Co. She's a mom of two, a huge girl geek and gamer, a TV snob, and a wannabe chef.
Books
Work
Books Girlboss interview work