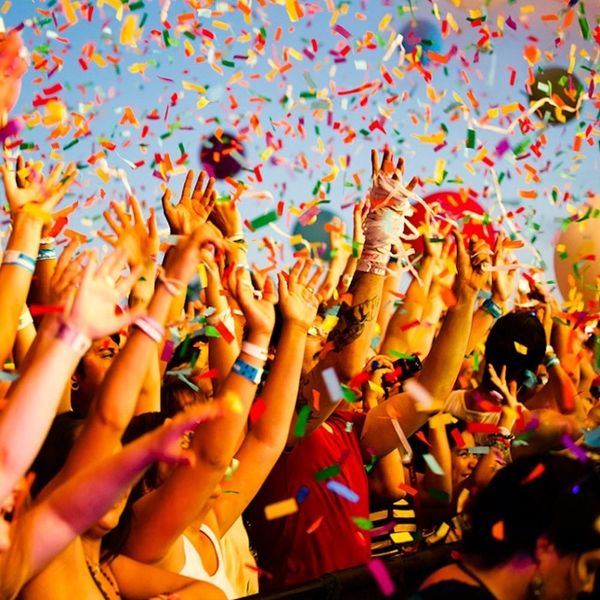 We’re swinging (and dancin’) into festival season like any good music addict would by taking awesome recommendations from our fellow music-loving friends, aka you. After sharing 16 can’t-miss music festivals, we’ve got 11 more with your stamp of approval. These concerts will definitely give Coachella a run for its money. With so much music and so little time, can it just be summer already? Until then, we’ll be practicing our moves, choosing our outfits and stocking up on stylish speakers.

1. Wanee Festival (Live Oak, FL, April 16-18): Celebrating its 10th year of cool tunes, this festival even has a pre-party the night before the acts officially kick off, with happy hour included. This year, you’ll be able to catch the likes of Widespread Panic and Earth, Wind + Fire. A three-day pass is $205 and includes camping. (Photo via Live for Live Music)

2. SunFest (West Palm Beach, FL, April 29-May 3): Music on the beach just can’t be beat. Especially when it involves seeing Fall Out Boy, Lenny Kravitz, Hozier and more. Take your pick from a single-day pass ($40), two-day pass ($60) or five-day pass ($80). Advanced pricing is going strong until April 25, so tickets are even cheaper. (Photo via SunFest Photo Gallery)

3. Rocklahoma (Pryor, OK, May 22-24): To the people who love to rock and rock hard, this festival is definitely for you. Linkin Park, Godsmack and Slayer are just a few of the headlining acts. Need we say more? Rock on. Tickets start at $109. Head banging is totally encouraged. (Photo via @rocklahoma)

4. Boston Calling (Boston, MA, May 22-24): You can’t get more centrally located than City Hall Plaza in Boston. Lucky for you, this festival takes place there and delivers BIG on a variety of music. Beck? Check. St. Vincent? Oh yeah. TV on the Radio? They’ll be there too. Go one day ($50) or all three days ($175), it’s up to you. (Photo via Mike Diskin)

5. Free Press Summer Festival (Houston, TX, June 6-7): When’s the last time you saw R. Kelly singing about believing he could fly? This festival will take care of that lull. You’ll also get to catch Weezer, Skrillex, Ben Harper and more, all over the course of two days. Tickets start at $169. (Photo via Julian Bajsel)

6. 80/35 (Des Moines, IA, July 4-5): Downtown Des Moines, Iowa was never hip in the music scene until this festival showed up in 2008. Now nearly 35,000 music lovers flock to this festival. This year, Cake, Ziggy Marley, Xavier Rudd and more will dominate three stages over the course of two days. Single day tickets are $39, or two-day passes are $65. (Photo via Grow Your Flow)

7. Forecastle (Louisville, KY, July 17-19): Now in its thirteenth year, Forecastle has become the destination for great live music. Sam Smith, My Morning Jacket, Modest Mouse… the list goes on and on this year. Tickets start at $185. It’s a small price to pay for fun in the sun with your BFFs. (Photo via Festival Snobs)

9. FloydFest (Floyd, VA, July 22-26): Listening to Trampled by Turtles, Chris Robinson and The Devil Makes Three while nestled up in the Blue Ridge Mountains in Virginia… sign us up! This festival has been around for 13 years and is the perfect low-key event for people with an eclectic taste in music. Three-day passes start at $205, going up to a five-day pass with camping for $270. (Photo via Mountain Messenger)

10. Summer Meltdown (Darrington, WA, August 8-11): With 13 years under its belt, this biggest little festival in the northwest features breathtaking views, amazing live music and a weekend that can’t get any better. One-day passes start at $50. Want to be one with nature all weekend? Get a three-day pass that includes camping for $135. (Photo via Summer Meltdown Photo Gallery)

11. Bumbershoot (Seattle, WA, September 4-7): While the lineup has yet to be announced, this international music and arts festival has the best backdrop ever: the Seattle skyline. Enjoy Labor Day weekend the way it was meant to be enjoyed — with live music. Ticket prices TBA. (Photo via Bumbershoot)

Which festival — or should we say festivals — will you be be hitting up with your BFFs? Tell us in the comments below.

Britt Feder
Britt has a severe nail polish addiction (she owns 50+ shades). When this Midwestern gal/Oakland resident isn't painting her nails, she can be found reading a good book in the sun or enjoying a glass of champagne… bubbly doesn't need a special occasion to make you feel fancy.
Camping
Music
Camping Music road trip