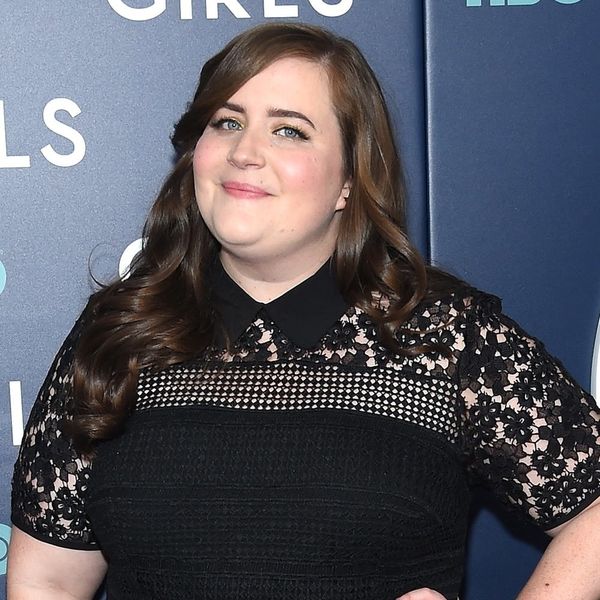 Aidy Bryant is a married woman! The Saturday Night Live star announced the news via Instagram on Monday, April 30, by posting a photo of herself walking down the aisle with her love of nine years, Conner O’Malley.

Bryant looked absolutely stunning in what appears to be a lace, tea-length dress with long sleeves. Her intricate bouquet of flowers matched her fuschia Prada shoes, adding the perfect pop of color, and she wore her long hair in loose waves. O’Malley, meanwhile, wore a blue suit with a light-blue tie and brown shoes.

The ceremony appears to have taken place in an intimate space with brick walls and a black-and-white tiled floor. It’s hard to make out any faces in the crowd, but according to People, Bryant’s SNL costars Mike O’Brien, Kate McKinnon, and Michael Che were among the guests.

O’Malley proposed in late 2016, but Bryant didn’t share her happy news until April 2017, when she opened up about her then-fiancé’s proposal on Late Night With Seth Meyers. “Basically, the second I shut the door, a man — who I discovered was Connor — frantically came around the corner and was just like, ‘Will you marry me?!’ No box. No ‘I love you,'” she recalled, adding that she thought it was a joke at first.

Bryant has been a cast member on SNL since 2012. She was promoted to a repertory player during her second season and has since played celebs including Adele, Rebel Wilson, and Roseanne Barr.

But on her wedding day, she was 100 percent herself.

Did you have (or do you want) an intimate wedding or something bigger? Let us know @BritandCo!

Desiree O
Desirée O is a ‘Professional Bohemian’ who loves anything and everything related to the arts, entertainment, and pop culture. She ADORES being a ‘Newsy’ for Brit + Co, covering all of the latest tidbits of awesomeness that you want to read about. When she’s not writing, she’s either making messy art, going on long adventurous walks with her camera, or poking around over at bohemianizm (http://www.bohemianizm.com/). You can find out about Desirée O and her work at http://DesireeO.com/ or follow her on Twitter @DesireeO.
Celebrity Couples
Celebrity News
Celebrity Couples Celebrity Wedding