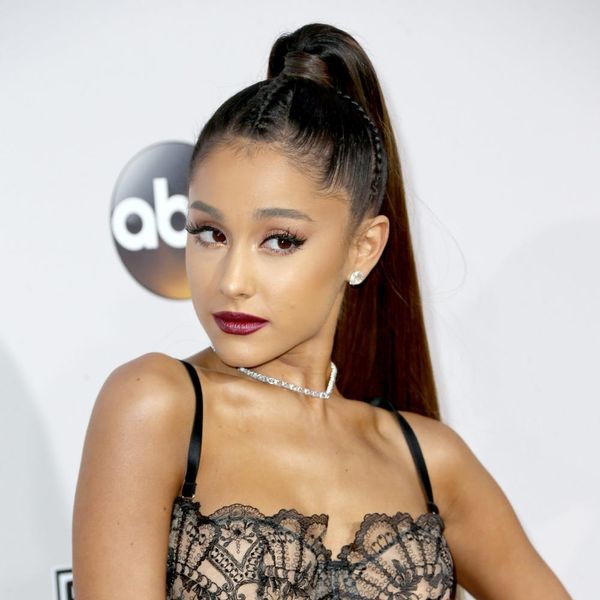 If there’s anything we immediately identify with Ariana Grande, it’s either her incredible voice (obvs!) or her super sleek, deep brunette high ponytail — we’d probably have to opt for both, TBH. But now she’s thrown us completely for a loop by drastically changing up her signature look. Ariana has gone platinum blonde, and you won’t believe her transformation.

Though this isn’t the first time the “Into You” singer has lightened her locks, that doesn’t mean we’re not wildly surprised to see her slaying the blonde look. Appearing in the video for Stevie Wonder’s “Faith,” Ariana struts through the streets swinging her famous ponytail.

But instead of chestnut locks waving in the wind, she’s flipping a much lighter mane around her shoulders. With deep dark roots cropping up around her hairline, she was either already set to grow this shade out or is wearing a wig that’s aiming for a very specific look.

Take a peek at the vid and decide what you think for yourself about Ariana’s new color.

What do you think about Ariana Grande with platinum blonde hair? Tweet us @BritandCo!

Desiree O
Desirée O is a ‘Professional Bohemian’ who loves anything and everything related to the arts, entertainment, and pop culture. She ADORES being a ‘Newsy’ for Brit + Co, covering all of the latest tidbits of awesomeness that you want to read about. When she’s not writing, she’s either making messy art, going on long adventurous walks with her camera, or poking around over at bohemianizm (http://www.bohemianizm.com/). You can find out about Desirée O and her work at http://DesireeO.com/ or follow her on Twitter @DesireeO.
Celebrity Hair
Celebrity News
Celebrity Hair