Letter the Days Away With These Daily Hand-Lettered Creations 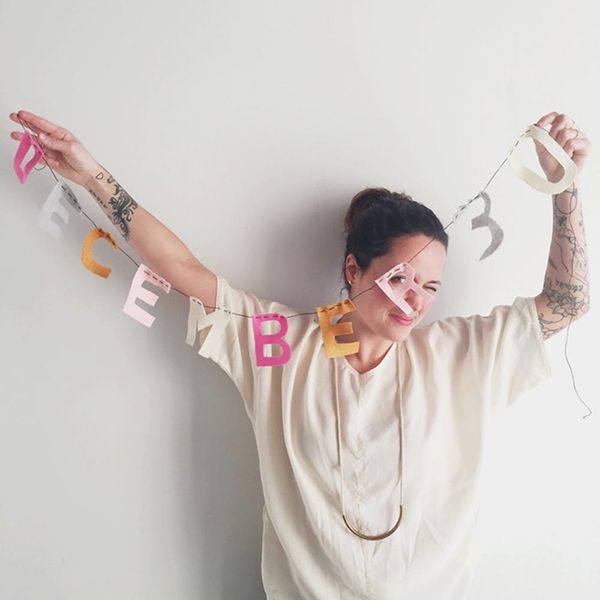 It’s always frustrating when you’re scouting the calendar rack for a stylish 365 day companion but all you find are the cheesy puppy or One Direction daily tear-offs. Last year Minneapolis-based creative Ashley Barlow took matters into her own creative hands and began a campaign to make her own calendar. The series, Lettering the Days, may have been made in 2014, but you can totally use it throughout 2015 (and ’16, ’17, ’18…).

We talked to Ashley about her process and are officially dubbing her our #MakerCrush this Monday. Keep reading and get ready to fall for her too.

The multi-disciplined artist — she’s a graphic designer, illustrator and mixed-artist — came up with the series organically as she was beginning to learn about (and fall in love with) hand-lettering as a design medium in the fall of 2013. Wanting to dive deeper into the art and inspired by Sabrina Smelko’s 365 project, Ashley decided to make a New Year’s resolution to create a lettered version of every day in 2014 (she’s obsessed with making New Year’s resolutions, btw).

By taking on this daily challenge, Ashley was confident she would be constantly forced to produce pieces when time and resources were limited, enabling her to expand her skills through working with new mediums. Ashley wanted to tackle such a large project because she felt people would connect with it, since everyone has dates throughout their lives that mean something to them.

Each day in the Lettering the Days project always began with Ashley’s hands. The one rule she stuck with from the beginning of the project was to never begin designing in a digital space. She typically would begin by finding inspiration through searching the Internet (in places like Pinterest and Designspiration), scrolling through Instagram, opening one of her many hand-lettering books, exploring the outdoors or even just remembering it was a holiday.

If all those outlets failed to give her any inspo, she would just stand in her studio and stare at her supplies until something came to her (as homemakers, we know the feeling, girl).

After an idea came to her, the pen and paper would come out to start the day’s creation. Though her go-to is a brush pen and paper, she also used watercolors, acrylics, ink and many more mediums by the end of the year. Then, if the piece required additional work, Ashley would scan it and edit it digitally on Photoshop or Illustrator. After the work was completed, she would shoot it with the most amount of clean white space as possible and in the most natural light she could find — but would typically edit the shot with After Light on her phone or Photoshop.

Though the process may sound time consuming, this busy gal (who spends her days as an illustrator and designer at a creative agency called Knock and its sister company Treat and Co.) says the average time for each piece was only 15 to 20 minutes. Ashley’s birthday creation and New Year’s Eve design took the cake for longest though, clocking in at almost three hours (darn you, paper art and glitter!).

Want to learn even more about the Lettering the Days series? Check out Ashley’s own recap post where she’s got plenty of cool stories — like the day she thought of a really good idea after she already completed the day’s creation (bummer!).

While Ashley will not be doing another Lettering the Days series this year, she will still be keeping the creativity coming as she plans on doing a new project every month — hmm, sounds like something we could get down with ;) January is all about exploring and playing with minimal geometric vector illustrations; they’re already pretty eye-catching (check ’em out on her Instagram).

Has the Lettering the Days series inspired you to tackle a daily (or monthly) project? Let us know in the comments.