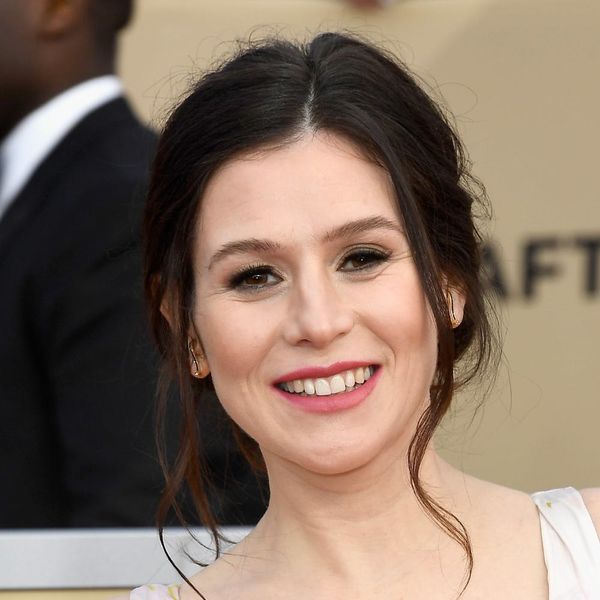 There were SO many amazing style statements at last night’s 2018 SAG Awards, from the millennial pink gowns (potentially inspired by the Women’s Marches) to Allison Williams’ ’20s inspired flapper look, leaving no shortage of stunning fashion to behold. Our favorite accessory of the night, however, belonged to the sea of baby bumps that ruled the carpet.

After announcing that his fiancée Caitlin McHugh was pregnant last month, proud dad-to-be John Stamos couldn’t help but shower his bride-to-be’s belly with love and affection as they posed for photographers at last night’s ceremony.

The model debuted her bump in a sexy low-cut black gown, wearing her hair in loose, voluminous waves. She kept her accessories minimal (save, of course, for that gorgeous engagement ring from her fiancé!) with black sandals and diamond earrings, topping the look off with a beaming smile as she and the Fuller House star told reporters how excited they are to welcome their first child later this year.

To celebrate the nominations of two of her Orange Is the New Black castmates, Yael Stone (AKA Lorna Morello) also debuted her baby bump in the chicest way, cradling her bump in a yellow and white Cynthia Rowley gown, Sam Edelman shoes, an Edie Parker clutch, and jewels by Anita Ko and Selin Kent. She pulled her hair back in a loose chignon, keeping her makeup light with a poppy pink lip.

Stone announced last November that she was expecting her first child with partner Jack Manning Bancroft. Her OITNB character is also pregnant — coincidence?

Last but certainly not least was Australian actor Jason Clarke’s longtime love, French actress Cécile Breccia, who announced both that she was expecting her second child AND that the couple is married on the SAG carpet!

The Mudbound actor looked over the moon as he showed off Breccia’s growing bump, beautifully displayed in a long-sleeved, low-cut sheer silver embellished gown we’re STILL swooning over. The model wore her hair in long loose waves, adding black pumps and a black clutch to finish off her stunning sheer gown.

What a bunch of gorgeous mamas-to-be!

Which bumpin’ style statement was your favorite of the night? Share over @BritandCo.

Arielle Tschinkel
Arielle Tschinkel is a pop culture junkie who went to NYU because the Olsen twins went to NYU (really). She is a freelance writer whose work has also been featured on HelloGiggles, Refinery29, SheKnows, Bustle, Hollywood.com, and many others; and she's living her dream one Britney Spears GIF at a time. Follow her on Twitter @mrstschinkel or visit her website at arielletschinkel.com.
Celebrities
Red Carpet
Celebrities Celebrity Baby Celebrity Couples Celebrity Style love Red Carpet SAG Awards
More From Red Carpet