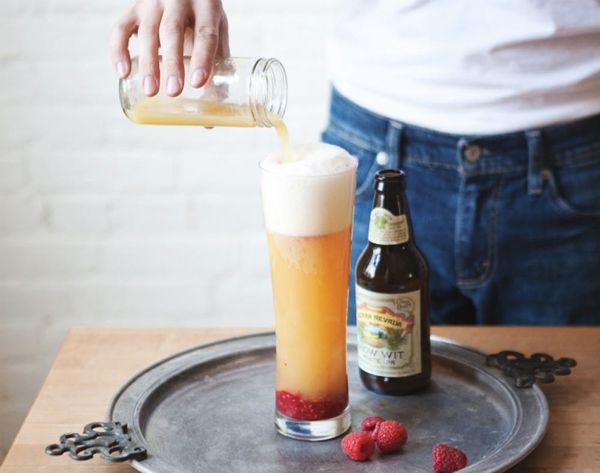 Sure, there’s a time and place for sipping on straight-up beer, but sometimes you want more than just a plain old bottle of suds. For those occasions, go ahead and transform your favorite brew into one of these 16 refreshing beer cocktails. While you’re at it, whip up a batch of beer bread and one of these beer-spiked main courses to make a whole meal out of a single six-pack. Bottoms up!

1. Lemon Shandy: What better way to start things off than with a classic beer cocktail, the shandy? A DIY lemon concentrate in this version upgrades the usual lemonade to create a full-flavored sip. (via Adventures in Making)

3. Michelada: Take your bloody Mary game in a new direction with a glass of this spicy Mexican lager and lime beverage. (via Chez Catey Lou)

4. Grapefruit Beer Bellini: Fresh grapefruit puree, grapefruit-flavored beer and Prosecco come together with just a spoonful of sugar to create this terrific brunch cocktail. (via Mantitlement)

5. White IPA and Raspberry Beermosa: A cross between a hoppy IPA and a light and refreshing wheat beer, white IPA works beautifully with muddled raspberries and a float of OJ in this excellent brunch beverage.

6. Beer Sangria: Summer ale is enhanced by Pisco, peach nectar, lemon juice and simple syrup to form this sangria — a fantastic punch bowl contender for sure. (via The Beeroness)

8. The Cocky Rooster: Take your standard Michalada add a generous amount of Sriracha, a few dashes of Maggi sauce and a couple jalapeño slices and you get one spicy, savory sip! (via The Kitchn)

9. Cherry Beer Slushies: Kind of like a beer granita, your favorite wheat beer is enhanced by sweet cherry liquor and maraschino cherry juice and popped in the freezer. Simply stir it occasionally to form a refreshing fluffy slush. (via Perpetually Hungry)

10. Raspberry Beer Cocktail: This raspberry lemonade shandy gets an added boost to its proof courtesy of a generous splash of vodka. (via Pretty Plain Janes)

11. Pub Nog: This holiday season, give the spiced rum and bourbon a rest and try egg nog with a splash of beer instead! (via Parade)

12. Bad Idea: This refreshing margarita-meets-beer cooler is perfect for a hot summer evening. (via Supergolden Bakes)

13. Honey Basil Beer Julep: You need this recipe for a twist on the classic Derby Day cocktail! (via Beermixology)

14. Chocolate Stout Affogado: Enjoy this sweet, stout and chocolate liqueur sundae for dessert — it’s a cocktail you eat with a spoon. (via Katie At the Kitchen Door)

16. The Flying Tomato: PBR has never tasted this good! We first mixed up this cocktail during March Madness, but it’s truly a year ’round sipper. (via Brit + Co)

What kind of cocktails have you made with beer or do prefer a straight-up sip from the bottle? Let’s talk all about booze and microbrews in the comments below!

Heather Sage
Heather Sage is a gluten-free recipe developer and freelance writer living in Orlando by way of the Silicon Valley. When she isn’t playing around with alternative flours in the kitchen, she can be found tackling DIY projects around the house or exploring her neighborhood. Check out her gluten-free recipe blog, A Sage Amalgam.
Recipe Roundup
Cocktails
Recipe Roundup
The Conversation