17 Behind-the-Scenes Peeks at the VMAs 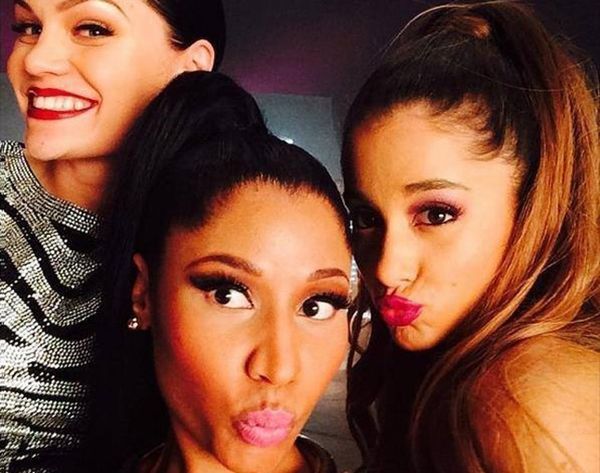 On this same night, many moonmans ago, Kanye stole the mic from a startled Taylor Swift. He didn’t even let her finish. And later, Miley danced with bears and a referee who looked like Robin Thicke. This year, who’s to say what will happen at the MTV Video Music Awards? Oh, you East Coasters already spoiler alerted the show for us here in PST. Thanks for the heads up that Beyoncé rules — we had no idea (jkkkk). While we were waiting patiently for our live streams to load, we were chillin’ with the stars backstage on Instagram, snacking and getting our hair and nails done. Take a look at how the stars prepped for the show below!

1. Lorde: The purple lip, you guys! Lorde is looking gothic fierce as usual in a corset number. Is that velvet? You’re a braver woman than us, Lorde. (via @lordemusic)

2. Jennifer Lopez: Has JLo aged a day since “Jenny From the Block?” We’re pretty sure she hasn’t. Alongside Liz Hernandez of Access Hollywood, she’s posing with the best of them in a glittery silver number highlighting her curves like only JLo can. (via @lizhernandez)

3. Beyoncé: The Queen herself greets her fans on the red carpet with open arms and a stunning gown. Only Bey can rock head-to-toe gothic, clingy, lacy black number in the LA summer and look absolutely flawless. (via @marisaiam)

5. Nina Dobrev: Nina Dobrev and her makeup artist for the evening Beau Nelson bring out the best pouts for a pre-show selfie. Those red lips are absolutely killer. (via @beau_nelson)

6. Uzo Aduba: The ladies of Orange Is the New Black do not miss a beat. Looking stylish and sassy as usual, Taylor Schilling, Uzo Aduba and Laverne Cox are repping the ladies of Litchfield at the VMAs a night before they’re celebrated at the Emmys. (via @uzoaduba)

7. Jessica Williams: Daily Show correspondent Jessica Williams stuns with an ultra-dramatic smokey eye on her way to the VMAs. What’s cooler is she took an Uber! Rideshares for the win. (via @msjwilly)

8. Kesha: Formerly Ke$ha, she dropped the “$” but not her knack for scandal. Her rainbow colored locks are kind of amazing, right? (via @iiswhoiis)

9. Lucy Hale: That is one seriously perfect pony. Actress/singer Lucy Hale was killing it on the red carpet this year and her hair choice was a perfect compliment to her ensemble. (via lucyhale)

10. MTV: This adorable pup Toast didn’t actually win a moonman, but we think he should go up against Miley for longest tongue. That’s moonman worthy, right? (via @MTV)

11. Jessi J, Nicki Minaj, Ariana Grande: These ladies sure know how to bring the BANG BANG. This practice performance pose had us waiting on pins and needles for their performances at the VMAs tonight. (via Perez Hilton)

12. Solange Knowles: Leave it Solange to rock red carpet in H&M like it belongs there. This shimmery sartorial look gives Solange the statement of class she deserves. (via saintrecords)

13. Becky Gomez: Smoochin’ it up with Ingrid Nilsen at preshow rehearsal, Becky is really killing it with that floral jersey! Where can we get one? (via @iambeckyg)

14. Sam Smith: We had a dream once that Sam Smith and Beyoncé met and became best friends and performed a show together. This is the first step, right? We have our fingers crossed. (via samsmithsworld)

15. Katie Stevens: We’re pretty sure that if we were going to the VMAs, we would pre-game with In N Out too. Gotta love a lady who loves a good burger. (via @thekatiestevens)

16. Katy Perry: When we saw this photo, we weren’t exactly sure what Katy had in mind for her always-anticipated show-stopper look. We never would have predicted a ’90s denim Brittany throwback. Way to go, girl. (via @katyperry)

17. Iggy Azalea and Rita Ora: These ladies have been performing “Black Widow” on tour together for a while and they’re bringing the A-Game right on to the VMAs. (via @ritaora)

18. Lady Gaga: Okay, okay. Gaga is not at the VMAs this year, but we miss her! She snapped this pic today looking like pure royalty and we couldn’t help but add her as a tribute. (via @ladygaga)

Were you tuning in? Let us know your fav VMA moments in the comments!

Katelan Cunningham
Katelan is a tech junkie obsessing over all things startup and design. She has entirely way too many apps on her phone and is no stranger to binge-watching. She accidentally fell in love in Los Angeles and that’s where she currently lives, writes, tweets and grams.
Beyonce
Fashion
Beyonce Dresses Miley Cyrus VMAs