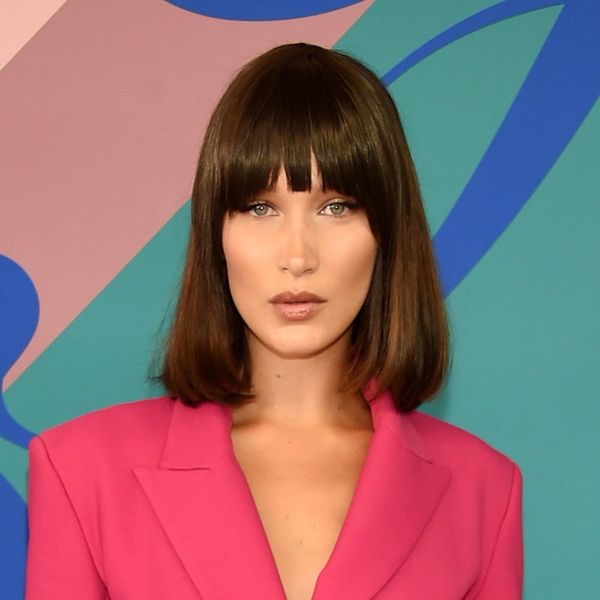 If you just couldn’t get enough of Bella Hadid in barely-there garb at the Victoria’s Secret Fashion Show last night (she only appeared a few times, after all) take note: the 21-year-old donned equally skimpy attire on a post-fashion show vacay in the Bahamas.

Bella Hadid knows there's nothing sexier than borrowing from the boys. https://t.co/5cyNWdxPnk

The younger Hadid sister, who took a page from pal Kylie Jenner’s risqué style book, rocked white sneakers, slouchy boyfriend jeans with gaping holes, and the teensiest crop top on the face of the planet (sans bra), which showed off juuust the right amount of underboob.

While the look isn’t exactly conservative, she balanced the barely-there tee with a baggy button-down blouse — which makes it somehow super chill. She’s on vacay after all!

The trip wasn’t all tiny tops and baggy jeans, though. Kendall Jenner and Hailey Baldwin were also on the beach excursion — reportedly to celebrate Baldwin’s 21st birthday — which, as you can imagine, required swimsuits galore! Hadid also shared some photos of herself lounging against a log in the blue waters wearing an itsy-bitsy, teeny-weeny, black-studded bikini (okay, okay, we know that’s not how the song goes).

We’d be lying if we said we weren’t feeling a bit of FOMO as we shiver at our desks, but all these skimpy outfits are making us wish for warm weather!

Would you wear a teeny tiny crop top a la Bella Hadid? Tweet us @BritandCo!