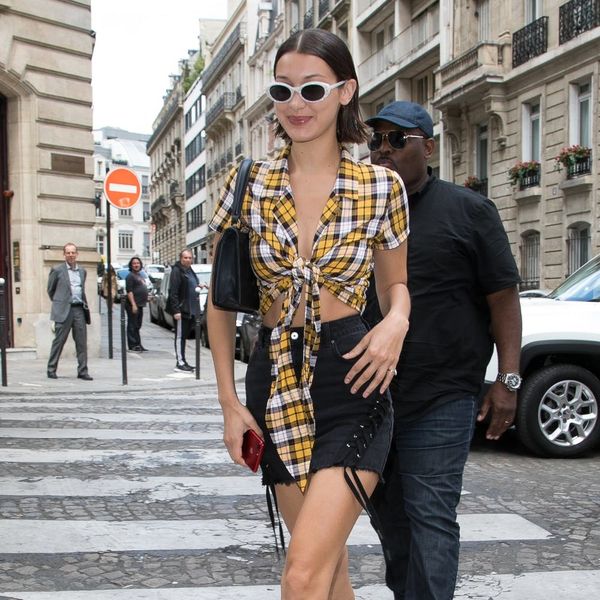 It’s not the first time and it certainly won’t be the last that Bella Hadid’s signature DGAF style makes headlines. No longer in the footsteps of older sister Gigi, this bona fide tastemaker continues to prove her sartorial prowess on and off the runway. Think: tracksuits by day, glitzy fairy-tale-esque gowns by night. Joining the ranks of Kylie Jenner and Rihanna, Hadid has become a force to be a reckoned with, largely due to her “hell with it!” demeanor and penchant for the ’90s. Ahead, we’re sharing 15 of the rising It-girl’s most envelope-pushing and avant-garde looks to date.

1. Dazzling in Blue: Hadid doesn’t show any sign of slowing down at Paris Fashion Week. Her cobalt blue utility jacket and matching trousers rank high on the wow-o-meter. (Photo via Marc Piasecki/GC)

4. Sheer Perfection: Simply enchanted pretty much sums up how we feel about this frothy tulle creation by Christian Dior. Can you say prom do-over? (Photo via Antonio de Moraes Barros Filho/Getty)

5. Killing It in an Orange Teddy Bear Topper: WTF-worthy, man-repelling — call it whatever you want. Hadid slays the outerwear game with her eccentric orange teddy bear topper. Her all-black uniform brings the witchy vibes. (Photo via Alo Ceballos/GC)

7. Deconstructed Trousers: While we’re partial to her fuzzy white slides, it’s her peekaboo lace-up trousers (business on the front, and party from the side) that warrant a double take. (Photo via VMAL/Star Max/GC)

8. All Black Err’thang: In honor of #Wangfest, Hadid shows off her toned abs in an Alexander Wang snake crop top, a punchy yellow crossbody bag, and lavish Freda Salvador slides. It doesn’t get much more off-the-clock than this. (Photo via Raymond Hall/GC)

9. Athluxury 2.0: Off-duty means off-the-catwalk for this leggy supermodel with big-city sensibilities. She gives the athleisure trend her own spin by teaming a tight cropped white tee with high-waisted pinstripe trousers and plain white sneakers. (Photo via Gotham/GC)

10. Bella’s Take on the Naked Dress: THAT dress (you know the one). As if you could forget the sheer, crystal-embellished Ralph & Russo bustier gown Hadid wore to the Cannes Film Festival. Can’t. Stop. Staring. (Photo via Mike Marsland/Mike Marsland/WireImage)

11. Modern-Day G.I. Jane: Head-to-toe camouflage isn’t easy to pull off, but Hadid does so without even batting an eyelash — but in all fairness, she could rock a paper bag and still look très chic. She leads the fashion pack with her baggy camo jumpsuit, combat-style boots, and black cap. (Photo via Marc Piasecki/GC)

13. Slay in Power Red: Even this glamazon knows how to dial it down on occasion. See exhibit A: Hadid makes running errands in NYC look almost too easy in her fire engine red skirt suit and chunky Nike trainers. (Photo via Team GT/GC)

14. Cher Horowitz Would Be So Proud: Hadid doesn’t play by the rules; she makes them up as she goes. While in the City of Light, she successfully channeled her inner Cher Horowitz with a promiscuous tartan tie-front blouse, skin-tight mini, and kicky white ankle boots. (Photo via Marc Piasecki/GC)

15. Slay from the Back: We’re still buzzing about the glittery Alexander Wang catsuit Hadid rocked to the 2017 Met Gala. Between the plunging back and the red carpet starlet’s fierce stance, this just may be Hadid’s most risqué look to date. (Photo via Karwai Tang/WireImage)