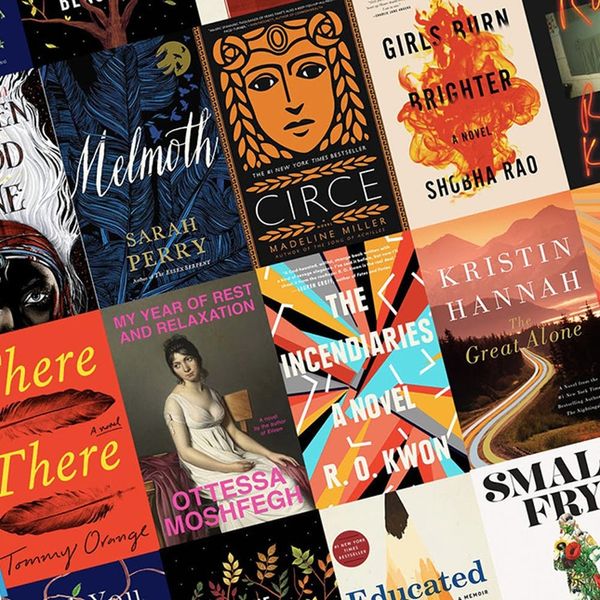 We can probably all agree that this year has called for some escapism. Fortunately, the literary world has provided, serving up tales from remote wildernesses and bygone eras to stories about fierce friendships and haunting mythologies. Read on for our retrospective of the year’s best reads — fiction and nonfiction — of 2018.

Romy Hall — a single mother with a young son and a former dancer at a San Francisco strip club — is now serving two life sentences at a California women’s prison. Based on years of research inside the state’s penal system, Kushner’s insightful drama unfolds Romy’s backstory alongside both a hilarious and harsh look at life behind bars. For a novel set inside a prison, it’s startlingly expansive.

The Song of Achilles author spins another retelling with this fast-paced feminist epic about the eponymous sorceress. Anyone who read Homer might recall how Circe turned his sailors into pigs and eventually becomes Odysseus’ lover, but Miller also skillfully reinvents classic scenes from Greek mythology. Multifaceted, evolving, and complicated — for an immortal, our heroine is beautifully, imperfectly human.

In this sharp, spare, and propulsive debut, three Korean-Americans meet at an elite university. Scholarship kid Will transferred from Bible college after a crisis of faith, and he falls quickly for Phoebe, a glamorous party girl wrestling with guilt over her mother’s recent death. She’s drawn into a cult led by John, a charismatic former student who was captured by the North Koreans. But when John’s group commits a fatal crime and Phoebe disappears, Will must unravel the mystery.

Despite being intelligent, attractive, and privileged, Moshfegh’s unnamed narrator is deeply unhappy. (Who hasn’t been there, amirite?) Cue a cocktail of Ambien and Xanax, and she has a DIY coma. Fortunately, this darkly funny, redemptive story is anything but a snooze-fest.

In this arresting, unflinching, and inspirational memoir, Westover writes of her Mormon fundamentalist upbringing in the remote Idaho mountains. Her father banned his seven kids from dairy, doctors, and school, but she cuts ties and finds her calling in higher education — eventually attending Harvard and Cambridge. The true tragedy of this beautiful work is the need to lose her family to find herself.

Adeyemi’s gorgeous debut, the first in a young adult trilogy, seamlessly melds West African mythology and Black Lives Matter ethos together. Zélie lost her mother after a tyrannical king sentenced all magi to death, but she’s fighting to restore magic to Orïsha and free her people. It’s a brutal tale of revolution and star-crossed love.

A dozen urban Native Americans have disparate goals at the Big Oakland Powwow, but the event will instead alter each of them. Both a suspenseful page-turner and a powerful perspective on an underrepresented slice of American life, Orange’s fervent debut leaves readers unavoidably changed as well.

British translator Helen has retreated to Prague, attempting to atone for a wrong she committed decades earlier. But when her friend disappears after ranting about a monster called Melmoth who appears to culpable individuals, she’s haunted by a shadowy figure — and a reckoning with her own past. Perry’s heartbreaking, redemptive gothic masterpiece is perfect for curling up on chilly nights.

In an Indian village, two girls with limited marriage prospects — Poornima is unattractive and headstrong, Savitha is vivacious but desperately poor — develop a sustaining relationship. When tragedy separates them, their paths cross the globe on a desperate search to reconnect. It’s an affecting, vivid meditation on the powerful bonds of female friendship.

Vietnam POW Ernt Allbright has returned to his family a shattered man. After he impulsively moves his wife and 13-year-old daughter, Leni, to Alaska to live off-the-grid, his mental state further deteriorates and the family must fight for their survival. Set against the cultural upheaval of the 1970s, The Nightingale author’s emotional family saga is sure to capture readers.

A finalist for the National Book Award, Makkai’s poignant, striking novel weaves together two narratives about the 1980s AIDS crisis and its effects on survivors’ lives today. Art gallery director Yale watches his friends die all around him and goes into a tailspin when his former partner tests positive too. Then in 2015, Fiona, one of his friend’s sisters, travels to Paris to reconnect with her daughter, who disappeared after joining a cult. Both strands pack a potent emotional punch.

Sure, Steve Jobs may be the patron saint of our iPhones, but he was also a mercurial, emotionally distant father. Brennan-Jobs, the Apple founder’s daughter, writes about her childhood loneliness and longing for his affection in her raw, riveting memoir about their complex relationship.

In the summer of 1969 on New York’s Lower East Side, four teenage siblings visit a fortune teller and learn the dates of their deaths. Although (spoiler) each life plays out on schedule, Benjamin examines how they choose to live and whether destiny controls us — or vice versa. This family chronicle is ambitious, moving, and wise.

A young book editor launches into a relationship with an older, award-winning novelist; an Iraqi-American economist is detained at Heathrow while traveling to visit family in Iraq. Halliday’s innovative tale skillfully balances these two seemingly disconnected sections and, ultimately, stuns.

This critically praised debut memoir recounts Korean-American Chung’s childhood adoption by white parents in a predominantly Catholic Oregon town. When she decides to find her birth parents — and becomes a mother — her world is changed in both ordinary and astounding ways.
Asher Fogle Paul
Asher is a human interest and entertainment journalist. She was previously Features Editor at Good Housekeeping and Books Editor at Us Weekly, and her work has appeared in People, Allure, Marie Claire, Cosmopolitan, PureWow, and other outlets. When not writing, she's likely sipping iced coffee, wrangling her two small children, and sneaking peeks at a novel.
Best of 2018
Creativity
Best of 2018 Books Gifts Goods
More From Creativity