Things Are Getting ‘Super Emotional’ on the ‘Big Bang Theory’ Set 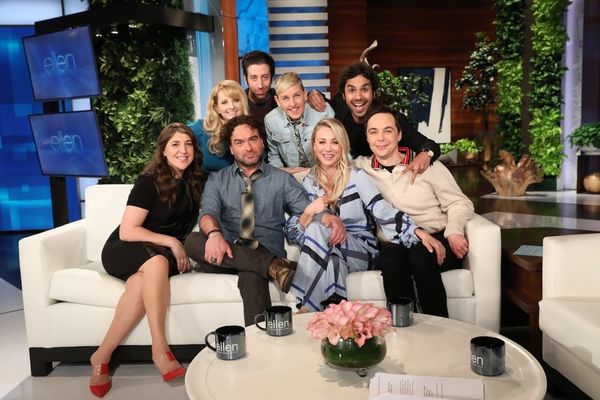 The Big Bang Theory will come to an end in May, and as filming on the final episodes begins to wind down, the stars are having an increasingly difficult time keeping their emotions in check. During an appearance on The Ellen DeGeneres Show on Thursday, January 31, series regulars Kaley Cuoco, Jim Parsons, Johnny Galecki, Kunal Nayyar, Mayim Bialik, Simon Helberg, and Melissa Rauch revealed that there have been spontaneous bouts of crying on set, from both the cast and the crew.

“We’ve been getting super emotional,” Cuoco, who plays Penny on the hit series, admitted to DeGeneres. She went on to describe a recent day when she and Galecki were blocking a scene in rehearsal and she broke down. “Out of nowhere I just started bawling,” she recalled.

She wasn’t alone in her tears, though. “The crew, the camera guys, they come out and they’re like, ‘We’re so glad you cried because we’ve been waiting to cry,’ and they all gave us this huge group hug, and we just all cried for like 10 minutes.”

Parsons, who plays Sheldon, said that he hasn’t cried yet, but admitted, “I have a very deep fear, seriously, that the most unexpected thing is going to happen and I’m going to absolutely lose my sh*t. It really is profound, the amount of time in your life, and I think it’s more than any of us, I think, can get a grip on, and I’m worried it’s going to trigger something deep down like, ‘Oh, I didn’t know that was there! Oh, that hurts!'”

For Galecki, AKA Leonard Hofstadter, the end of the show “still feels very hypothetical.” He told DeGeneres it’ll probably hit him near “the end of this coming summer, when we generally would be meant to come back.”

Nayyar, who plays Raj, cut in to joke, “When we’ll be unemployed, we’ll really be crying.”

One of the reasons it’s so emotional, according to Cuoco, is that they all still really love their jobs. “When we started, you don’t ever think anything like this is going to happen,” she explained. “What’s so sweet is even after all these years, and really up until recently … we come in, we’re like, ‘Did the show do well last night? Really? They watch? That person?’ And we kept that for so long. We never just kind of said, ‘We’re all good now.'”

Do you think you’ll cry while watching The Big Bang Theory finale? Tell us @BritandCo!